Arizona’s season opener against NAU at Arizona Stadium on Sept. 2 is 11 days away. To go along with the countdown to kickoff, this site will publish the Top 50 games in Wildcat football history.

strong>WHY IT MADE THE LIST: UCLA’s loss to Miami 25 days before this Holiday Bowl showdown cost Arizona a shot at its first Rose Bowl (albeit as a second-place team in the Pac-10 with the Bruins playing for a national title in the Fiesta Bowl).

Nevertheless, the Wildcats played as if they wanted to be in San Diego. 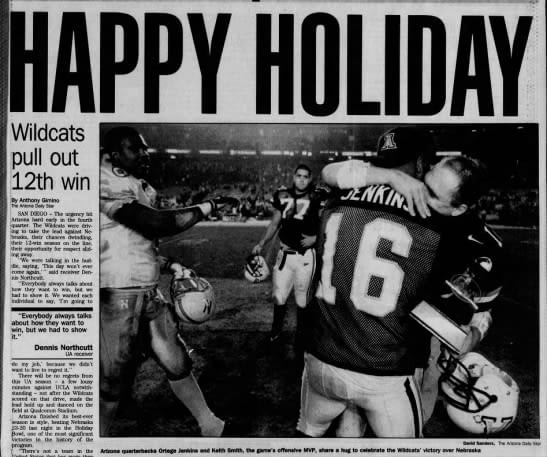 That’s a testament to Dick Tomey’s ability to keep the 1998 team focused. Facing the storied program of Nebraska, which was the defending national co-champs, helped Arizona’s motivation. The Wildcats secured the school’s best record (12-1) in the program’s history and earned their highest ranking to end the season at No. 4. The Holiday Bowl was also the most watched of any college game in ESPN history at that time.


“He kept telling us the ‘N’ (on Nebraska’s helmet) stood for ‘Not today,’” former UA receiver and special teams player Brandon Nash told TucsonCitizen.com’s Anthony Gimino in a 2009 article.

“Every time we saw that helmet, he wanted us to think, ‘Not today, not today.’ You look back at that now, and it sounds so corny, but that has stuck with me forever and it was very motivating back then.”

The Wildcats’ victory was a new experience for the Huskers (9-4), who saw their four-game winning streak in bowl games terminated. It was the first four-loss season for Nebraska since 1968. The defeat denied Frank Solich in his bid to become the school’s first coach to win 10 games in his first season.

Arizona’s defense held the Nebraska option rushing attack to 87 net yards — the Huskers’ second-lowest output of the season — and the Wildcats broke free for 14 fourth-quarter points to win.

Unanimous All-America cornerback Chris McAlister intercepted two passes, one which turned the Huskers back on their final drive with less than four minutes remaining. He also had a 78-yard reverse punt return called back because of a questionable illegal blocking call.

After Arizona trailed 13-9 at the half, the teams were at a stalemate through most of the third quarter before Arizona’s Dennis Northcutt gave the Cats some decent field position with a 16-yard punt return to start a 10-play scoring drive. Trung Canidate rushed five times for 37 yards in the drive, and Keith Smith completed passes of five yards to Northcutt and Paul Shields before completing a 15-yard pass to Brad Brennan for the score.

“The first thing I think about in that game is Brad Brennan’s catch,” Smith told Gimino. “There was a lot of pressure at that point of the game.

“We kind of looked at each other, and he broke off his route into a skinny post. I knew I had to zip it in there, and I threw it as hard as I could. He split two defenders and was excited to come out of that thing alive.”

Nebraska answered and regained the lead at 20-16 following an 88-yard drive, almost exclusively through the air.

With 10 minutes remaining, Smith opened Arizona’s next drive with a seven-yard pass to Shields, then the Cats ran the ball eight straight times for the nine-play, 68-yard drive which produced the final score of 23-20 on a Kelvin Eafon one-yard plunge. Smith had runs of 20, eight and eight yards to set up the score.

Arizona turned back the Huskers with McAlister’s second pick and then later used enough clock with a first down to force Nebraska to get the ball back with 34 seconds remaining. One short completion and three incompletions, and the game was over.

Embed from Getty Images
McAlister’s interception is one of the most memorable plays in the program’s history. He leaped high to snag the pass from Nebraska freshman Eric Crouch on a third-and-11 play from the Arizona 46. McAlister started the season with a kickoff return for a touchdown at Hawaii. He ended the season with another big play.

“This is the happiest and saddest time of my life,” McAlister, a senior playing his last collegiate game, was quoted as saying by the Associated Press. “This was a tremendous win for the University of Arizona, and that makes me very happy. But I’ll never get to strap on my helmet as a Wildcat again … and that’s the sad part. I can’t believe it’s over.”

Canidate ran for 101 yards on 22 carries. Smith, who completed 11-of-19 passing for 143 yards and ran for 25, was named Holiday Bowl Offensive MVP. UA’s Mark McDonald, who was 8 of 17 in field goals during the regular season, had a 3-for-3 performance, including a career-long 48-yarder.

“That game felt different than any game I played in at Arizona,” Smith told Gimino. “It kind of felt like what I thought the Super Bowl would feel like. It was like the lights were brighter. It was different. It was definitely fun to play in. It was probably the most fun I had in a football game.”