Arizona’s season opener against NAU at Arizona Stadium on Sept. 2 is 10 days away. To go along with the countdown to kickoff, this site will publish the Top 50 games in Wildcat football history.

WHY IT MADE THE LIST: For the second straight year, Arizona took it to Oregon, beating the highly-ranked Ducks. This game merits top 10 status in Arizona’s Top 50 games because of the magnitude of the victory.

The unranked Wildcats went into one of the most difficult places in the nation to play — Autzen Stadium in Eugene — defeated the No. 2-ranked team in the nation that featured the Heisman Trophy winner by season’s end. Marcus Mariota eventually led the Ducks to the national title game. 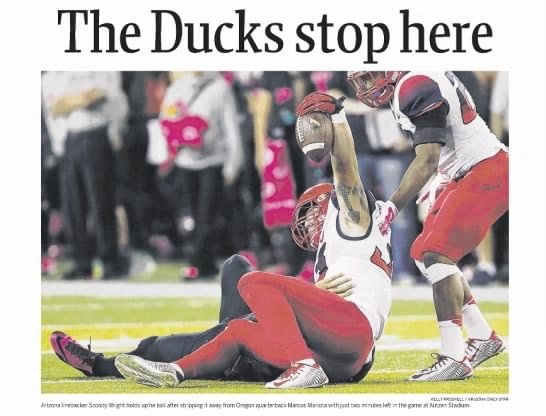 The only road victory to top this one in the Arizona annals against ranked teams is the Wildcats’ upset of No. 1 USC in Los Angeles in 1980.

It was the third time since 2007 that an unranked Wildcats team upset an Oregon squad ranked in the top five.

Mariota was impressed by the Wildcats, who entered the game as 24-point underdogs.

“They’re undefeated,” he was quoated as saying by the Associated Press. “It’s obviously a testament to our conference. If you’re not prepared each week, if you’re not ready to play, you’ll lose.”

Arizona’s true freshman running back Nick Wilson ran for two touchdowns and caught a scoring pass from redshirt freshman quarterback Anu Solomon to help the Wildcats open the season with five straight victories for the first time since 1998.

Senior running back Terris Jones-Grigsby pounded his way into the end zone from a yard out for the tiebreaking touchdown with 2:54 left. Arizona All-American linebacker Scooby Wright III sacked Mariota, stripped the ball from him and recovered the ball to secure the win.

With his team trailing 24-14 going into the final quarter, Oregon’s Matt Wogan made a 21-yard field goal. Mariota then hit Keanon Lowe with a 9-yard scoring pass to tie it with 8:21 left.

The Ducks (4-1, 1-1) sacked Solomon on third-and-8 on the next possession, but Tony Washington was called for unsportsmanlike conduct to give the Wildcats a first down.

A pass interference call got Arizona closer for Jones-Grigsby’s go-ahead touchdown. And on Oregon’s ensuing series, Wright took the ball away from Mariota.

Arizona then gained a clinching first down on the ground and ran out the clock, silencing Autzen Stadium’s 100th straight sellout crowd.

Mariota, who hugged Rodriguez after the game, threw for 181 yards and a touchdown. The quarterback also caught a TD pass but was sacked three times and turned the ball over for the first time all season.

“Last year it was really heartwarming because it was the seniors’ last home game and it was improbable, of course,” Rodriguez said. “This one, I don’t know if anybody picked us. I don’t know how many people were talking about us, but I bet you most of them weren’t thinking this was going to happen, not on the road.”

In the previous year, the No. 5 Ducks lost to Arizona 42-16 in Tucson, dashing any hopes Oregon had of winning a national championship. The blowout victory was Arizona’s first over a top-five team since knocking off No. 2 Oregon in 2007. It featured Ka’Deem Carey breaking Arizona’s career records in rushing yards and rushing touchdowns.

In the upset at Eugene, Solomon held his own against Mariota, a fellow Hawaiian, throwing for 287 yards and a touchdown for Arizona.

Arizona served notice in its first drive of the second half it was prepared for the major upset. It opened the second half with a six-play, 80-yard drive capped by Wilson’s 3-yard touchdown run to go up 10-7.