Arizona’s season opener against NAU at Arizona Stadium on Sept. 2 is six days away. To go along with the countdown to kickoff, this site will publish the Top 50 games in Wildcat football history.

WHY IT MADE THE LIST: One of the greatest plays and games in the history of Arizona football could have been altered if Max Zendejas did not change his mind and remained on the team bus after hastily going there at halftime. 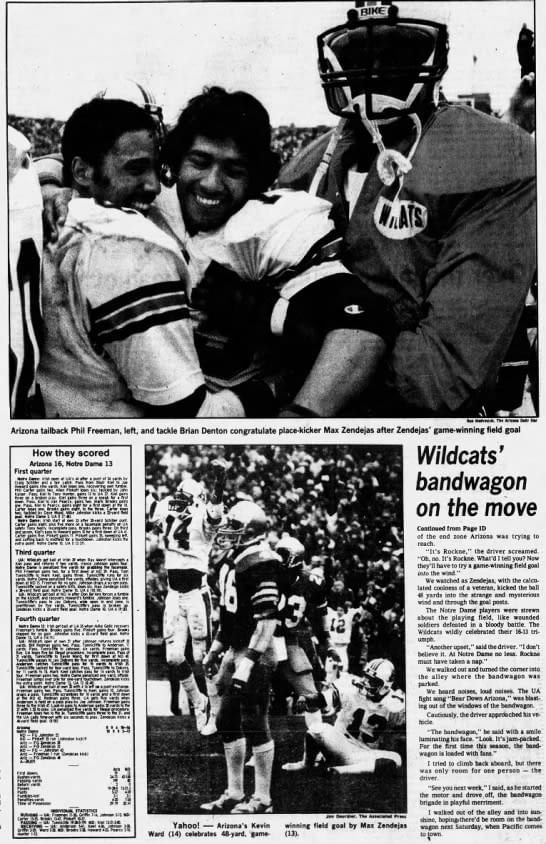 “I was thrilled for the Arizona players and coaches, but from a professional standpoint, the Notre Dame win was the most frustrating day for me ever at the Tucson Citizen, well, except for the day the paper shut down. The Citizen came out earlier on Saturday afternoons than on weekdays, but columnist Corky Simpson and myself begged the publisher and managing editor to push back the press time so that we could have same-day coverage of the game. We both thought after the way UA had played against UCLA that the Cats matched up well against the Irish. We could have promoted it all that week – Saturday’s home delivery will be later than normal to bring you same-day coverage of the game. They wouldn’t budge. We could have sold thousands of papers! So my story for the paper, which was more than 48 hours by the time it was published, focused on a fiery halftime speech by assistant coach Tom Roggeman. Oh, by the way, even if Zendejas had missed the game-winner, UA would have gotten another chance because Notre Dame’s Dave Duerson roughed Max on the kick.”

“The win in South Bend was one of the most prestigious simply because it was in South Bend and Notre Dame was still an elite program back then. The winning field goal shot was priceless because it was at the end zone with ‘Touchdown Jesus’ in the background and there is a great picture of the winning score, the sad faces of the Irish fans and Touchdown Jesus in the background. That win on the road in South Bend put UA on the map nationally. At the season-ending banquet, Larry (Smith) would always present the Seniors with a book called “The Edge”. He had the big wins embossed on the inside cover. One by one the Seniors read those scores of victories over #1 USC, Notre Dame, and ASU (in 1982). The ASU wins always got the biggest round of applause.”