In an interesting bit of Tucson sports history, Gordie Howe, arguably the greatest hockey player ever to play the game visited the then 4-year-old Tucson Arena, current home of the Tucson Roadrunners 42 years ago, in October of 1975. Affectionately nicknamed Mr. Hockey, Gordie Howe is one of hockey’s all-time greats and one of the greatest athletes of all time. Gordie Howe had an incredible professional hockey career that lasted from 1946-1971 and 1973 to 1980. 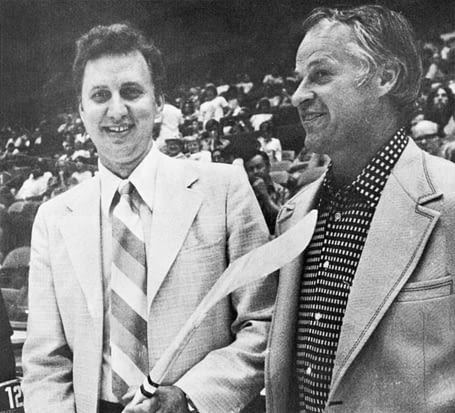 Born March 31st, 1928 in Floral, Saskatchewan Gordie Howe was hockey’s first global superstar. His skill, consistency, and likability are often credited with giving hockey the popularity to expand from a regional sport with just 6 NHL teams in the North to the 31-team major league it is today. Gordie Howe is to Hockey what Babe Ruth is to baseball. They are legendary figures, forever etched in the imagination of fans, and are among the first names young players learn when being taught their respective sports’ proud and storied histories.

During the first phase of his career between 1946 and 1971, Mr. Hockey dominated the league like no one before. In his 24 seasons with the Detroit Red Wings, Howe rewrote the record book, holding nearly every scoring record at the time of his first retirement (although many of these would be later broken by Wayne Gretzky during the NHL’s high-scoring era in the 1980s).

Gordie Howe won the Stanley Cup four times during the early 1950’s Red Wings dynasty, led the NHL in goal scoring 5 times between 1951 and 1963. Gordie won the Art Ross trophy as the league’s point scoring champion 6 times between 1951 and 1963, won the Hart Memorial Trophy 6 times as the League’s MVP, and remains second on the NHL’s all time leading goal scoring list with 801 goals.

Gordie Howe skating behind the net as a member of the Detroit Red Wings.
Source: theHockeyNet

Mr. Hockey’s greatest quality was his consistency as he still holds the record for the most consecutive 20 goal seasons in the NHL with 22. More incredible records that still stand to this day are his 23 NHL All-star game appearances and most games played with a single NHL franchise; playing 1,687 regular season games with the Detroit Red Wings. Because of Howe’s toughness and skill, he has long been the namesake for the hockey term for when a player gets a goal, an assist and a fight in a single game; known as the Gordie Howe Hat trick.

At age 40, he even managed to score 103 points in 76 games during the 1968-69 season. A few years later however, a recurring wrist injury forced Gordie into his first retirement after the 1970-71 season at the age of 43. He was immediately inducted into the Hockey Hall of Fame and took a job in the Red Wing’s front office.

Growing tired of his front office job with the Red Wings and having plenty of gas left in the tank; Gordie had an operation to fix his wrist so he could pursue his dream of playing with his sons Mark and Marty. Gordie Howe had two sons that would play in the WHA and later the NHL; Marty and future Hall of Famer Mark Howe.

The World Hockey Association (WHA) was founded in 1971 to serve as a major league rival to the NHL, playing in many markets neglected by the NHL. The WHA had a lower entry age than the NHL, which encouraged both Mark and Marty Howe to join the new league as both players signed contracts with the Houston Aeros. With both of his sons going to Houston, Gordie signed a contract with the Aeros at the age of 45.

His signing was not just a publicity stunt, centering a line with Mark and Marty on the wings, Gordie scored 100 points in 70 games and was named league MVP in his first WHA season. Meanwhile, he led Houston to back-to-back Championships in 1974 and 1975. The Howe family played with the Aeros until 1977 when he and his sons joined the New England Whalers (later Hartford).

When the WHA and NHL merged leading into the 1979-80 season, Gordie and his son Mark were still on the Hartford Whaler’s roster (today known as the Carolina Hurricanes). Howe turned 52 by the end of the season, making him by far the oldest player to ever play for a major league team.

During his first and last NHL season with the Whalers, Gordie defied father time, playing in all 80 games. He and Mark became the first and as of 2017, the only father-son combo to play together in the NHL on the same team, at the same time. In the 1979-80 season, Gordie scored 15 goals, 26 assists, and 41 points, leading the Whalers to their first ever NHL playoff appearance. His final NHL goal is shown above, fittingly, Mark got the primary assist on it.

In one of the most famous moments in hockey history, Howe made his 23rd and final NHL-all star game appearance. As fate would have it, the 1980 all star game was being held at the then brand-new Joe Louis Arena in Detroit, Michigan; the city where Howe built his legendary status.

Shown in the video above, when Gordie was introduced, the Detroit fans erupted in applause and gave Mr. Hockey a standing ovation for several minutes. Gordie Howe’s return to Detroit is among my favorite moments in sports history; Hollywood couldn’t have written a better ending for his unbelievable career.

Much of this article was devoted to explaining the legend of Gordie Howe because it explains why his visit to Tucson Arena was so special.

During his tenure with the Houston Aeros, the WHA launched a minor league, the original Central Hockey League. This league gave Tucson its first minor league hockey team, the Tucson Mavericks. They played at the Tucson Arena and served as the shared minor league affiliate of the Houston Aeros, Denver Spurs, and the original Phoenix Roadrunners.  Being the great ambassador for the game that he was, Howe visited Tucson Arena in October of 1975, the same building that the Roadrunners still play in to give the Mavericks some free publicity and to explain why Arizona was ready for hockey.

In my opinion, Gordie Howe is not only the greatest hockey player of all time; he is the greatest athlete of all time. Howe played a record 1,767 games in an NHL that was tougher and more physical than it is today, all without a helmet. His unrivaled consistency, toughness and the mind-blowing feat of playing in a major league at 52 puts Gordie in a league of his own. He was the childhood idol of countless great players that followed including Wayne Gretzky, who to this day insists that Gordie Howe was the greatest player ever to play the game.

Howe played an NHL game in 5 different decades, the 40s, 50s, 60s, 70s, and 80s. When he entered the league, World War II ended only a year earlier and when Howe retired Ronald Reagan was elected president just six months later. The fact that an athlete of Howe’s caliber visited our arena to promote Tucson minor league hockey is an amazing piece of Tucson Sports History that gives our building that much more character.