This is what Sean Miller must deal with this season … well, along with a few other things.

But his team is so loaded with talent that he asked his team to conduct a silent evaluation of how many minutes and points they will have on average this season. First, he said there are only 200 minutes a game and on a good day a team will score 80 points or there about on any given night.

It’s an occasional experiment Miller does just to get a gauge of what he has to work with mentally, finding out what each player feels they can accomplish in a realistic role. 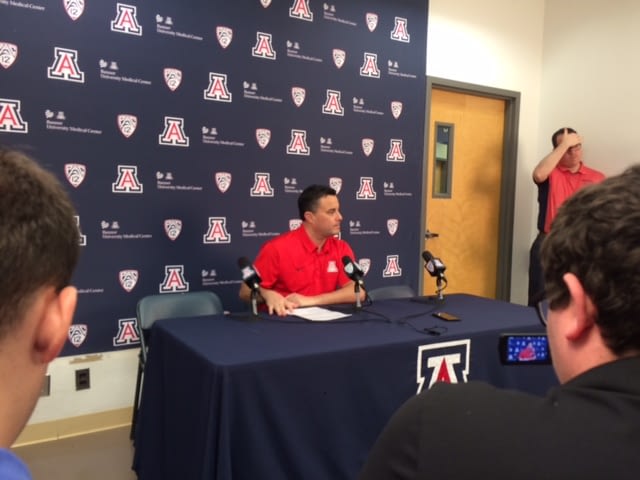 Sean Miller speaks to the media after the Red-Blue Game (Photos by Steve Rivera/AllSportsTucson.com)

What he found out was of the top 12 players he has, they will combine for 263 minutes and the team will average 156 points.

“That is the truth,” he said. “It’s not an exaggeration.”

He joked he’d have to petition the NCAA for more minutes in a game.

He said when the player’s filled that out, the player’s intention was “pure” but it “goes to show where young people’s heads are in their expectations are in the month of October versus the reality of November.”

It gets even tighter as the season goes on, given the depth and rotation tightens. It has every year for Miller.

But with a couple of weeks before the first game, Miller said he likes what he sees when it comes to chemistry and camaraderie.

“The team’s chemistry is always a lot more spirited at the beginning,” Miller said, knowing the team hasn’t sat on one bench this season.

He added later: “I do like where our guys are now despite what I told you” about the minutes they expect.

What he did like – and he hit on the point a few times on Friday night after the Blue Team beat the Red Team 55-37 at McKale Center – was that the freshman class is the best he’s had since becoming the UA basketball coach.

Deandre Ayton is clearly the center-piece, given his ability to do so much. He can go inside and outside and be dominating.

Brandon Randolph, who won the dunk contest, is athletic and versatile.

Alex Barcello is smart and tough.

Emmanuel Akot can play on the perimeter and play a power forward spot.

Ira Lee is deceptively versatile and can play multiple positions.

And then you have the veterans who already know their roles.

Now, it’ll be get in where you fit in for the Cats. The chemistry will help.

“It’s great,” said Parker Jackson-Cartwright of the chemistry. “(There are) a lot of different characters on this team and everybody meshes pretty well. (Arizona has) younger guys and older (ones). It’s a fun environment playing each other on and off the court.”

The depth doesn’t hurt, making practices tough as well as competitive, which helps build that chemistry.

“That’s what’s great about having depth there are a lot of talented kids because we can compete at a high level against each other,” said junior Allonzo Trier. “We’re pushing each other to reach new heights. We’re really grinding.”