The Arizona Wildcats know their bowl fate and their opponent.

They are headed for the first time in program history to the Foster Farms Bowl in Santa Clara, Calif., on Dec. 27 against Purdue of the Big Ten. 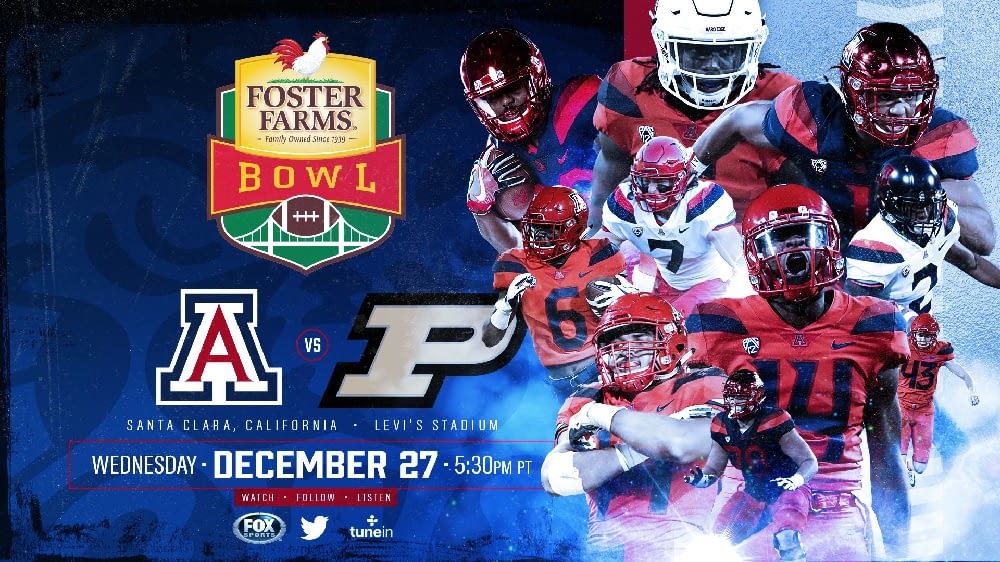 Factors involved: Khalil Tate was once a Heisman candidate during the season when he led the Wildcats to four consecutive wins, ASU is without a permanent head coach for its bowl game and the Wildcats finished one game ahead of the Ducks in conference play.

Arizona has played only two games against Purdue, when the Wildcats’ program was at one of their lowest points — in 2003 and 2005. The 2003 season was John Mackovic’s last with Arizona. The 2005 season was only the second year of Mike Stoops’ rebuilding job.

Purdue enters the game on a two-game winning streak, including a 24-15 win at Iowa on Nov. 18. The Boilermakers have a stout rushing defense that will be charged to match up against Arizona’s potent running game led by Tate.

Purdue is No. 30 nationally allowing only 133.3 rushing yards per game. Arizona ranks No. 3 in the nation with 324.4 yards rushing a game.

The Boilermakers, playing for first-year coach Jeff Brohm, are going to a bowl game for the first time since the 2012 season.

Arizona coach Rich Rodriguez was 1-2 against Purdue as Michigan’s coach from 2008 to 2010. His 27-16 win over the Boilermakers in West Lafayette on Nov. 13, 2010, was actually his last win as Michigan’s coach. The Wolverines lost their last three games of that season afterward and he was fired.

One Arizona tie exists with Purdue: Former Arizona linebackers coach Kevin Wolthausen is the special teams coach for the Boilermakers.

Purdue was competitive in most of its games – lost by 7 to Louisville, by 8 to Wisconsin, by 2 at Rutgers, by 1 to Nebraska.

But if Khalil Tate is healthy and available, Arizona rolls.#analysis

He joined Arizona as a graduate assistant for a pair of seasons (1983-84) before becoming full-time with the Wildcats as the outside linebackers coach in 1985 and defensive line coach in 1986.

In 1987, Wolthausen followed head coach Larry Smith from Tucson to USC, where he helped guide the Trojans to three Rose Bowl appearances in six seasons (1987-92).

After spending two winning seasons as the defensive line coach at Oklahoma in 1993 and 1994, Wolthausen moved on to Arizona State, where he worked with same defensive unit. With Wolthausen on staff, the 1996 Sun Devils came up just shy of winning at least a share of the school’s first national title after falling to Ohio State 20-17 in the final seconds of the 1997 Rose Bowl. ASU finished the year ranked fourth nationally with an 11-1 record.

Former Arizona coach Jim Young, who resides in Tucson, went from Tucson to West Lafayette in 1977 to coach the Boilermakers. He coached Purdue from 1977 to 1981.