Sunday afternoon, in the fourth game of their current five-game homestand, the Tucson Roadrunners lost 4-2 to the Ontario Reign, AHL affiliate of the Los Angeles Kings. Also notable, the Roadrunners had their second annual teddy bear toss.

A teddy bear toss is a special event commonly put on by minor league hockey teams, where after the home team’s first goal of the game, fans are allowed to throw teddy bears on the ice. All teddy bears were donated to charity after the game.  Sunday was also Tucson’s first game without Dylan Strome since the season opener, as he earned a call-up to the NHL earlier this week.

If you would like to know more about the teddy bear toss CLICK HERE, to read AllSportsTucson.com’s  Jose Roman Jr.’s article. 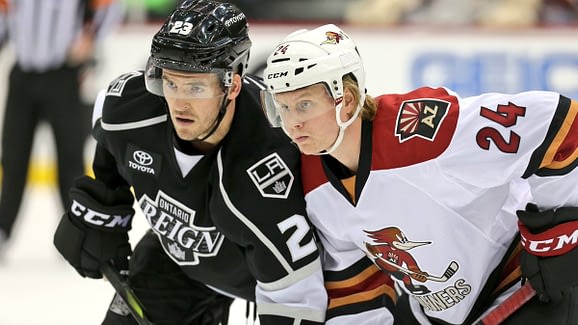 Ontario quickly jumped out to a lead, making the score 2-0 before the game’s 7th minute was over; the goal scorers for Ontario were Michael Mersch and Justin Auger. Despite having many quality scoring chances and registering 12 shots on goal, the Roadrunners were held off of the scoresheet in the first.

Down 2-0 heading into the second, Tucson stepped up their game and played an excellent 20 minutes of hockey, outshooting Ontario 12-4 in the period. Just over 12 minutes into the period, Tucson defenseman, Kyle Capobianco sent the teddy bears flying, burying Tyler Gaudet’s pass with a one-timer.

Despite Tucson’s dominance in the period, Ontario widened their lead to 3-1 as the screened Roadrunners Goaltender, Hunter Miska, let in his third goal of the game. The goal gave Ontario a ridiculous 25% shooting percentage in the second, compared to Tucson’s 8.3%.

Unfortunately for Tucson, Ontario’s luck did not run out in the third, as Tucson and Ontario scored one goal apiece for a final score of 4-2 on the night. This happened despite Tucson once again carrying the play in the third, outshooting Ontario 16-3 in the period and 40-21 on the night.

Yesterday was a tough loss for Tucson, by all accounts, they outplayed Ontario and without a doubt deserved the win. They had nearly twice as many shots on goal as Ontario in the game and had four times as many shots as Ontario in the latter two periods. Ontario was only competitive with Tucson in the first period, where they held a narrow 14-12 shot advantage.

Tucson didn’t win this game for two reasons; they ran into a hot goalie in Jack Campbell, and they had a weak first period. Campbell single-handedly won the game for Ontario having just two goals against, and recording an incredible 0.95 save percentage. Tucson’s comparatively weak performance out of the gate was also a key contributing factor in the loss.

Poor first period performances is an issue that has plagued Tucson all season long and is the only major flaw in their game I have observed in what has otherwise been a great season. Head Coach Mike Van Ryn also said he was proud of his team in his post-game comments

“I don’t know what the chances were tonight, but we had more than enough. That happens, you’re going to lose games that you should win, and you’re going to win games you don’t deserve to win and you know that’s the game of hockey. I don’t think there’s any reason for our guys to break their sticks or anything like that. You get weary as a coach when you’re not generating [scoring chances], and I thought they generated a lot [of scoring chances], and they played with speed. And you know, we gave up four [goals]. It was tough and you know we just have to get back to work, and we’ll be better next game.”

Overall, Tucson played a quality game, and there was a lot to like about their style. As coach said, they had plenty of chances, the bounces just didn’t go Tucson’s way, it happens all the time in hockey, and Ontario managed to escape with a lucky win because of it.

The Roadrunners next game is tomorrow against the Reign at 7:05 PM.