Following their previous 4-2 loss to Ontario Sunday, the Roadrunners went 3-for-6 on the power play and bounced back with a 5-2 win over the Ontario Reign. Tucson’s 3 powerplay goals were a season-high for the Roadrunners. Both teams also had changes in goal as Cal Petersen replaced Jack Campbell for the Reign and Adin Hill replaced Hunter Miska for Tucson. 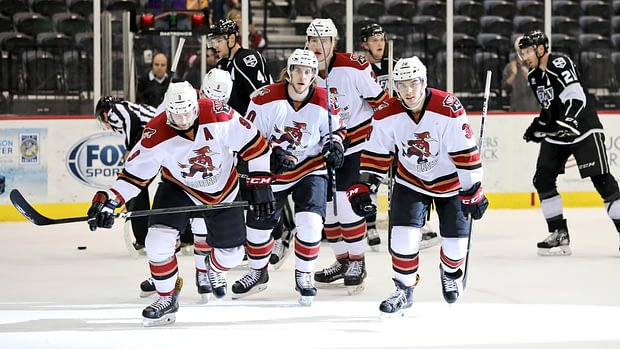 The game started out strong for Tucson, with solid performances and execution throughout the lineup. Jens Looke opened the scoring for the Roadrunners and the game, scoring his second goal in consecutive games on the powerplay. Tucson dominated possession and played a much faster game than Ontario did in the first.

The fast pace, combined with the Roadrunners strong puck possession saw the Reign draw three penalties against Tucson in the first period. Ontario’s lack of discipline resulted in a late 5-on-3 goal from Tucson’s Mike Sislo.

The solid effort seen from the Roadrunners in the first period did not translate into the second. They were outshot 14-3, one of the widest single-period shot-differentials seen in the season. The Reign were also highly opportunistic, capitalizing on both of their powerplays in the period, tying the game.

Tied 2-2 at the start of the third, the Roadrunners got back on track, scoring three unanswered goals to win the game 5-2. The first goal came just seconds in, on their first shot of the period as Tyler Gaudet fired home a one timer from Dysin Mayo. Tucson would strike again on their third shot of the period as Dysin Mayo redirected Conor Garland’s pass into the back of the net.

The final goal of the game would be Nick Merkley’s team-leading 12th of the season, scoring another powerplay goal for Tucson. The win allowed Tucson to snap a two-game losing streak and retain their lead over Stockton in the Pacific division standings

This game was a huge win for the Roadrunners, being their first win of the season without leading-scorer, Dylan Strome in the lineup. Despite playing a good game Sunday, Tucson’s win Tuesday came from their ability to make plays, especially when they had extra time and space on the power play.

On Sunday they kept throwing the puck at the net any chance they had and did not focus as much on getting the quality chances that are very difficult for goalies to stop. Tucson did a great job challenging Ontario’s goalies on Tuesday, which ultimately led them to a very important win.

Tucson’s next game is tomorrow on the road at 7PM against the San Jose Barracuda.