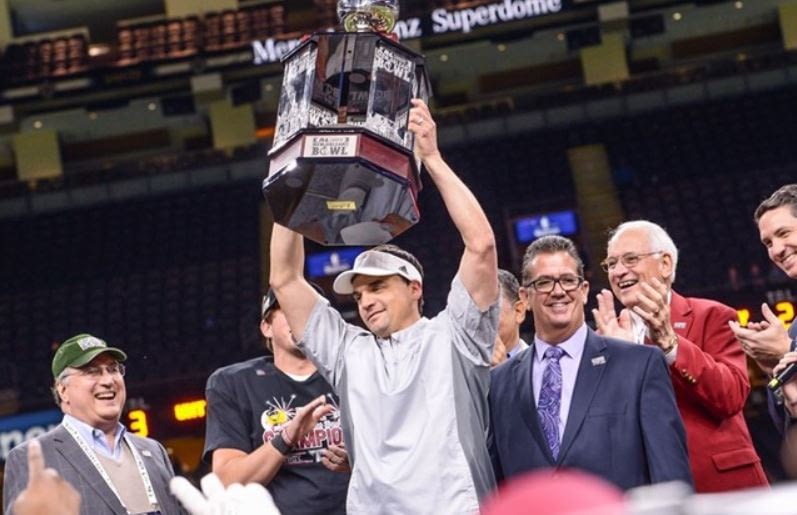 Troy coach Neal Brown has emerged as a candidate at Arizona, and, in fact, already has interviewed for the job, according to a report from a television reporter in Montgomery, Ala.

Brown is not a name that was among the large smattering of initial potential candidates that got thrown around after Arizona fired Rich Rodriguez last week. That’s not to say that someone like former Texas A&M coach Kevin Sumlin isn’t still in the mix, but it sure indicates that athletic director Dave Heeke is keeping options open.

A side note from the National Championship: multiple sources have told me that Neal Brown has interviewed at #Arizona and is a top candidate on their list for the next HC.

So, who the heck is Neal Brown?

Brown is 37 and has a 25-13 record in three seasons at Troy, a member of the Sun Belt Conference. He has won 21 games in the past two seasons, including a school-record 11 in 2017, which was capped by a 50-30 victory over North Texas in the New Orleans Bowl.

He has a signature win

You remember that Troy shocked LSU this season, right?

He was once the youngest offensive coordinator in the country, at Troy as a 29-year-old, and went on to spend three years as coordinator at Texas Tech coach Tommy Tuberville and then two years at Kentucky under Mark Stoops before returning to Troy.

He’s produced high yardage and point totals wherever he’s been.

He grew up in Kentucky and was a receiver at UK and then UMass.

How Neal Brown put the Troy Trojans back on the map

ESPN: Neal Brown put Troy — and himself — on the map by upsetting LSU