Last night in the final meeting of the season between the Wolves and the Roadrunners, Chicago beat Tucson 4-3. For the game, the Roadrunners wore special Olympic-themed jerseys in honor of the AHL players that will be playing in the Olympics. Many AHL players will be going to the Winter Olympics in South Korea next month as a result of the NHL’s decision to not attend the Olympics (for more on that click here). 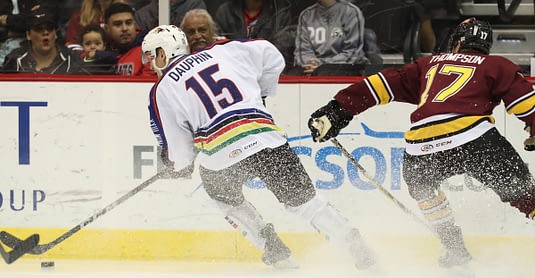 Last night started out strong for Tucson, outshooting Chicago 15-7 in the first period. Chicago tried to play that same type of defensive game that they did Friday night, but they didn’t execute it as well as they did two days ago.

The Roadrunners opened the scoring just over nine minutes into the game, with a shorthanded goal by Mike Sislo. About five minutes later, the Wolves would tie the game with another shorthanded goal. The Chicago shorthanded tally was the result of Tucson defenseman, Kyle Capobianco fanning on a shot, turning the puck over and getting caught flat-footed as he tried to rush back and defend.

Chicago would end up taking a 2-1 lead with 11 seconds remaining in the first as a shot barely trickled past Adin Hill. Having an assist on Mike Sislo’s first-period goal, Tucson center, Laurent Dauphin would add his second point of the night with a game-tying goal, in the second period.

Tied 2-2, the Wolves and the Roadrunners would play very competitive hockey for the remainder of the second period, despite a Chicago holding a 10-6 advantage on the shot clock in the period. The primary difference maker in the second and in the rest of the game was the slew of questionable penalties called against Tucson.

One such call was a 5-minute slashing major penalty and game misconduct that was given to Tucson defenseman, Joel Hanley. Hanley’s major penalty ended up being one of the deciding factors in the game.

To say that Tucson was frustrated with the officiating they were receiving would be a massive understatement. An excellent example of this was Laurent Dauphin getting a ten-minute “abuse of officials” misconduct after aggressively arguing with the referees over a soft goaltender interference call.

Shortly after the Dauphin penalty, Roadrunners captain, Andrew Campbell was given another weak slashing penalty, giving Chicago a 1 minute and 36 second long 5-on-3 power play. Although Tucson was able to kill the 5-on-3 and the remainder of Campbell’s penalty, it deprived them of more than two minutes of valuable even strength time that they could have used to tie the game.

Despite a valiant late third period push by the Roadrunners that included a pair of spectacular saves by Adin Hill, the 4-3 score would hold giving Tucson a loss heading into the All-Star break.

Saturday night was a tough night, tough loss and capped off a strange two-game series against the Wolves. Friday night, Chicago was the better team and deserved to win; they studied how the Roadrunners play, developed a solid game plan and executed it perfectly (for my thoughts and analysis of Friday night’s game click here).

On Saturday night it was the exact opposite, the Roadrunners learned from their mistakes, made adjustments and played a better game. Had it not been for the penalties called against Tucson, the Roadrunners probably would have won the game.

The always honest Tucson Head Coach Mike Van Ryn didn’t hesitate to share his opinions on the calls made against his team last night saying “Those two [the two referees] definitely made their presence felt tonight, and you know I don’t even know what those calls were, I just looked at them. So I don’t even know how they come up with what they come up with half the time and that’s why I lose my mind. I don’t want to lose my mind because it does nothing for your team, but I can’t sit there and watch that, it’s a joke.”

Van Ryn continued “When no one [the refs] know whats going on out there, emotions flare, games get out of control and its happening way too much.”

After asked if he’s excited and looking forward to coaching the Pacific Division All-Star team on Monday he replied “My excitement level is not up at all right now because I’m quite upset about the fact that [the Chicago game] was a big game and for two guys [the two refs] to decide that they’re going to dictate the outcome, it’s not right, it’s not hockey.”

As a former player, it is always frustrating to see referees call too many penalties in close games. In all honesty, the refs had no place calling as many penalties as they did and were way too harsh in their judgments. If it is a close, one-goal game like it was at the end of the third last night, the officials should let the players play and give the players a bit more flexibility because of how much one bad call can influence the outcome of a close game.

But that’s hockey, like in any sport sometimes the officiating helps you and sometimes it hurts. Unfortunately for the Roadrunners, the calls just didn’t go their way, and there was nothing they could do about it.