This time last year, it was the end of the road for the Roadrunners. They finished 6th out of 8 teams in the Pacific Division and were 11 points out of a playoff spot. This year, not only did they qualify for the playoffs; they won the regular season title for both the AHL’s Pacific Division, Western Conference and finished 3rd overall in the entire 30-team AHL. With the Roadrunners capturing their first regular season Western Conference Championship, Tucson is now guaranteed home-ice advantage for the first three rounds of the playoffs and will have home ice in the Calder Cup Finals if they play anyone but the Toronto Marlies or the Lehigh Valley Phantoms.

With the 4-0 road win on Wednesday, which included Adin Hill’s fifth shutout of the season and a two-goal performance from Lawson Crouse, the Roadrunners captured the regular season Pacific Division Title. With the division title locked down, Tucson needed a win on Friday to clinch the regular season Western Conference Championship. 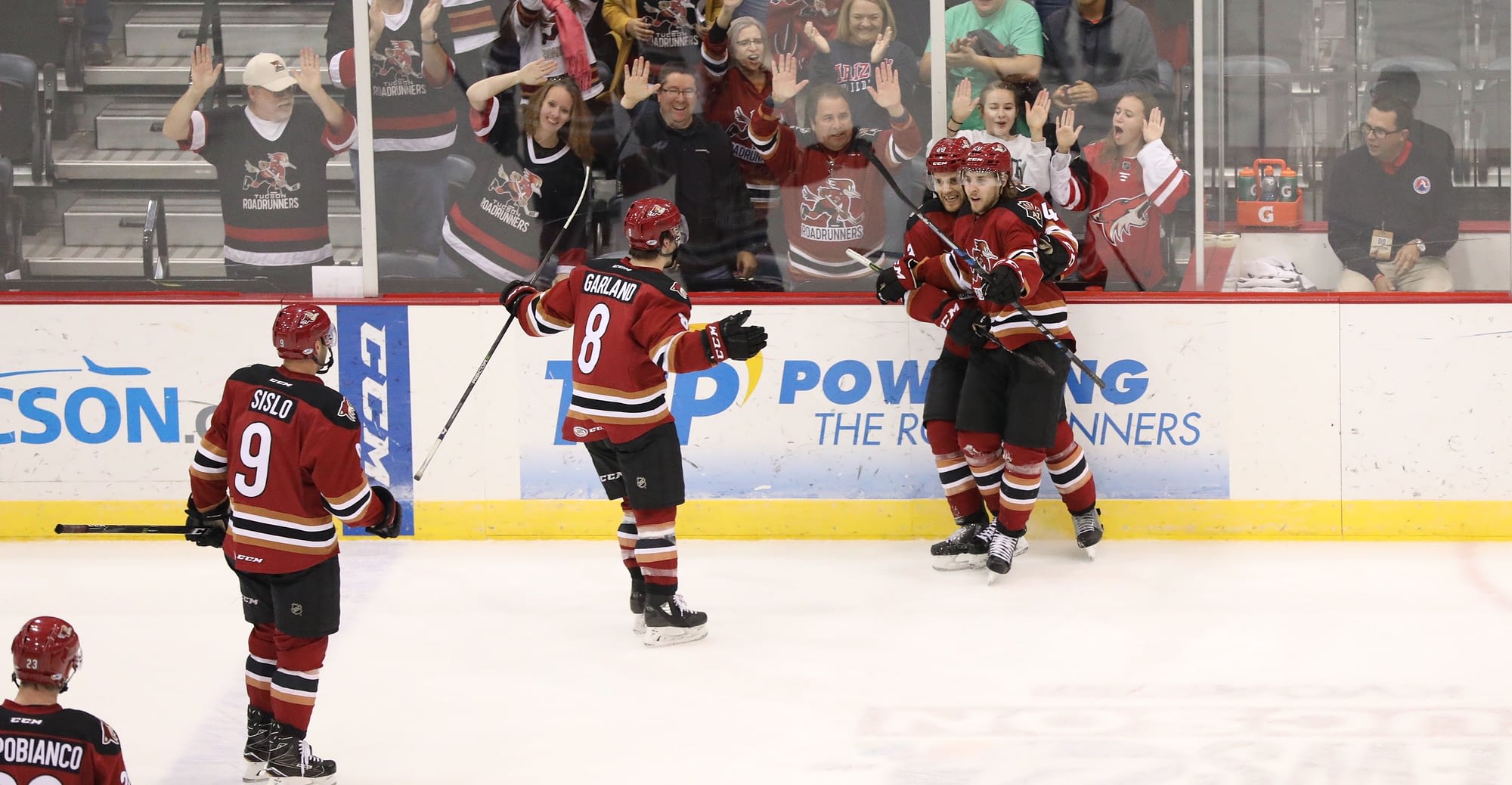 The Roadrunners were slow out of the gate on Friday, getting outshot by San Diego 14-5 in the first period, going eight full minutes without a shot. But Adin Hill, like all great starting goaltenders, stepped up, kept Tucson in the game, and made sure his team left the period with a 1-1 tie. In the final 40 minutes, the Roadrunners found their game, dominated and clinched the Western Conference Title off of a pair of goals from veteran center, Mario Kempe. The Gulls would score again in the second period, leaving the final score at 3-2, with Tucson outshooting San Diego 28-26.

With both the division and the conference locked down, the Roadrunners elected to rest many of their key players including Mario Kempe, Andrew Campbell, Joel Hanley, Ryan MacInnis, and Carter Camper on Saturday. Even when relying mostly on depth players, the Roadrunners were still able to beat San Diego 6-3, ending a brilliant campaign on a high note.

The Roadrunners were able to beat San Diego in three consecutive games despite San Diego playing for their playoff lives. All San Diego needed was one point out of six in the series to clinch a playoff berth, but with Tucson beating them three times in regulation, the Gulls dropped out of a playoff spot, and the final playoff spot went to the San Jose Barracuda.

The playoff picture is set

As the first seed in the Pacific Division, the Roadrunners will play the fourth seed, the San Jose Barracuda in a first round best-of-five series. In the first round of the AHL playoffs, the higher seeded team chooses the format of the series. As the best road team in the Western Conference, the Roadrunners have elected to play the first two games in San Jose and the final three in Tucson. The next three rounds, all the way to the Calder Cup Finals, will follow a standard 2-3-2 best-of-seven format. The Roadrunners’ first-ever playoff game will be played in San Jose on Thursday, April 19th and their first-ever home playoff game will be played on Wednesday, April 25th.

The other Pacific Division matchup will be the second seed, the Texas Stars taking on the third seed, the Ontario Reign. If the Roadrunners make it past San Jose, they will play the winner of that series. In the Central Division (the Western Conference’s other division), it will be the first seed, the Chicago Wolves taking on the fourth seed, the Rockford Ice Hogs and the second seed, the Grand Rapids Griffins playing the third seed, the Manitoba Moose. If Tucson advances past the second round, they will play any one of the four Central Division teams in the Western Conference Final.