In their first-round series of the Calder Cup Playoffs, the Tucson Roadrunners are heading home with their series tied at one. The first-seeded Tucson Roadrunners are playing the fourth-seeded San Jose Barracuda, AHL affiliate of the San Jose Sharks in the first round of the Calder Cup Playoffs. As the top team in the division, Tucson was allowed to select the format of their first round best-of-five series against San Jose, opting for a 2-3 format where the first two games are on the road, and the final three are here in Tucson. 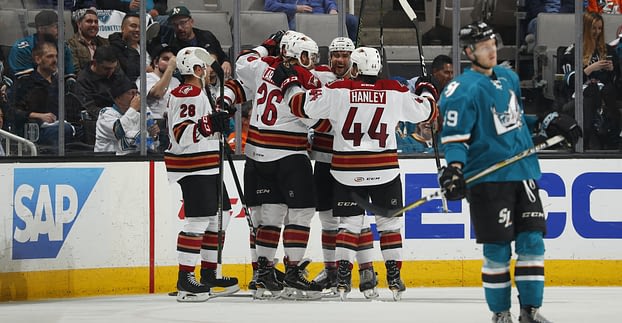 (From left to right) Kyle Capobianco, Zac Larraza and Joel Hanley celebrate a goal in game one.
Source: Tucson Roadrunners

On Thursday, April 19th, the Tucson Roadrunners won their first playoff game in team history 4-2 in San Jose. Tucson never fell behind in the game, carrying a 1-0 lead heading into the second period and a 2-1 lead heading into the third. Scoring the lone goal of the first period, Dakota Mermis scored the first playoff goal in Tucson Roadrunners team-history.

After San Jose’s Alexander True tied the game at one nine minutes and 33 seconds into the second, Tucson’s Ryan MacInnis would restore the Roadrunners’ one-goal lead just 26 seconds later. Trailing 2-1 at the start of the third period, San Jose’s Alexander Chmelevski got the equalizer 5:16 into the final period.

Overall, game one was a lucky win for Tucson, marked by a weak offensive and defensive effort. The Roadrunners registered only 24 shots on goal while conceding 38 to San Jose the other way, including 22 shots against in the second period alone. Had it not been for a stellar performance by Adin Hill, who saved 36 of the 38 shots he faced, the Roadrunners easily could have returned to Tucson in a 0-2 hole.

On Saturday, April 16th, the Roadrunners lost to the Barracuda 6-3, allowing San Jose to tie the series at one game apiece heading back to Tucson. Much like game one, a weak offensive and defensive effort marked the Roadrunners’ performance in game two, but this time goaltending a puck-luck did not save them.

Tucson was outshot 32 to 25, failing to reach the 30-shot mark in consecutive games for the first time this season. After a solid start that saw Tucson jump out to a 2-1 lead 6:16 into the first period off of a pair of goals from Dylan Strome, San Jose scored a pair of unanswered goals to leave the period with a 3-2 lead. Mario Kempe would tie the game at three with the lone goal of the second, only for San Jose to score three unanswered goals in the third, giving the Barracuda a 6-3 win.

After escaping San Jose with a win, the Roadrunners now have time to regroup and close out the series with a pair of wins on home ice. The Roadrunners have had a tough time playing San Jose all season, as the Barracuda are the only team in the entire AHL to have a winning record against Tucson this year, winning the regular season series with a 4-3-1 record (wins-losses-overtime losses).

Winning one of the games in San Jose was crucial as the Roadrunners now need to win only two of the three games in Tucson to advance. They especially need a strong performance this Wednesday, because one of the few weak points for Tucson this year was their inability to win consecutive games on home ice.

Before Tucson got two consecutive home wins against San Diego to close out the regular season, the last time the Roadrunners won consecutive home games was on November 10th and 11th of 2017 against Bakersfield. If they lose to San Jose on Wednesday, allowing the Barracuda to take a 2-1 lead, Tucson will be in a very difficult position, as Tucson will need to win games four and five to advance.

In the grand scheme of things, it doesn’t matter how they won in San Jose; it just matters that Tucson got the win. That being said, there is a lot Tucson can learn from those two games in San Jose, and there are a lot of adjustments that the coaching staff can make.

Their performance in San Jose was uncharacteristically bad for a Roadrunners team that has played exceptionally well this year. All Tucson needs is to go back to playing the type of game earned them the top spot in the Western Conference this year. The Roadrunners are an incredibly talented team; if they can give Hill more defensive support, limit San Jose’s scoring chances, and generate offense like they have all year long, Tucson will easily be able to turn this series around and advance to the second round.