After going up 1-0 at home in the Pacific Division Final, the Tucson Roadrunners lost four straight games to the underdog, the Texas Stars, getting eliminated in five games. With Texas’ victory, they advance and will play the Rockford IceHogs in the AHL’s Western Conference Final. 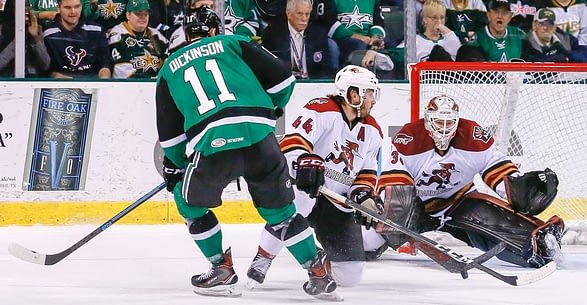 The Roadrunners’ loss in the series was a major upset as they were the top seed in both the Pacific Division and Western Conference heading into the series. At a quick glance, the length of the series looks surprising, but for the most part it was close. Three of the five games went to overtime (games 1, 3, and 5) with Tucson winning game one and losing games three and five.

In the games that ended in regulation, Texas won 4-1 and 2-0 in games two and four respectively. Despite the disappointing second round loss, the future is still bright, and the Roadrunners still had a fantastic season. The Tucson Roadrunners and the Coyotes organization as a whole took a huge step forward in player development and building a winning culture in their minor league system this year.

The difference between Texas and Tucson is that, sure Texas has some great veteran guys that can help them win now at the AHL level, but few of their players are going to help the Dallas Stars win in the future. Texas’ starting goaltender, Mike McKenna for example, who saved 37 of 39 shots to eliminate Tucson last night in game five is 35 years old.

What you have to remember when watching the minors is that its less about winning games and more about player development. Ultimately, Calder Cup titles don’t mean anything if teams are not developing the guys that will help them win at the NHL level in the future.

In that regard, this year was a great success for both the Roadrunners and Coyotes. Tucson was a truly exceptional team in the American Hockey League this year in the sense that the guys that lead the way for the Roadrunners were young players like Dylan Strome, Nick Merkley, Adin Hill, Kyle Capobianco, and Lawson Crouse. Of the guys in that group, Adin Hill is the oldest at 22 years old, Strome is 21, and Merkley, Capobianco, and Crouse are all just 20. Those five players all had great seasons for Tucson, and have great careers in the NHL ahead of them.

The Arizona Coyotes, the Roadrunners’ NHL affiliate have been rebuilding for a long time now as they have not qualified for the Stanley Cup Playoffs since the 2011-12 NHL season. Their lack of success has helped them draft well for the last six years and has filled their minor league system with many great players.

The wealth and depth of talent in the Coyotes prospect pool is what makes covering and watching the Tucson Roadrunners so special. We have already seen players like Brendan Perlini and Christian Fischer develop down here and have success in the NHL. Guys like Strome, Merkley, Capobianco, Hill, and Crouse will certainly follow, and once they make it to the NHL, we will see the likes of Pierre-Oliver Joseph and Tyler Steenbergen develop their game down here.

In short, the Coyotes are a team of the future in the NHL, and it was incredible to see the development of future NHL stars like Dylan Strome this year. The future is bright for hockey in Arizona, and it all starts here in Tucson.