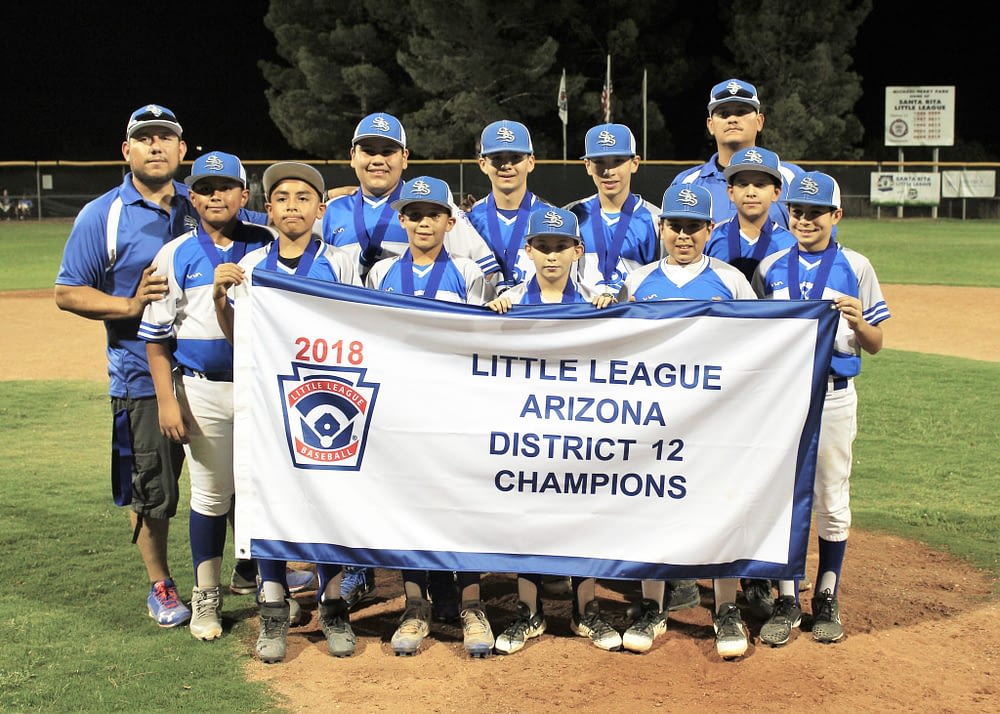 Sunnyside beat Copper Hills 4-1 Monday night to capture the District 12 Little League Baseball title. It took a grand total of 130 games, but all the divisional championships from the Tucson area have now been decided, and that doesn’t include District 8, which covers everything south of Sahuarita and Vail, and District 4, which covers the San Manuel area.

The state tournaments for the teams listed below will begin shortly and the state champions (for the older divisions) will move on to regional play and then the World Series. Most are familiar with the Little League World Series because it is televised and that is where the boys from Sunnyside are hoping to end up.

Sunnyside got everything they needed in the top of the second with a leadoff walk from Diego Pinedo, an RBI single from Jovanni Toledo, an RBI double from Adam Soto, a walk by Francisco Rivero and back-to-back RBIs from Martin Reyes and Angel Iriqui. The four runs would hold up due to the effort put in by Damien Lorta.

Lorta threw a complete game, giving up one run on three hits with nine strikeouts. Lorta was tested in the bottom of the fifth when Jaxon Claiborne hit a pinch-hit double, Alejandro Martinez walked and Luis Pablo Navarro sacrificed Claiborne home but a strikeout ended the threat after Hector Hernandez fouled off a towering shot that would have cut the lead down to one had it been a few feet to the left.

“It was an alright game,” Lorta said. “We work hard everyday and we run. Hard work pays off but we have to work harder at state,” the Summit View sixth grader added.

Hernandez went 2-3 in the game to lead Copper Hills and Owen Kramkowski picked up six strikeouts of his own as he took the mound for the team from Sahuarita. Scotty Underwood took the ball fifth and he finished with five strikeouts in 1 2/3 innings of work.

“I like my team. They are fun to play with,” Kramkowski said. “The best part of the playoffs was beating Rincon again but I wish we could have won this too.”

Copper Hills came out of the elimination bracket last year to beat Rincon twice to win the 9-11 Baseball championship.

The Little League Baseball state tournament will be in Scottsdale starting July 17. Western qualified from District 5.

The 8-10 State Baseball Tournament starts this Thursday at Freedom Park but the teams from Southern Arizona will start on Friday night. The Western Region Junior Softball Tournament gets underway on Friday night with opening ceremonies at the Omni Tucson National. Former Canyon del Oro, USA Junior National Team member, University of Arizona standout and current Pac 12 and ESPN softball analyst Kenzie Fowler is scheduled to give the opening remarks.

Tucson Mountain and Flagstaff will represent Arizona at Western Regionals, to be played at Arthur Pack.