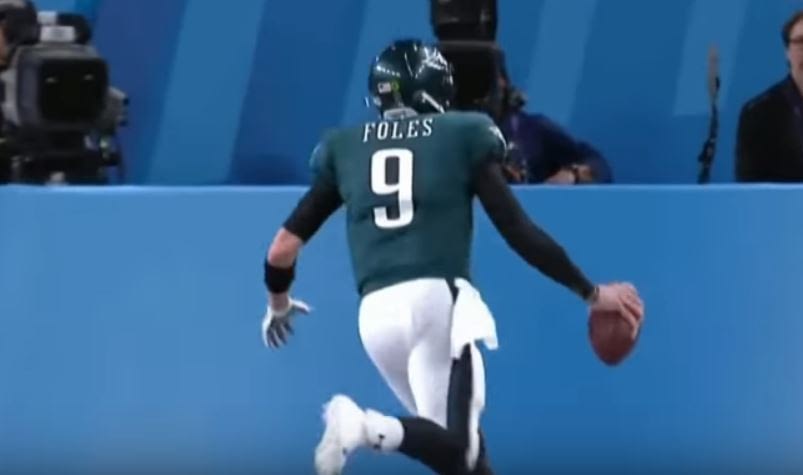 Foles, filling in for injured Philadelphia Eagles starter Carson Wentz through the playoffs, was superb in the 41-33 victory over the New England Patriots in February. He completed 28 of 43 passes for 373 yards, with three touchdowns and one interception, but the game’s highlight was his touchdown reception on a trick play on fourth-and-1 in the final minute before halftime.

So, that got me thinking.

Where does that Foles’ TD catch rank among the greatest moments — not a performance, but a moment — by an ex-Wildcat as a pro?

Here’s my top 5, with video evidence:

Kerr, in an iconic NBA moment, took a pass from a double-teamed Michael Jordan and drilled a 17-foot jumper to break an 86-86 tie in the final seconds of Game 6, giving the Chicago Bulls their fifth title of the Jordan era.

Kerr, in a 2017 story in the Chicago Tribune, recalled the discussion during the timeout before the play.

Even today, watching video replay of the timeout preceding the shot can give chills. Jordan, furiously chomping gum, turns to Kerr.

“He said, ‘Be ready. (John) Stockton is going to double-team me,'” Kerr recalled. “And he was right.”

In the video, Kerr is all calm confidence.

Kerr was. And his career irrevocably changed.

Foles went to the sideline and suggested calling his own number to coach Doug Pederson: Philly Special.

Life says you're just a backup.

On May 31, 1999, Sean Elliott and the San Antonio Spurs were locked in a battle with Portland in Game 2 of the Western Conference finals. Taking an inbounds pass (as former Wildcats teammate Steve Kerr ran the opposite way on the baseline as a decoy), Elliott tight-roped the left sideline, regained his balance and, with his heels above the sideline, launched a shot barely over the fingertips of a charging Rasheed Wallace.

The 3-pointer was good with nine seconds to go.

(You can see in the video below that ex-Cat Damon Stoudamire could scarcely believe what he had just seen.)

It was Elliott’s sixth 3-pointer of the game as the Spurs won 86-85, going on to sweep the Blazers and then knock off the New York Knicks in five games for their first NBA title.

Lofton was one of the great centerfielders of his day, making spectacular catches with the athleticism and leaping ability he showed as an Arizona basketball player for Lute Olson. No montage of MLB great catches is complete without Lofton’s theft of B.J. Surhoff in August 1996.

Apologies to clutch shots hit by Jason Terry and Mike Bibby in the NBA playoffs — and Jim Furyk has a career of masterful highlights — but I’m going a little off the board here to pick Snow’s moment in Game 5 of the 2002 World Series.

Early in the game, Kenny Lofton — yet another example of inter-connected Wildcats in key moments — drilled a triple off the top of the wall that scored Snow from third base. Snow then noticed that Darren Baker, the 3-year-old bat-boy son of San Francisco manager Dusty Baker, had accidentally wandered onto the field and was near home plate to retrieve Lofton’s bat while the play was ongoing.

Snow plucked Darren away from home plate as David Bell came racing in to score in front of catcher Benjie Molina, saving the youngster from what could have been a nasty collision.

As MLB.com wrote earlier this year: “That scene from the 2002 World Series is easily the most unforgettable moment in bat-boy history; we never saw anything like it beforehand and we haven’t seen anything like it since.”