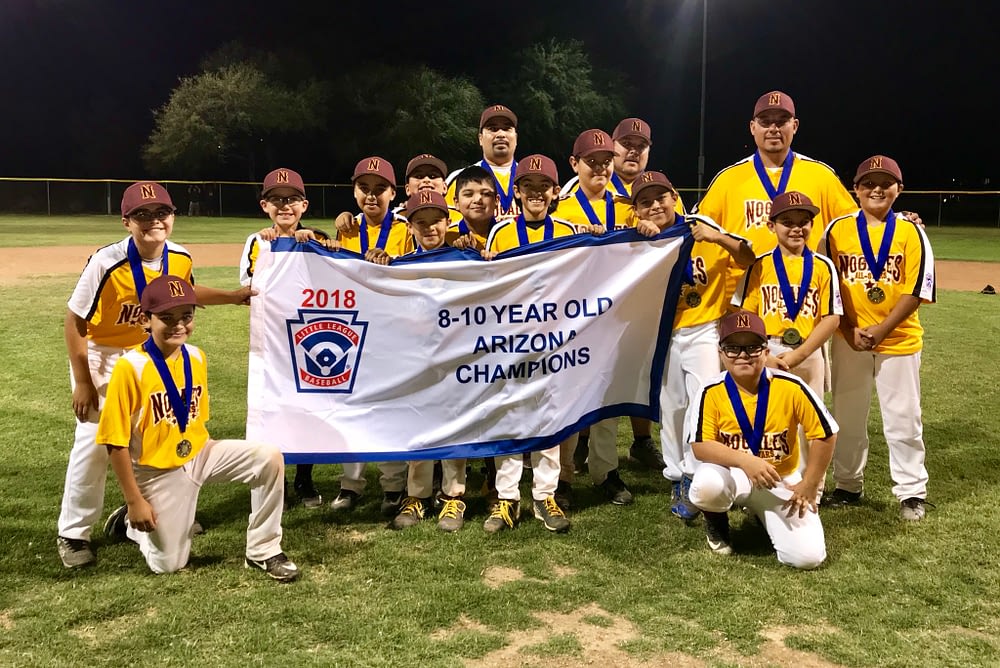 Red Mountain (5-2) lost to Nogales in the final of the winner’s bracket last Saturday but the team from Mesa battled back and beat Gilbert National Monday night to set up a rematch with Nogales (5-1) Tuesday night where Red Mountain run-ruled Nogales 11-1 in four innings to force the “if game.”

Nogales took a 2-0 lead in the top of the first thanks to a 2-RBI home run from Ruben Celaya but Red Mountain tied things up in the bottom of the second on an RBI single from Trey Johnson and an infield error on the play to plate Wyatt Bundy, who reached earlier in the inning on a hit by pitch.

Nogales scored three unearned runs in the top of the third after an infield miscue that extended inning with one runner on with two outs. J.P. Tapia followed with an RBI single and Esteban Vazquez followed that up with a 2-run double.

Red Mountain cut the lead down 5-3 thanks to a single from Easton Leon and a pinch-hit RBI triple from Landon Englebrecht but Nogales got the run back in the top of the fourth after E.J. Mayer singled and scored on an error. Red Mountain threatened to take the game over in the bottom half of the fourth thanks to a single from Tate Clarkson, a double from Noah Watts and an RBI single from Johnson but the inning stalled with Mayer inducing two groundouts to end the threat after coming in to replace Ivan Molina.

Molina threw 3 1-3 innings, giving up three earned runs while picking up five strikeouts. Leon took the ball for Red Mountain and he gave way to Watts in the fourth and Grady Inglish finished the game.

Nogales scored on a bases-loaded walk by Rodrigo Olivares in the top of the fifth to make it 7-5 but Red Mountain made things interesting in the bottom of the seventh. Mayer erased seven batters in a row, including the first two batters in the bottom of the seventh, but back-to-back walks from Bundy and Johnson put the winning run at the plate. Micah Murray followed with a hard shot but Nogales ended the final threat with a throw to first to preserve the 7-5 win.

Watts threw 1 2-3 innings of middle relief and he went 1-for-1 at the plate with a double and a run scored but the 10-year-old had obvious mixed emotions after the loss.

“Our team is really good and we played hard to get this second chance,” Watts said. “We felt we were going to win but we had a lot of fun this week.”

There are no regional tournaments for this age group so Nogales will end their summer with a state championship but things got a bit nervous after Red Mountain run-ruled the team Tuesday night according to Celaya.

“We fool around a lot and try to have fun but we were nervous after last night,” Celaya said. “But we had less errors in this game and we batted better.”

Celaya went 3-4 with a double and an RBI to help lead Nogales and Johnson went 2-2 with a walk and two RBI for Red Mountain.

Anthony Montez threw a no-hitter and Rincon run-ruled Queen Creek 15-0 in three innings to win the championship of the 9-11 Baseball Tournament taking place in Mesa.

Rincon Little League 9-11 Arizona State Champs! Back to Back for this group of young men. pic.twitter.com/xF11Z4zfhZ

The team from Vail lost to Queen Creek Tuesday night to force another game. The loss was the first loss for the Rincon All-Stars after the team went 9-0 to win the 8-10 state championship last year and 9-1 to win state this year. Unfortunately, there are no regional tournaments for this age group but Rincon will be favorites at the Little League level if head coach Tommy Riesgo can keep the team together.

Nogales is headed to San Jose after winning the state Junior Baseball Tournament in Tempe. The West Region is slated to start on Saturday, July 28 and Nogales will take on Oregon on Sunday morning.