We have reached 35 days — or five Saturdays from today — until tailgate season and when the Arizona Wildcats kick off their 2018 campaign under new coach Kevin Sumlin. The season begins when Arizona hosts BYU on Sept. 1 at Arizona Stadium.

We started the debate when it was 50 days to kickoff. All of the reader polls can be accessed here (you still have time to vote):

What they said about 1998 team

Iowa coach Hayden Fry after losing 35-11 to Arizona in Tucson in the third week of the season:

“Believe it or not, we made a lot of progress. Arizona has a tremendous football team. We knew coming in they had a lot of speed and they showed it.”

“It was evident they had veteran quarterbacks (Keith Smith and Ortege Jenkins) and the veteran wide receivers (Dennis Northcutt and Jeremy McDaniel). Their offensive line ran every stunt imaginable. They had tremendous speed and quickness.”

Northcutt had five receptions for 157 yards and McDaniel had five for 108 yards.

Smith on Jenkins’ famed “Leap by the Lake” touchdown in which he went head-over-heels into the end zone for the win at Washington on Oct. 3, 1998:

“That right there is the college play of the year … I’m in awe. I could not believe what I was seeing. I could not believe how high in the air he was. I’m amazed he held on to the ball. When you flip, your instinct is to put your hands out. What he did, that’s just not normal.”

“It was like a video game or something like that. He wanted to win for us and I appreciate what he did. He gave up his body for the cause.”

Arizona coach Dick Tomey about the Wildcats not made of high school All-Americans like at USC and UCLA:

“Teams are about a guy named Joe.”

Arizona defensive coordinator Rich Ellerson, the architect of the Desert Swarm defense in 1993, to The Arizona Daily Star about the makeup of the no-name defense of 1998:

“Hercules don’t play here. I think our guys are realistic enough to know that we are finding a way to win in every phase of the game, but we aren’t all-world out there. But, obviously, this group has belief — great belief — that they can get the job done.”

“They shut us down the whole game and that hasn’t been done for a while. They’ve just got a bunch of guys who fly around. They’re not necessarily the biggest guys, but they fly to the ball and they get the job done. They were stringing us out outside, then we tried to go inside and they were doing a lot of plays to fill the holes. That made it real tough on us.”

Oregon, behind mobile quarterback Akili Smith, averaged 230 yards rushing entering the game but mustered only 64 net yards on the ground against Marcus Bell, Joe Tafoya, and Co. The Ducks also averaged 44 points a game before the beat down.

“He basically takes away one-half of the football field.”

“At the line of scrimmage they wore us down and just plain beat us.”

ESPN analyst Lee Corso on the prospect of Arizona still in contention for the Rose Bowl late in the season before facing ASU:

“They absolutely deserve to go to the Rose Bowl. They had UCLA beat in the middle of the the third quarter (before suffering their only loss of the season, 52-28 to the Bruins) and then they got a little too lax. Dick Tomey has done a wonderful job at Arizona. If they beat ASU — and anybody with brains would pick Arizona — they deserve to go to the Rose Bowl, not Notre Dame or Florida State or anybody.”

The point became moot when UCLA lost at Miami to end the regular season, eliminating the Bruins from the chance at playing for the national championship. They took the Rose Bowl slot as the Pac-10 champs.

Nebraska coaching legend Tom Osborne before the Cornhuskers faced Arizona in the Holiday Bowl against Osborne’s replacement, Frank Solich, in his first year as the head coach:

“I don’t know much about Arizona other than the fact they have a good coach in Dick Tomey and some of the best skill-position players in the country.”

Arizona receiver Brad Brennan, a former walk-on, talked about what Tomey told the team before playing Nebraska, particularly what the “N” stood for on the Cornhuskers’ helmets:

“He said it stood for ‘Not Today.’ They were not going to win just because of their reputation.”

Arizona beat Nebraska 23-20, limiting the Cornhuskers to only 87 rushing yards. They came into the game averaging 253.8 yards a game on the ground, ranking No. 6 in the country. Brennan caught a 63-yard pass in the first quarter and a 15-yard touchdown pass from Keith Smith in the fourth quarter.

Solich with his impression of Arizona’s 12-1 team, the No. 4-ranked team in the nation with the most wins in a season in school history:

“They’re certainly deserving to be a top-rated team. There’s no doubt about that. Arizona has as many big-play people on offense that we have faced. They have a shot if they get as many snaps as they did to hurt us.”

— The best to wear No. 35 for Arizona is a Wildcat legend — the “Jackrabbit”, Joe Hernandez, a back who was part of arguably another Wildcat team that could be the greatest, the 1961 team that finished 8-1-1. He scored 12 touchdowns, seven via the pass in the 1960 from quarterback Eddie Wilson. Arizona had a 10-0-1 stretch between the 1960 and 1961 seasons with Wilson, Hernandez and fellow prolific back Bobby Thompson. Thompson and Hernandez, a member of the Arizona Sports Hall of Fame, were nicknamed the “Touchdown Twins” after combining for 19 touchdowns in 1960. 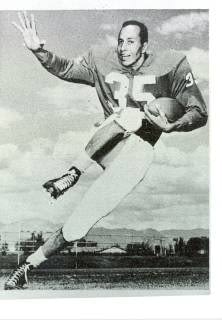 Hernandez, 78, is retired after running his own insurance company in Tucson for many years.

Another No. 35 worth mentioning is Mario Hampton, a fullback during the early Tomey years who rushed for almost 1,000 yards in his career. That kind of production at that position would be unheard of today.