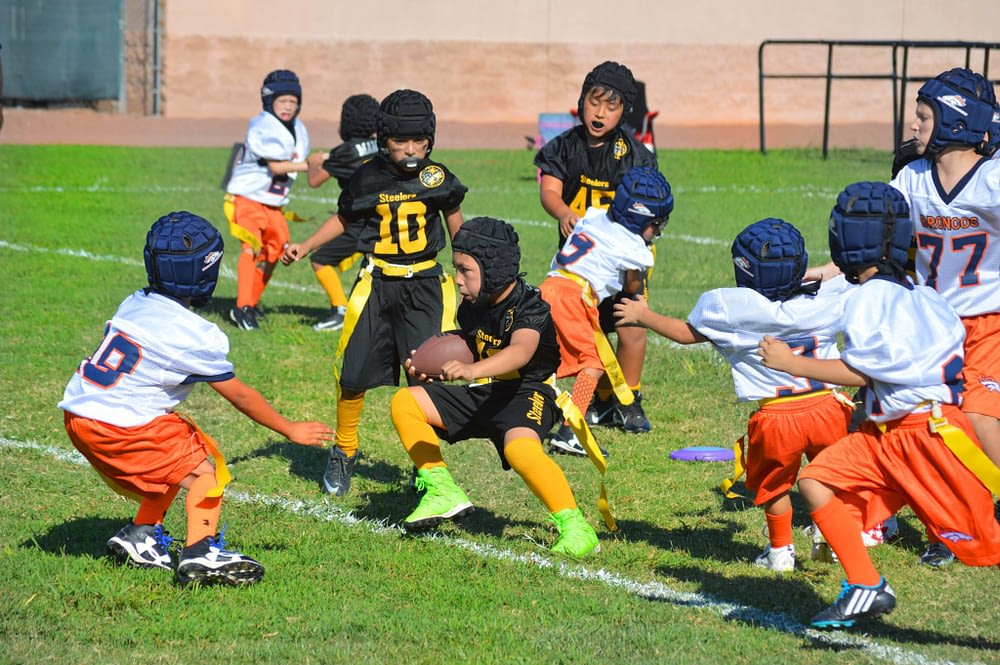 Jaxson Samorano is surrounded but he somehow broke free for a 55-yard TD. (Andy Morales/AllSportsTucson.com)

This is where it all starts. A bit removed from the tackling, the competition is still there. The huddles, the plays, the passes, the running and the cheering. Lost in some of the competition, is the fact that the players (and the coaches) in the 8U Flag Division of the Tucson Youth Football and Spirit Federation (TYFSF) are still learning. Mistakes happen at all levels, up through the NFL, but mistakes at this level are expected because mistakes are part of the learning process. Still, we cheer, and for good reason. What’s not to like?

Emmanuel “Junior” Hernandez started the scoring off with a run through a field of arms and hands reaching for his flags until he found daylight some 55 yards down the field to put the Marana Broncos up 6-0. At this level, a pass after a touchdown is worth two points and Hernandez did just that, a nice play to Dominic Alvarez, to make it 8-0.

Ryan Young recorded a safety for the Broncos to make it 10-0 but Jaxson Samorano pulled the Tucson Steelers to within 10-6 on a 55-yard blast of his own moments later.

There is always a winner on the scoreboard but the true winning comes it the experience of being on a field in real competition and no one grows more than the coaches and parents on the sidelines. In time, the coaches will be wearing headsets and the parents will be far removed, sitting in the bleachers. Hopefully, they will remember that a simple juice box was the cure for all that went “wrong” and a hug is the cure for everything.