Before the sun rises daily, guards Kam’Ren Rhodes and Kamryn Doty are in the gym at Sabino High School working on basketball drills. Their new teammate, but longtime friend on and off the court, 6-foot wing player Kiya Dorroh spends countless hours working with her father on her shooting.

The work when it is not expected sets these players apart in the growing landscape of girls basketball talent in Tucson.

“They know what it takes to get there,” said Sabino coach Jaamal Rhodes, Kam’Ren’s father who was once the video coordinator for the Arizona women’s program under former coach Niya Butts.

Division I coaches are gravitating to Sabino’s campus — which has a positive residual effect on the development and discovery of more talent — because of the time players such as Rhodes, Doty and Dorroh have put in to improve their skills to a higher level.

Arizona coach Adia Barnes and her staff showed up last night at Sabino for Dorroh’s first game since becoming eligible following her transfer from Tanque Verde before the school year. They sat on the first row by the gym floor during Sabino’s 70-45 win over Safford, which has a talent of its own.

The image of Barnes and Holthaus — Tucson’s women’s basketball coaches at the college level — at a local gym enhances the image of what Tucson basketball for girls has become.

“You saw it tonight, the people who are coming here,” said the elder Rhodes, who is aided at Sabino by prominent club-team coach Jeremy Daniels (of AZ Supreme) and former Arizona standout Davellyn Whyte. “And then over the summer, we had Kentucky here. We had Long Beach State here. We had Oregon State here. Kamryn Doty’s getting calls from Tennessee Tech, from George Washington.

“While it’s a benefit for Sabino, it’s a benefit for Southern Arizona. I’ve been here for nine years. I moved out here (from Georgia) and worked for nine years with Niya at the University of Arizona, and during that time, there was not that many kids from Tucson who you’re recruiting … right now the talent is as fruitful as it’s been since I’ve been here. I think it’s great for Southern Arizona.

“The fact that I have three of them, I don’t have complaints about it.”

Sabino, a favorite to win the Class 3A state title, has won 12 of its last 14 games and improved to 13-6 overall and 3-0 in the 3A South with its victory over Safford last night.

Dorroh’s first game of this season netted her 14 points off the bench but she admitted that she was “rusty” and could have scored more because of missed short-range shots. Jaamal Rhodes said he did not start Dorroh because “we hadn’t lost and I didn’t want her to press to feel like she had to do something to save the world.”

“She’s going to have to get used to running up and down the court in a game setting,” he said, “but also the chemistry between the kids will be very key.”

Dorroh, who has 13 scholarship offers, most from Division I programs across the country, said her initial appearance with Sabino “was definitely nerve-wracking at first, my heart was pumping a lot but once I got to warmups it went away.”

The transition to the court for Dorroh was made smoother playing with Kam’Ren Rhodes and Doty, two 5’6″ point guards are fearless with their penetrations to the basket and confident with their perimeter shots.

Doty finished with a game-high 27 points, with three 3-pointers, and Rhodes had 11. 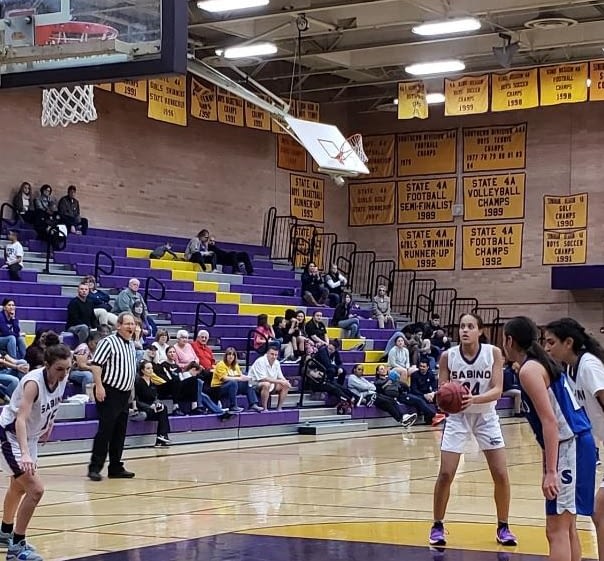 Rhodes, a freshman, said the addition of Dorroh is a “good fit.”

.@Sabino_HS standout Kiya Dorroh goes in for two of her eight points as the Sabercats lead Safford 49-30 heading into the fourth quarter. pic.twitter.com/cAgSAd8YvN

“She helps. She has length. It helps the team, it provides,” she said. “It’s amazing (playing with Dorroh and Doty). I’ve played with Kamryn Doty for five years now and Kiya another piece to the puzzle. I love Kiya. It’s just amazing. Great players.”

Doty said the first game with Dorroh “could have been better” only because Dorroh showed her rust and nerves early. They have known each other on and off the court starting with their club-ball experience the last few years.

“Of course, she had her jitters,” Doty said. “It’s our first game. She’s been so eager to play. We were excited for her. … She did pretty good. I’m proud of her and I’m proud of us, too. I just think we’re going to get better over time.”