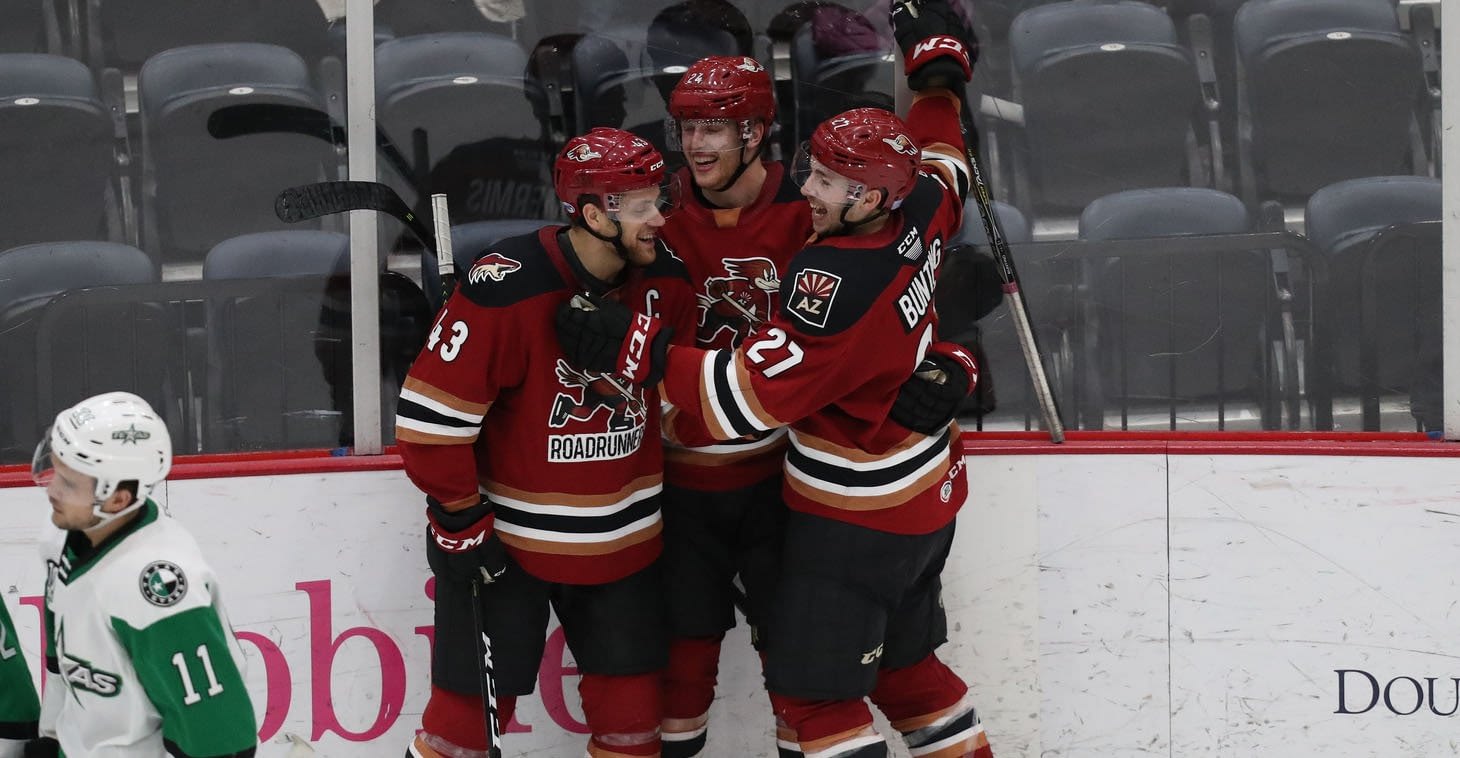 Monday afternoon, the Tucson Roadrunners beat the defending western conference champions, the Texas Stars, 6-3 at Tucson Arena. The win came after a 2-0 road win over the Colorado Eagles on Saturday night. Monday was also the first game of the season between the former Pacific Division rivals, with the Stars who are now in the Central Division, eliminating the Roadrunners in the second round of the Calder Cup Playoffs last season. Hunter Miska got his 20th start of the year and was opposed by Landon Bow between the pipes for the Stars.

Texas’ Gavin Bayreuther opened the scoring Monday night. Miska was able to make the initial save, but with Bayreuther crashing hard to the net, he buried his own rebound, giving his team a 1-0 lead. The first period was not the best for the Roadrunners offensively, with the Roadrunners registering only five shots on goal to Texas’ 10. Tucson’s best scoring chance of the period came on the powerplay when Nick Merkley was all alone in the low left faceoff circle, but couldn’t get good enough of a grip on the puck and to get the shot away.

Down by one heading into the second period, it took Tucson’s Kyle Capobianco only 2:53 to tie the game, firing a one-timer past Landon Bow off of Nick Merkley’s pass. The game was tied at one until Texas’ Denis Gurianov restored his team’s lead, scoring on a Texas 2-on-1 rush. Michael Bunting, just weeks removed from an NHL stint with the Coyotes, tied the game at two 11 minutes into the second, only for the Stars’ Michael Mersch to give his team a 3-2 lead less than three minutes later.

Back and forth action would continue for the remainder of the second period, with Lane Pederson tying the game at three on a delayed penalty call. After being slightly outplayed in the opening forty minutes of the game, the Roadrunners played their best period of the night in the third, outscoring the Stars 3-0 and out shooting them 9-7.

Hudson Fasching gave his team the go-ahead goal, with his tenth of the season, scoring on a Tucson 2-on-1 odd man rush less than two minutes into the third. Kyle Capobianco would widen Tucson’s lead just past the game’s 50-minute mark, with his second goal of the game. Down by two, Texas pulled the goalie with 2:38 left in the game, giving David Ulstrom the opportunity score an empty net goal, leaving the final score at 6-3 Tucson.

The Roadrunners thoroughly outplayed Texas in the third, with Tucson holding the Stars shotless for a roughly five minute-long stretch in the period. When asked about what allowed his team to explode offensively in the period, Tucson right wing, Nick Merkley said: “I think we just outskated them, I think our leaders really stepped up, and it’s just nice that we came out on top.”

Up next is another home game against the Stars this Wednesday at 7:05 PM.