Junior college basketball point guards who score more than 1,000 points in their careers yet are responsible for making plays and getting the most out of their teammates?

It can be done.

Pima College’s Jacqulynn Nakai and Abram Carrasco, sophomore leaders respectively for the women’s and men’s teams, are examples of point guards who make their points without always scoring. 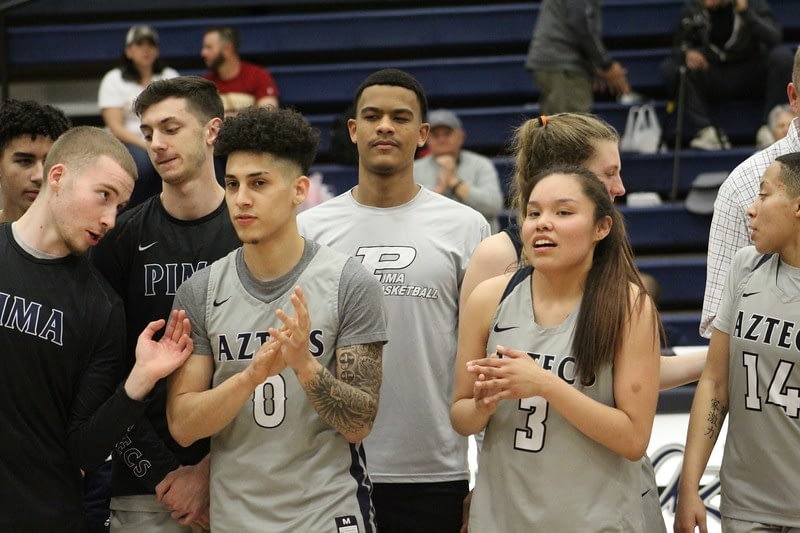 CLICK ON THIS FOR MORE PHOTOS BY ANDY MORALES

And when they do score, they score like few others.

Tonight, in wins over Arizona Western College, each had stat lines that are indicative of their balance with scoring, rebounding and dishing out assists.

Nakai, who hails from Flagstaff Coconino High School, had 20 points with eight assists and seven rebounds in the Aztecs’ 88-68 win over Arizona Western, giving them their seventh win in the last eight games to improve to 13-9 overall and 9-5 in the ACCAC.

Carrasco, formerly of Cholla High School, finished with 25 points, nine rebounds and six assists in Pima’s 100-95 win over Arizona Western. The Aztecs are now 17-5 and 10-4.

They took part in a ceremony between games at midcourt that honored their 1,000-point achievement.

Carrasco now stands at 1,036 points with 275 assists in his career. Nakai is at 1,039 points with 363 assists. Each of their teams have eight regular season games remaining.

Pima men’s coach Brian Peabody said that although Carrasco has reached the 1,000-point plateau and is one of the top junior college players in the state, his demeanor outside of basketball is most impressive.

“With Abram, the biggest thing is just his maturity off the court He’s just a totally different person,” Peabody said of Carrasco since his days at Cholla. “He’s really good in the classroom. He was a grade away from being an Academic All-American last year. He’s going to graduate with a degree move on to a four-year school and get a degree.

“We’re all thrilled to death. I think everybody counted him out, didn’t think it was possible for him to do that and he’s proving a lot of people wrong.”

Nakai is equally talented in the classroom, contemplating her next playing stop at a four-year school that will offer the best courses in kinesiology. A few Division I programs have offered scholarships, including Nevada, NAU and Pacific.

Playing at that level did not cross Nakai’s mind coming out of Flagstaff two years ago.

.@PimaAthletics point guard @JacqulynnNakai discusses how she helps the Aztecs much more than scoring. She has led Pima to seven wins in its last eight games. pic.twitter.com/Pkqc5pl8E5

“Honestly, going into my first year, I didn’t think too much of it. I was thinking maybe I’ll be D II or something like that,” she said. “I just worked hard and kept doing my thing. It’s working in my favor.”

Pima women’s coach Todd Holthaus mentioned that in his 20 years of coaching Nakai is “the hardest working kid I’ve ever coached, hands down.”

“She’s in the gym all time. … I don’t throw compliments out like that as well.”