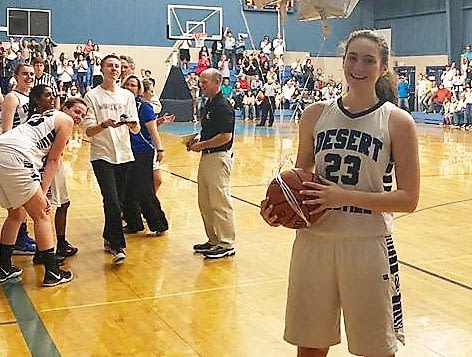 As we wind down the regular season and head into February Frenzy, there are still a few players out there reaching important scoring milestones including Desert Christian senior Emma Blunk. Blunk came into her senior season with only 525 points to her name, in two years of work, and it was uncertain if she would be able to almost double that number to reach 1,000 in her last year but she reached that goal on the final day of the regular season by scoring 17 points to lead the Eagles past Valley Union 59-27.

One of my favorite players, Desert Christian senior Emma Blunk, with a rebound from the top of the key and put back to break 1,000 career points. Sorry i was at wrestling sectionals and missed this @DCSAZ thanks Lori Tucker for saving the day with this video!!! pic.twitter.com/MZZyCc7vB5

Blunk has 1,005 career points and, more importantly, her team is now 18-8 (12-4 in power-ranking games) on the year and ranked No. 12 in the 2A Conference. The Eagles also claimed the second automatic playoff berth from the 2A South Region thanks to a better conference record than Globe. The Eagles are on an eight game win streak and this is the highest the team has been ranked since 2016 when the team went into the playoffs ranked No. 9.

Douglas senior Ximena Iniguez is now at 1,007 career points after scoring eight points Tuesday in Douglas’ win over visiting Palo Verde. Iniguez was given a hoodie with her accomplishment. She is also very successful in the classroom, earning an academic scholarship to ASU.

University of Arizona commit Nico Mannion has 1,928 career points at Pinnacle (22-3). The reclassified senior might break 2,000 career points but it will be close. Had Mannion decided to play next year, there is little doubt he would have been the fourth player in Arizona history to break 3,000 career points.

Mannion’s total was boosted by 57 points against Chaparral in a 91-88 victory with Mannion hitting a game-winner at the buzzer.

The Pioneers are the top-ranked team in the 6A Conference and the Pioneers will travel to No. 28 Boulder Creek (8-16) on Tuesday to end the regular season. The 6A First Round is scheduled for Feb. 14.

Salpointe junior Evan Nelson has 925 career point and Pusch Ridge senior Jared Clark has 903. Both standouts need a few playoff games to break 1,000, although Nelson still has another year left.

Cienega (7-2) can win the 5A Southern Region outright with a win over Ironwood Ridge (5-4) on Tuesday. Nogales (6-3) needs to beat Marana (4-5) and hope for a Cienega loss to claim a piece of the region title.

Cholla (9-0) has already claimed the 5A Sonoran title.

Amphitheater (8-1) can claim the 4A Gila Region outright with a win over Walden Grove (4-5) on Tuesday. Palo Verde (7-2) needs to beat Douglas (2-7) and hope for a Panther loss for a share of the title.

The Gregory School claimed the 1A South Region at 9-0 but the region also has a section tournament scheduled for Wednesday.

Rincon/University (7-2) is in control of the 5A Sonoran with a big game at Cholla (6-3) scheduled for Tuesday night. Cholla needs to win to force a share of the title.

Sahuaro (8-1) and Salpointe (8-1) are battling it out in the 4A Kino Region but Sahuaro still has a date at Catalina Foothills (5-4) and Salpointe host Vista Grande (0-9).

Baboquivari (10-0) claimed the 1A South with the section tournament coming up on Wednesday at ASDB.