Thirty-six years after UCLA All-American place-kicker John Lee missed wide right on a 37-yard field goal attempt — failing to tie the game on the last play against Arizona at Arizona Stadium in a nationally-televised game — the Bruins’ J.J. Molson missed a game-tying 39-yard field goal with 34 seconds left in about same spot last night on an ESPN broadcast.

Molson’s miss last night came after Arizona coach Kevin Sumlin pulled a fast one — a timeout that is — right before Molson’s initial attempt that went through the uprights. After the timeout, Molson lined up again and missed wide right. Somewhere, Lee, now 55, was probably grimacing. 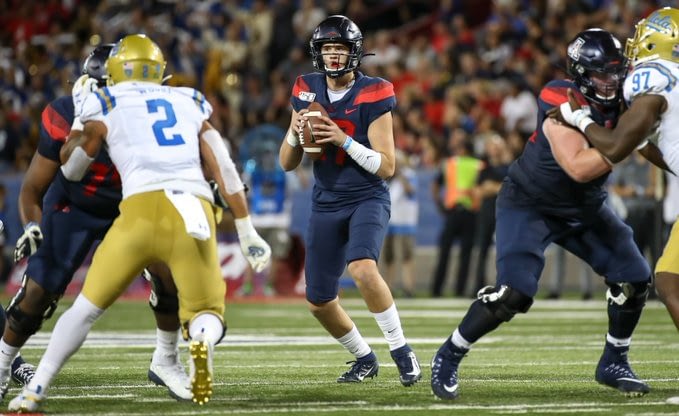 Share Tweet Arizona freshman Grant Gunnell threw for 352 yards and a touchdown in his first career start in college, playing in place of injured Khalil Tate, in Arizona’s dramatic 20-17 win over UCLA on Saturday night at Arizona Stadium. Gunnell looked as cool and collected as he was at St. Pius X H…

“You’ve got them in your pocket,” Sumlin said of the timeout. “I can’t take them home and bring them to the next game. But probably the biggest decision was not to use the last timeout on that next kick. That’s all luck of the draw.

“I’ve also had times where I’ve called it and the guy missed it and made the next one. It’s just the opposite comment from you guys (the media) and the fans: ‘What are you doing?'”

A little background of the significant game in 1983 involving UCLA and Lee and Arizona:

The Wildcats started that season 4-0 and ranked No. 3 in the nation with the likes of Ricky Hunley and Tom Tunnicliffe playing for Larry Smith. The Wildcats, derailed in Week Five by a 33-33 tie at Cal, in which the Golden Bears rallied from a 26-3 deficit in the second half, lost three consecutive games before they played the Bruins.

Arizona fans became restless with Smith, although the Wildcats lost those three straight games by a total of only 19 points to Oregon, Stanford and No. 20 Washington. A crowd of only 42,640 showed up for the 10:30 a.m. kickoff, scheduled that early to accommodate the national television broadcast on CBS.

Arizona wide receiver Jay Dobyns caught an 8-yard pass from Tunnicliffe for the decisive touchdown with 61 seconds left. Arizona’s 69-yard drive culminating on Tunnicliffe’s touchdown pass to Dobyns in the back of the end zone was one of the best drives engineered by a Wildcat quarterback in a pressure situation.

Tunnicliffe completed all four of his passes in the drive that started with 3:28 remaining. Among them, he connected with running back Chris Brewer for 11 yards on a third-and-7 situation and receiver Jon Horton for 12 yards on a third-and-2 play. He then completed a 32-yard reception to receiver Brad Anderson to the UCLA 3. After an offsides penalty that moved the ball back to the 8, Tunnicliffe connected with Dobyns for the go-ahead touchdown.

Schooler, a junior, had two tackles for loss, giving him 39 in only 29 games in his career. With 1.5 more, he’ll reach the Arizona top 10 and tie Chris Singleton.

He is four shy of tying Marcus Bell for the most by a linebacker in school history. Bell had 43 from 1996-99.

“I love the way we played tonight,” Schooler said last night. “All phases of the game, we had guys stepping up, switching positions, doing everything right and just executing the game plan.”

Arizona continues to lead the nation in interceptions after cornerback Lorenzo Burns recorded his third of the season last night, giving the Wildcats nine.

Burns and Jace Whittaker are tied for the national lead with 11 other players with their three interceptions each.

Whittaker also had a pass broken up giving him 32 in his career, tying him at fourth in school history with Devin Ross and Antoine Cason. The Wildcats recorded seven passes broken up against the Bruins.