Larry McKee walked slowly in my direction the other day toward the end of Sahuaro’s practice after I sat on the Cougars’ bench. One of the players told him that I might be a spy for Salpointe, which plays at Sahuaro tonight at 7 in a battle of unbeaten Class 4A Kino teams.

“Can you go check him out?”

“Sure, I’ll go talk to him,” said McKee, who has been around the sport of football for more than 50 years and knows all of its nuances, including perhaps some underhanded tactics by coaches.

I noticed McKee approaching with a slight limp from his back problems brought on by his years of playing high school football in Pittsburgh and at Arizona in the late 1960’s. The wear-and-tear has slowed him down but has not stopped him from assisting his son — Sahuaro coach Scott McKee — coaching the Cougars from time to time.

Larry McKee, 69, is a high school dignitary in Tucson, who coached at Pueblo and Sabino and had his battles with legendary coaches Howard Breinig at Sahuaro, Paul Petty at Sunnyside and Vern Friedli at Amphi. He started his coaching career as an assistant at Cholla under Ed Brown, the first black head coach hired in Southern Arizona who went on to become a Pima County Sports Hall of Famer and Arizona Sports Hall of Famer. McKee later was a longtime principal at Tucson, Catalina and Sahuarita high schools.

Name a situation, he’s experienced it. Told that I’m a spy likely made him chuckle.

As he came a few steps from me, I stood to greet him. He reached out his hand and welcomed me not with a “What are you doing here?” but a, “Hello, how are you doing?”

I introduced myself and mentioned I am with AllSportsTucson.com, and he responded, “Oh, yeah. Great to see you. Here, let’s have a seat.” It was like he pulled up a stool at the bar and sat with me. I am glad I got there when I did before he departed.

After we sat on the bench, he told one story after another about his coaching background, starting at Pueblo and shifting to Sabino, before embarking on a long, successful career as a school administrator.

He talked about Scott celebrating his 41st birthday Sunday and the memories that come with that experience after taking his late wife Terri Lyn to the hospital to give birth and leaving to Pueblo’s game at Sunnyside just in time, getting there about 20 minutes before kickoff.

“His birth coincidentally was during the only teachers strike in TUSD history,” Larry said. “My dad was a Teamster. I was told by the union whatever you guys do, don’t cross that picket line and go to work.

“It was tough. Paul Petty’s team at Sunnyside was 3-1. We were 3-1. I didn’t run practice all week because I stayed behind the picket lines. The auto mechanic guy at Pueblo was there picketing and so was the metal shop guy. Well, one fixed my car all the time. The other one built the weight room for me with all the weights and stuff because we couldn’t afford to buy it. I couldn’t cross that picket line.”

Being the competitor that he is, raised by a blue-collar dad himself who was a sanitation worker at Pittsburgh, Larry McKee could not restrain himself from trying to coach that night.

“Pueblo’s principal met me at the gate and said, ‘Where are you going?’ I said, ‘I am going to game.’ He told me, ‘You’re not coaching these young men after being gone all week,'” the elder McKee recalled.

“So, I walked back to my old car. I couldn’t afford a new one. I stood on the hood trying to coach the team through a chain-link fence. A couple of coaches went to practice that week and they ran the team. A kid I had a few years before at Cholla was a police officer for TPD. He was there working the game. He said, ‘Coach, take my radio.’ He gave me his radio and another to one of our coaches on the field. I still managed to coach that game the best that I could.”

Pueblo lost the game 41-12. The Warriors also lost three players to injury with each taken to a local hospital that night. McKee visited each.

“The last one I visited was at TMC, because that’s where I needed to go to see my wife and baby. I got there around 2:30 in the morning. I walked into my wife’s room, and she said, ‘I’m glad you can make it back.'” he said. “I told her, ‘AlI can do is apologize. You are safe. You’d already given birth. … I love you.'”

Scott McKee’s head coaching path is similar to that of his father.

They both started their careers at Pueblo after playing collegiately at Arizona.

Larry left for Sabino after the 1980 season when TUSD offered the job to Saturnino “Curly” Santa Cruz after Santa Cruz filed a discrimination suit against the school district for not hiring him as the head coach in 1977. McKee and Santa Cruz carry a mutual respect for each other to this day. Santa Cruz was more upset about TUSD not giving him a chance for an interview.

“Mr. Santa Cruz was done wrong in the fact that TUSD did not have a definitive hiring process,” said McKee, who brought up the topic to me unprovoked.

Scott McKee coached at Pueblo from 2004 to 2008 before pursuing the head coaching position at Sahuaro in 2009. He has become one of Southern Arizona’s top head coaches with a 67-48 record in his 11th season with the Cougars.

“He’s great with kids. He’s very thorough, very detailed, very much organized,” Larry McKee said of his son. “Those are the things that I see that I had.” 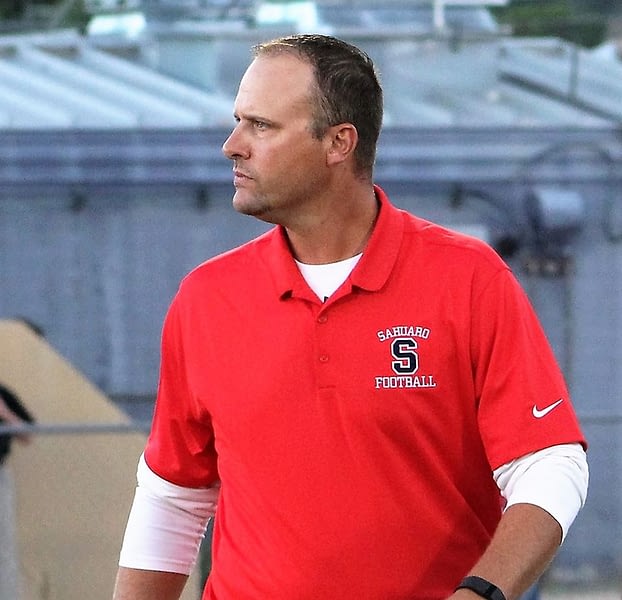 Share Tweet The interview was done, the recorder was turned off, and a walk followed with Scott McKee to the parking lot at Sahuaro High School. “I don’t ever want it to be just about me,” McKee told me about this story. It has never been just about McKee, and that is what makes the […]

He pulled out a bag of beef jerky that he often makes for Scott and the players and offered me some.

“I tell Scott remember some of the basic things, like the ‘KISS principle’ — Keep It Simple Stupid,” he said. “Sometimes you feel like you have to outcoach somebody. Salpointe’s got so much talent. They’re just going to go out and play ball because they’re going to beat you on talent.

“You may need a couple of little wrinkles against a team like that but don’t rely on them.”

Scott McKee persevered after a stellar career as a linebacker at Sabino to earn a scholarship at Arizona after being a walk-on when Dick Tomey was coach in 1999. Larry, an offensive lineman, came to Arizona as if by fate in 1968 when Darrell Mudra’s assistant Bill Belknap, who is from Pittsburgh, happened to be there visiting his mom when Larry played in a high school all-star game.

“All of a sudden, he came by the school, talked to the coach and he came over … he went home with me,” said McKee, who is celebrating his 50th anniversary earning his first letter at Arizona. “He told my parents, ‘We want to fly him to Arizona and we’re offering him a scholarship.’ It was my only offer.”

When he visited Arizona for the first time in February 1968, he asked to be excused from a meeting with the coaches and walked outside on his own and saw an orange tree in the sunshine — a sight not seen at Pittsburgh.

“I had never been farther west than Ohio. … I thought this was the most beautiful country I had ever seen,” McKee said. “I decided I would come to Arizona.”

Scott McKee calls it a “blessing” that Belknap noticed something in his dad that other colleges did not. His father went on to be drafted by the Cleveland Browns in the ninth round in 1972 but was unable to make the team out of training camp.

The elder McKee returned to Tucson and embarked on his coaching career with Brown at Cholla.

“If he did not get noticed by Arizona, he would have been running the garbage company for my grandfather,” Scott said. “That was the deal. My grandfather grew up on the back of a garbage truck. He was the guy who threw the cans. There was not a machine back then.

“My dad might have been a really good garbage man. But he got out here. He got with Ed Brown and Ed Brown taught him the importance of coaching young men. That turned into administration, which turned to principalship and that kind of helped me get where I’m at.”

Scott’s relationship with his dad is so close, he calls him, “My guy.”

“He means the world to me. You know, everybody always talks about that with your parents you’re lucky to have who you have. You don’t get to pick them. I couldn’t pick a better guy if I had a choice. I mean, he is absolutely exceptional,” Scott said. “I look up to everything he does. I talk to him. I talk to him two or three times a day, and he’ll give me advice on everything I need.”

Scott paused a moment to gather himself.

“He’s done everything from being the janitor to being the principal. He’s done all that in between,” Scott said. “You know, again, I mean, it’s hard. I get emotional talking about it, because that’s my best friend. And that’s my guy. I just wish I wish he was physically healthy to be out here all the time.

“He looks like he played football. He played at full speed. Now he’s paying the price, but if you asked him, he would tell you that he would never trade that. He says that his experience at the U of A and coaching was the best thing in the world to him. It gave him a chance to be the man he is today and he’s a cool guy.”