A generation ago, the dads of Salpointe standouts Charlie Raetzman, Luke Regina and Trent Strong were on Arizona’s campus living out their dreams of being college athletes after excelling in their respective high school careers in Tucson.

Steve Strong, a Sabino grad, was an All-Pac-12 Southern Division catcher who was part of Arizona’s 1986 College World Series team. Steve is a wealth management adviser for Merrill Lynch.

Keith Regina played with Arizona’s baseball team in 2000 and 2001 after a standout career with Salpointe as a running back and placekicker in football and outfielder in baseball. He played baseball at Central Arizona College before joining the Wildcats. Keith is active with the Tucson Youth Football and Spirit Federation as the director of the Scorpions organization.

Garrett Raetzman was talented in football and baseball at Catalina in the early 1980’s. He walked on at Arizona in 1983 as a quarterback. Garrett’s father, Charles (Charlie’s grandfather), was a standout right guard for the Wildcats who lettered in 1958 and 1959 after a stellar career at Catalina. Garrett owns the Frog N’ Firkin restaurant/bar near the Arizona campus along with his wife Jody.

“You want to live up to that. You want to follow in their footsteps,” said Charlie, a senior cornerback, of the legacy aspect. “You want to play hard for yourself and always for the people who played before you. All three guys (the dads) are leaders and a big part of who we are as men today.”

Two to three decades after their dads were in the headlines as athletes, the sons of former Wildcats are pursuing the same goals of playing in college while leading Salpointe in each of the important defensive statistical categories as seniors — Raetzman with six interceptions, Regina with 9.5 sacks and Strong with 65 tackles.

Because of the contribution of these three players and others, No. 4 Salpointe (9-0) enters its Open Division quarterfinals game against No. 5 Phoenix Pinnacle (8-2) on Friday at home with much more than Division I prospects Bijan Robinson at running back and Lathan Ransom at wide receiver and safety.

“I’m really proud of our team. I’m proud of everybody. We’ve all worked our butts off,” said Regina, a 6-foot, 190-pound talent who aspires to play rugby in addition to football in college.

Salpointe also features the legacy of former Arizona offensive tackle John Fina, who coaches his son Bruno, a senior with the Lancers who is bound for UCLA. 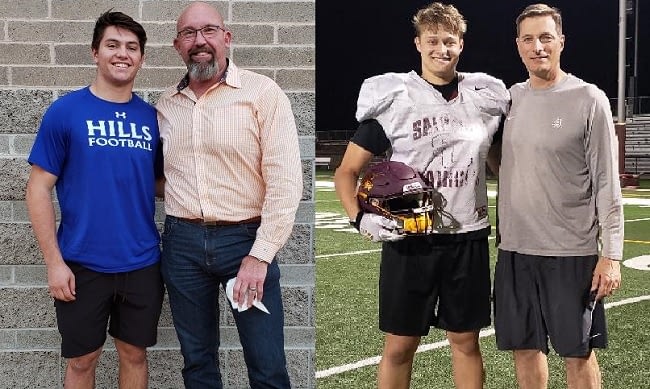 Share Tweet John Fina and Glenn Parker’s existence on the football field together extends from two years at Arizona to five seasons with the Buffalo Bills and now as offensive line coaches on opposite sides as part of the coaching staffs where their sons play. Fina with his son Bruno and Salpointe v…

The following are recent video interviews with Charlie Raetzman, Luke Regina and Trent Strong about their legacy with their dads, Salpointe’s outlook against Pinnacle, playing the final games of their high school careers with coach Dennis Bene (who is resigning at season’s end) and what it would be like to have to tackle Robinson in a game, among other topics: