The Roadrunners’ first opponent in their inaugural season will be Pacific Division rivals, the San Diego Gulls. The Gulls are the AHL affiliate of the Anaheim Ducks and finished second in our division last season with a record of 39 wins, 23 losses, and 4 overtime losses. The Gulls qualified for the 2016 Calder Cup Playoffs in and were eliminated by the Ontario Reign in 5 games. 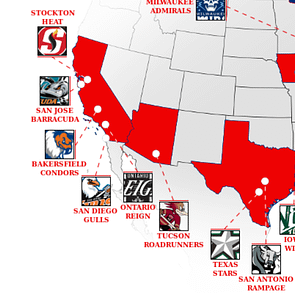 A map of the AHL’s Pacific Division

The first meeting between the Roadrunners and the Gulls will be today, October 14th, 2016. The puck drops at San Diego’s Valley View Casino Center at 7:00 PM Mountain time. Tucson will play San Diego a total of 12 times this season; with six games at home and six on the road. After today, the next meeting between the two will take place in Tucson on November 22nd.

All home games will be played at the Tucson Convention Center and all 68 of their games can be live streamed on the AHL’s website.