Last night in their first home opener in franchise history, the Roadrunners treated fans with a thrilling 6-5 victory over the Stockton Heat. Starting in goal for Tucson was Adin Hill and for the Heat was Jon Gilles. 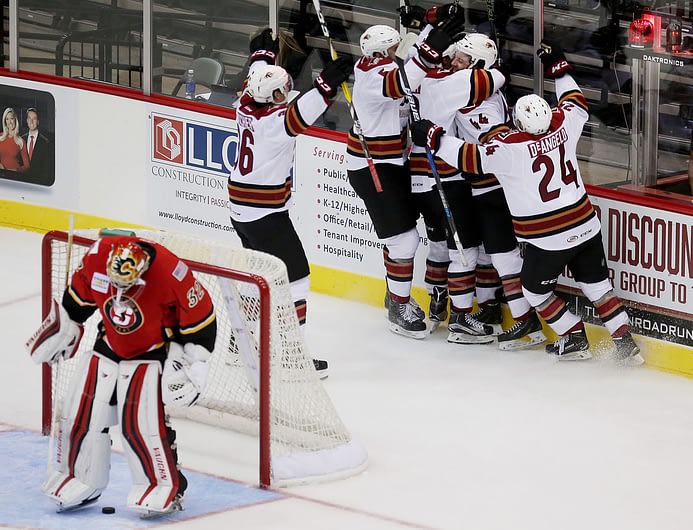 It was all Stockton in the opening phases of the first period; they were out-shooting, out-possessing and the Roadrunners just couldn’t seem to get it out of their zone. This combined with a few bad rebounds given up by Adin Hill, led Stockton to quickly jump out to a 3-0 lead. The goals for Stockton were scored by Mike Angelidis 2:18 into the period (assists: Brandon Bolig, Rasmus Andersson), at 3:35 Linden Vey (assists: Morgan Klimchuck, Rasmus Andersson) and at 5:11 Mark Jankowski (assists: Tyler Gaudet, Anthony DeAngelo).

After Stockton, score the three early goals, the Roadrunners respond with a strong forecheck, which led to Jarred Tinordi opening the scoring for Tuscon 8:37 into the game (assisted by Tyler Gaudet and Anthony DeAngelo). The Roadrunners were great at the end of the first and for the rest of the game at breaking out of their zone, and creating strong rushes into Stockton’s zone. Mark Olver (unassisted) sniped Jon Gilles 11:02 into the period, to cut Stockton’s lead to just 3-2 heading into the second.

After Olver’s goal, the Roadrunners had the momentum for the rest of the period. Shots at the end of the first were 17-11.

The first notable event to occur in the second period was a fight which saw Tucson’s Garrett Ross beat Stockton’s Ryan Lomberg. After gaining some momentum temporarily due to the won fight; the Roadrunners quickly lost all of it after taking an unnecessary penalty. After an active, scoreless power play, Stockton was playing the stronger game; this led to Morgan Klimchuck (Assist: Mike Angelidis at 6:02) to widen Stockton’s lead to 4-2.

After going down 4-2, the Roadrunners responded with strong play and ended up outshooting 14-8 in that period. This allowed Ryan MacInnis (assist: Conor Garland, Kyle Wood at 13:28) to score a power play goal and close the gap to just 4-3 Stockon. Just a minute and two seconds later Tyler Gaudet (assist: Christian Fisher) scored a shorthanded goal, tying the game.

The Roadrunners continued to dominate Stockton for the rest of the period.

The Roadrunners kept their momentum from a strong third period and were able to score the go-ahead goal 3:35 into the period on the power play (scored by Chris Mueller; assists: Anthony DeAngelo, Jamie McBain). Stockton tied the game on a goal by Ryan MacInnis 10:03 in the period and was assisted by Linden Vey and Rasmus Andersson. Coming out straight out of the box after drawing a penalty, Eric Selleck scored the game-winner for Tucson (at 16:50; assists: Tyler Gaudet and Anthony DeAngelo). The third was Adin Hill’s best period as he only let in one of Stockton’s 16 shots in the period. The final score of the game was 6-5 Roadrunners.

The Roadrunners will play the Heat again,tomorrow, Sunday October 30th at 4:05 PM.