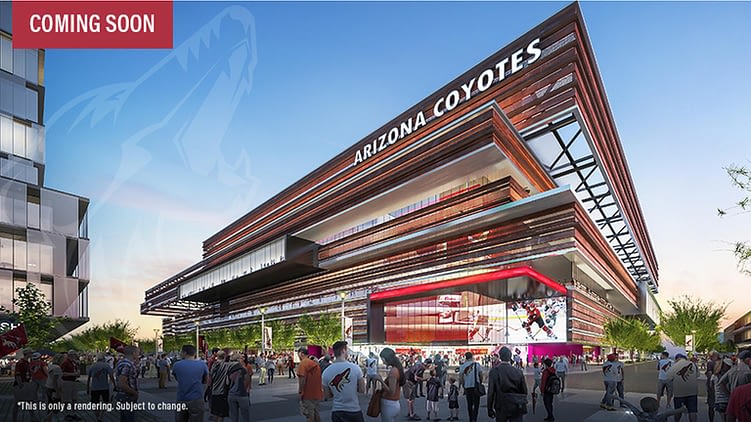 For much of the past six years (in particular between 2010 and 2013) rumors about moving to Winnipeg, Hamilton (Ontario), Quebec City or Seattle have constantly surrounded the Coyotes franchise. However, two moves by the Coyotes Ownership group in 2016, has proved that hockey is here and here to stay. The first was the purchase of their AHL affiliates and its subsequent relocation to Tucson; and now a new arena.

The poor location of their current arena in Glendale and the financial struggles caused by it has forced the Arizona Coyotes to make a much-needed move to an East Valley Arena in Tempe, AZ. The move brings the Coyotes closer to the heart their fanbase, which is concentrated in the large East Valley suburbs of Scottsdale, Tempe, Chandler, Ahwatukee, and Gilbert. The new Tempe arena will also make the drive to see NHL hockey half an hour closer for Tucson hockey fans (1 and 1/2 hours instead of 2).

The new arena will be located on the northwest corner of McClintock Dr. and Rio Salado Pkwy. in Tempe, Arizona minutes from ASU’s main campus. The facility will include one 16,000 seat arena for the Coyotes and a separate 4,000 seat arena for ASU’s new NCAA DI Hockey team, youth hockey, and Coyotes practices. The Arenas are expected to cost between 300 and 500 million dollars and will be almost entirely financed by the Coyotes and ASU. An official budget will be announced by no later than June 30, 2017, and the Tempe Arena is expected to be ready for the 2019-2020 NHL season.

The creation of the Tucson Roadrunners franchise and now a new state-of-the-art Arena in Tempe has mercifully ended all rumors that the Coyotes are going to leave the state. The announcement the new 4,000 seat separate arena marks the opening of Greater Phoenix’s seventh public ice rink (12th sheet of ice; all but two of Phoenix’s rinks have multiple ice sheets) which will continue help grow the hockey at the grassroots level in the state. The announcement of a Tucson public ice rink, built by the Roadrunners/Coyotes organization and the U of A Wildcats Hockey is also expected in the near future (something I’ll write an article on later this week).