In the first of a two-game series against the San Jose Barracuda and on Craig Cunningham night, the Tucson Roadrunners lost 5-2. Cunningham, the Roadrunners captain who collapsed before a game against the Manitoba Moose back in November, received a painting, a signed commemorative AHL All-Star Game jersey and dropped the ceremonial opening faceoff. In goal, it was Adin Hill for the Roadrunners, and Troy Grosenick was between the pipes for San Jose. 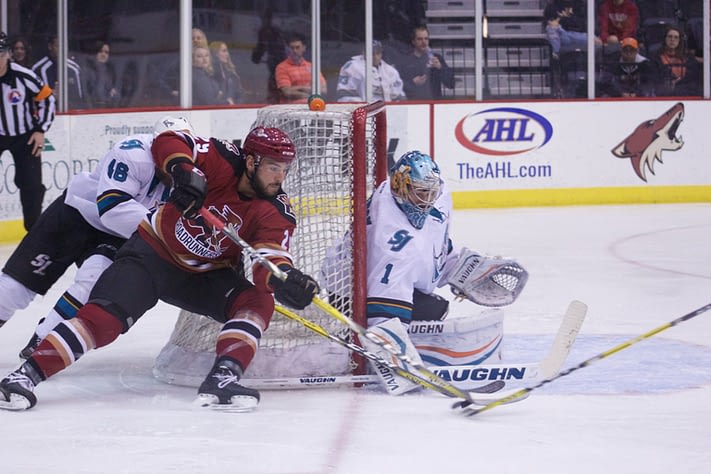 The first-place Barracuda dominated the game out of the gate, outshooting the Roadrunners 10-1. Their shot and possession advantage allowed Barracuda right winger Ryan Carpenter to open the scoring. However, the Roadrunners’ goaltending was solid as Adin Hill stopped nine shots, holding the deficit at one.

The Roadrunners stormed back in the first half of the second period as Branden Trook crashed the net, scored, tying up the game.

//platform.twitter.com/widgets.js
About eight minutes in, veteran forward Eric Selleck got on a breakaway, sniped Grosenick, giving the Roadrunners their only lead of the game.

//platform.twitter.com/widgets.js
After that, the Roadrunners conceded a shorthanded goal in what would end up being a turning point for the Barracuda. After that, it was all San Jose for the remainder of the game. Late in the second, Ryan Carpenter deflected shot up front, putting the Barracuda up 3-2.

Look for the Roadrunners to bounce back tomorrow, in an afternoon rematch against San Jose.