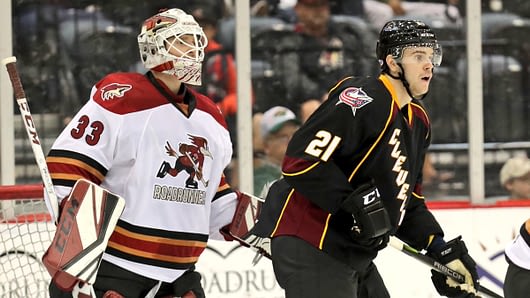 In what would ultimately end up being a low-scoring matchup, both teams would strike early and make it 1-1 before the first period was over. Michael Bunting would open the scoring for the night and game, scoring his second goal of the season on the first shot of the game, off of an assist from Conor Garland. Shortly after the Roadrunners failed to score on their first power play of the game, Brady Austin’s glove-side slapshot, found its way cleanly past Adin Hill, to tie the game at one.

After Austin’s goal, which was scored a bit less than seven minutes into the game, it was a goaltending showdown between Adin Hill and Cleveland’s Matiss Kivlenieks for the rest of the game. Both goaltenders recorded exceptional save percentages, 0.931 for Hill and 0.952 for Kivlenieks, as both kept the game scoreless for the remainder of regulation.

Tied 1-1, heading into the sudden death overtime period, Cleveland controlled the majority of the play in overtime. The Roadrunners’ only good chance came as Tucson forward Nick Merkley, skated up the ice and failed to score on a wrap-around attempt. On the following play, Carter Camper would score the game-winning goal for Cleveland, giving them the 2-1 win in overtime.

The silver lining for Friday night was that the Roadrunners now have points in 7 straight games, gaining a single point in the standings with the overtime loss. Their 5-1-2 record is still the best in the AHL’s Pacific Division and Western Conference.

However, Friday night was overall a poor effort by the Roadrunners. Although he probably would have liked to have the first goal he let in back, Adin Hill carried Tucson for pretty much the entire game. Without his stellar play, Tucson could have easily lost this one in regulation, as the Roadrunners’ struggled to gain puck possession and had difficulty making accurate passes throughout the night.