Last night the Tucson Roadrunners played without a doubt the best game of their season, beating the Bakersfield Condors 6-3 at home. The Roadrunners are playing excellent hockey this season, having the best record in the AHL and the Pacific Division. Here are my three key takeaways from both their performance Friday night and in the season so far. 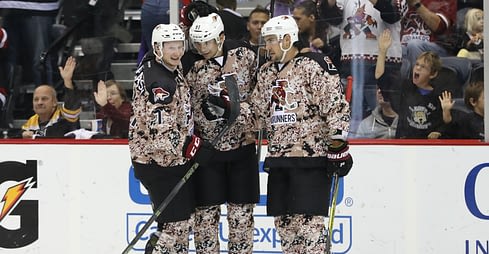 Something that’s been apparent in each of the Roadrunners’ wins and especially last night is the sheer amount of talent on their roster. Tucson’s top forward line of Nick Merkley (30th overall, 2015), Dylan Strome (3rd overall, 2015) and Lawson Crouse (11th overall, 2014) is composed of three recent first-round NHL draft selections.

With two highly talented 20-year-olds and one 21-year-old playing 20 plus minutes a night, the Roadrunners can play a run-and-gun style that few if any teams in the league can match. Tucson’s fast-paced, aggressive play was put on prominent display in last night’s game, and they ultimately won because they forced Bakersfield to play Tucson’s game.

The fast-paced play gave many breakaways and odd-man rushes to both teams; the problem for Bakersfield was that they didn’t have anywhere near the speed or skill outscore Tucson playing that type of game. Last night, Bakersfield was out-matched and out-gunned by Tucson’s elite players all night long, as the Roadrunners registered a season-high 42 shots on goal, to Bakersfield’s 26. The bottom line is if Tucson can even play 75% as good as they did Friday, night in and night out, the Roadrunners will be an unstoppable force in this league. Currently, Tucson is 1st out of 30 teams in the AHL’s standings with a 7-1-2 record, and unlike last year, they show no signs of slowing down.

I have watched thousands of pro hockey games in my lifetime, and I have only seen a performance on-par with Tucson’s second period two, maybe three times at the professional level. It would be impossible for me to overstate how badly Bakersfield got man-handled by the Roadrunners in the second frame of last night’s game.

In the period, Tucson outshot Bakersfield 22-3; to put that in perspective, the 22 shots Tucson got in 20 minutes was only 4 less than what the Condors had in the full 60 minutes of the game. You honestly could have sworn that the ice was tilted. Also, in the period Tucson outscored Bakersfield 4-1, a tally that exceeds many full-game totals.

Bakersfield’s lone goal of the period came on a two-on-one, odd-man rush that was the result of a Roadrunners defenseman pinching and joining the rush; something that naturally happens when a team plays as aggressively as the Roadrunners. The important thing is, that style of play let Tucson find the back of the net four times in the second period, making that one goal an acceptable concession for the Roadrunners.

Perhaps the most exciting thing about this Roadrunners’ roster is that we are witnessing the development future NHL stars in both Dylan Strome and Nick Merkley every night at the TCC. Both are only 20-years-old, have incredible pedigree (there’s a reason why both went in the first round in their draft year), and likely have decade-long NHL careers ahead of them.

20-year-old Dylan Strome in his first game as a Roadrunner.
Source: Twitter @RoadrunnersAHL

Let’s start with #91, Dylan Strome, undoubtedly the best hockey player to ever to play for a Tucson-based hockey team. No disrespect intended to other players that have spent time in this great city, but its true. He led the best junior hockey league in the world, the OHL in scoring in his draft year with 129 points in just 68 games in the 2014-15 OHL season.

Just to give you an idea of how good that league is, 2 out of the 3 greatest hockey players in history, Bobby Orr and Wayne Gretzky both played their junior hockey in the OHL. Unsurprisingly, Strome was the best player on the ice last night, collecting 4 points (2 goals, 2 assists) giving him a team-leading 14 points in 9 games with Tucson this year (1st among rookies); Strome is also averaging an AHL-best 1.56 points per game.

Up next is #38 Nick Merkley, who had 90 points in 72 WHL games, the second-best junior league in the world in his draft year. This year, he leads the Roadrunners with 7 goals in 10 games (tied for third in the league), and has 11 points in 10 games; which is second on the team only to Strome and fourth among all AHL rookies. Merkley also played a great game Friday night, scoring 2 points (1 goal, 1 assist) with a team-high 8 shots on goal.

The one-two punch of Strome and Merkley on the top line forms arguably the best dynamic duo in the entire American Hockey League with the two of them combining for 25 points this season. They are also developing the excellent chemistry that will help Tucson win a lot of games this year and help them in their future NHL careers.

It’s incredibly rare to see talents like Strome and Merkley in the AHL, playing on the same team and same line. Both are good enough to play in the NHL right now, but Coyotes management is taking the right approach to player development with these guys. Essentially the organization has decided that Strome and Merkley are learning more tearing up the AHL, playing top-line minutes on a winning team than they would be playing third or fourth line minutes on a losing NHL team. One thing is for sure though, be on the lookout for #91 and #38 next time you visit the TCC.