The Arizona Wildcats Men’s club hockey team is in the midst of their best season since winning the ACHA national championship back in 1985. They finished the regular season with a 31-7 record, swept their season series against ASU’s club team, and won their first WCHL championship this year. 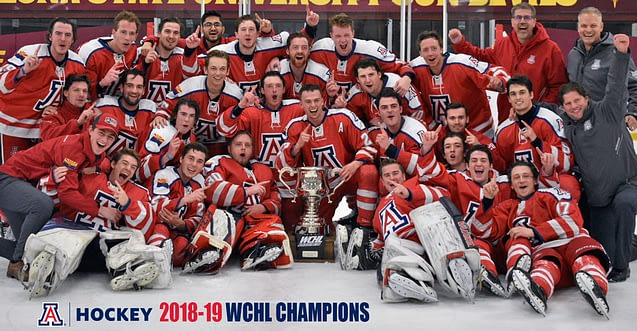 As a result of their performance, the Wildcats earned the 9th seed in the upcoming Division I ACHA national championship, the highest level of Men’s club hockey in the United States. Arizona also dominated the WCHL’s individual player awards with forward Bayley Marshall winning the league’s MVP award and Arizona coach Chad Berman being named the WCHL’s coach of the year. Marshall along with fellow Arizona forward Anthony Cusanelli and Wildcat goaltender Anthony Ciurro were also named WCHL first-team all-stars.

As the ninth seed in the upcoming ACHA national tournament, they will play the eight seed, Liberty University in the first round on Saturday, March 23rd. However, much more is on the line for Arizona hockey this year than just the possibility of winning the national championship at the ACHA level.

Last year, I wrote an article about why I believe the U of A should expand into NCAA hockey (linked here), and success this year and over the next few seasons at the ACHA level could provide the Wildcats a path to NCAA Division I hockey. What happened to Arizona State’s Men’s Hockey team in the early 2010s shows exactly how success at the club hockey level could eventually bring full-fledged NCAA college hockey to Tucson.

Arizona State built an excellent ACHA program in the 2000s and early 2010s that eventually won the ACHA Division I national championship back in the 2013-14 season. Just two seasons later, in the 2015-16 season, the Sun Devils began their transition from the ACHA to the NCAA. The Sun Devils’ transition to the NCAA has been incredibly successful and given ASU’s success, its hard to imagine that with continued success at the ACHA level, the Wildcats won’t try to make a similar switch soon.

The Sun Devils are looking like an emerging NCAA hockey powerhouse. After posting a combined record of 23-62-10 in their first three years of NCAA Division I play, the Sun Devils have decisively turned a corner this season. Led by Phoenix-native Johnny Walker, who is second in the entire NCAA in goals with 23 on the season, ASU is 21-12-1 this year and is ranked 13th nationally.

The fact that the Sun Devils are ranked and will compete in the NCAA national tournament this year is remarkable considering that ASU was still a club ACHA team just four years ago. Arizona State’s example shows that success at the ACHA level could give Arizona a path towards a successful jump to the NCAA.

Even with Title IX restrictions, if the Wildcats continue playing well at the ACHA level this season and over the next few years, the U of A’s Athletic Department would be hard-pressed not to at least to consider starting an NCAA hockey team. In addition to the fact that Men’s hockey is the only major NCAA sport that the U of A does not compete against ASU in, the Sun Devils have shown Universities can successfully build quality NCAA hockey programs in states like Arizona.

The Wildcats are on the right track, and if they build on this year’s success, we could see the U of A competing in another NCAA sport very soon.