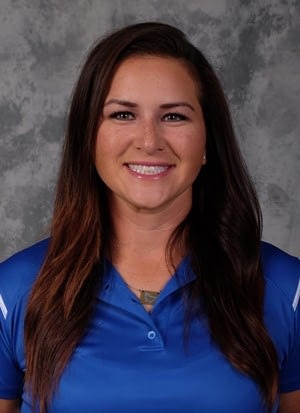 Former Buena standout Erika Bennett was named the pitching coach for UTEP last Monday. A 2008 graduate of the Colts, Bennett experienced an exciting and educational decade of playing and coaching that led up to her latest hire.

“I applied for the same position four years ago but that didn’t work out so I took my first position at the junior college level to get more experience,” Bennett explained.

“I saw the job was open again this summer and I went for it again and the head coach (Tobin Echo-Hawk) asked me why I applied this time. I saw it as a great opportunity to be closer to home and I wanted to be a part of Conference USA again.”

After high school, Bennett went on to earn All-American and MVP status at Miami-Dade while collecting a 47-8 record from the circle and a national championship in 2010. From there, Bennett transferred to play for Marshall, a member of Conference USA.

“I was really hot for Miami when I went on a visit there,” Bennett said. “The coach (Carlos Caro) was really encouraging and he helped me out a lot.”

Her experience at Miami-Dade, specifically a friend with contacts with the Mexican national softball team, led to a spot on that team in 2013 and Bennett has been pitching for Mexico ever since, including the World Cup of Softball in July.

Bennett has a grandmother living in Mexico and the atmosphere at Miami-Dade made that transition much easier.

“As a kid, you always think about playing for Team USA but we had girls on our team from Mexico, Brazil, the Dominican Republic, Canada and Cuba and most of them played for their respective national teams,” Bennett said.

Prior to all that, Bennett played on one of the most talented softball teams to ever take the field for Buena. The Colts finished in the semifinal round of the 5A Conference in 2005 and again in 2006 before taking second place in 2007. A quarterfinal finish in 2008 capped off the best years the program had ever seen and Bennett was a major part of the final two years of that run that finished with an incredible 56-15 record and that runner-up trophy.

“I grew up with all those girls,” Bennett explained. “I played with them from age seven with the All-Stars, the Sierra Vista Diamonds, The Hot Peppers, the Roadrunners and then high school. It was an amazing experience to play with so much college talent.”

Bennett transitioned to a relief pitcher at Marshal and finished 4-1 as a senior with a 2.26 ERA. From there, she became a graduate assistant at Lake Erie College in Ohio and then took that assistant coaching position at Dodge City. She was named the pitching coach at Florida Gulf Coast in 2015 and stayed there until UTEP hired her away.

“We did some incredible things at Dodge City and Florida,” Bennett added. “We had a low ERA and a lot of success. I want to be able to bring what I learned to UTEP. I’ve picked up a few things from good coaches and bad coaches on what kind of coach I want to be. I knew from age 12 that I wanted to coach and there hasn’t been a whole lot of things able to stop me. I’m excited to get started.”

Bennett spent this past weekend recruiting and is missing some international competitions with Mexico but the 2020 Olympics is on the horizon.