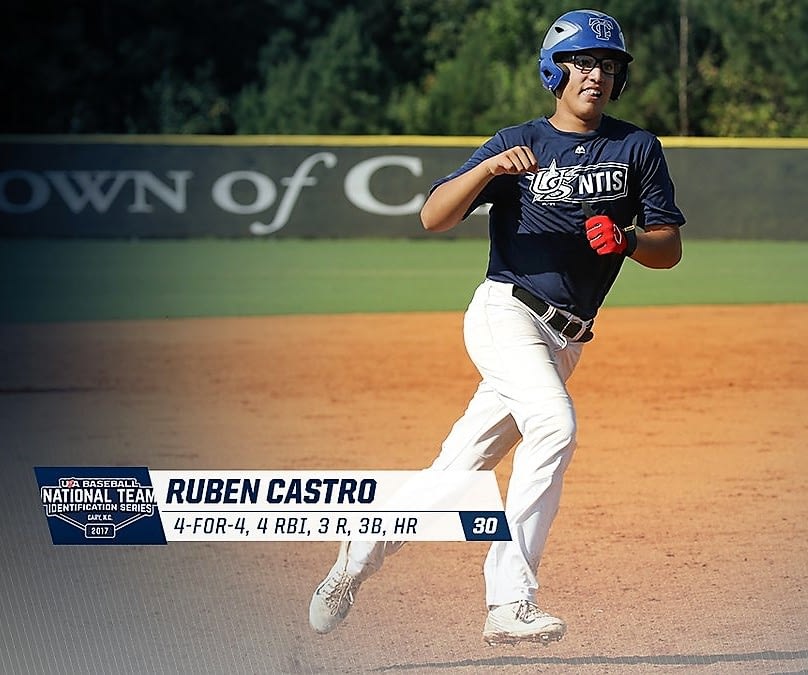 Ruben “Kito” Castro has had an amazing summer. The Roskruge eight-grader powered his Western Little League team to a District championship over Oro Valley by going 4-for-4 with two home runs, a double and four RBI while collecting 13 strikeouts from the mound and the hits kept coming when he took his bat to the national stage this past week.

As we exclusively reported in June, Castro made the USA Baseball 13U National Team Identification Series (NTIS) out of the Southwest which meant a Golden Ticket and a chance to get noticed by the coaches of USA Baseball during a week-long tournament in North Carolina.

The Southwest team beat the North Atlantic squad 16-2 to open up the tournament on Thursday, Aug. 10. The win moved the team to the quarterfinal round where they faced a tough team from South Florida on Friday. It was billed as the “Game of the Day” by USA Baseball.

Listed as a third baseman, Castro went 4-4 with a home run, triple and four RBI to help power Southwest to a 13-10 victory and a spot in the seminal round against the dreaded Southeast team. Castro’s home run was measured at almost 352 feet.

A 5-4 win over the Southeast team (Castro went 2-3) set up a championship game against SoCal on Sunday. SoCal took an early 2-0 lead and the gap was extended to 4-1 in the fifth but Southwest scored two in the bottom half of the fifth to make it 4-3.

One would have to think Castro is now on the radar to make the either the 14U Development Team or the 15U National Team at the very least. Castro will be playing for Tucson High.