The Badgers ended their season 4-6 overall and 4-1 in the 6A Metro region.

— DE Demaggio Strevay had seven tackles, three for sacks and other for loss.

— DT Hunter Schlagel had six tackles, one for loss. 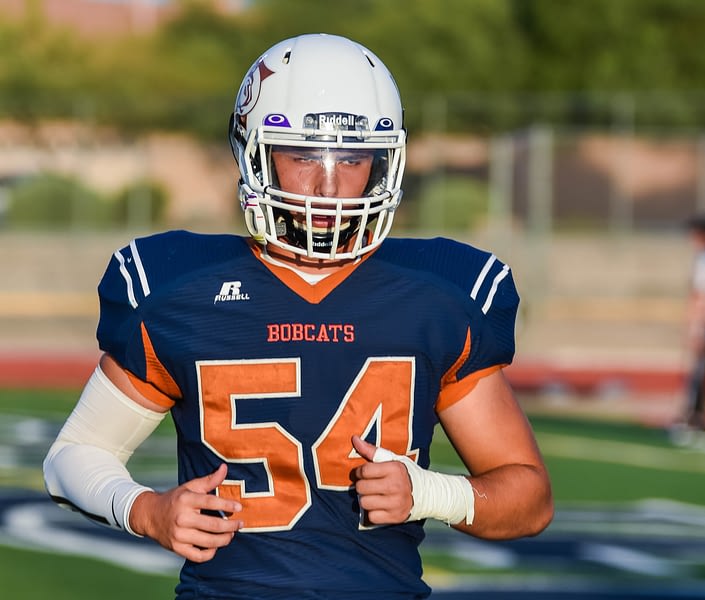 Share Tweet Cienega DE Damaggio Strevay (6-2, 230) collected three sacks and six tackles in a 10-0 victory at Ironwood Ridge last Friday. The win clinched the 5A Southern championship and a No. 7 seed in the state playoffs. Now with eight sacks on the year, Strevay is in the top five for all of […]

— QB Jovoni Borbon had TD runs of 5 and 3 yards and completed a 35-yard scoring pass to TE Jesse Avina.

— DB Angelo Arriola had an interception.

— QB Giovanni Ciaccio completed 7 of 9 passes for 162 yards with three TDs and no interceptions.

— RB Aaron Logsdon finished with 101 yards on five carries with a TD.

— WR Lloyd Love had seven receptions for 126 yards and a TD.

— RB Serge Gboweiah rushed for 232 yards on 10 carries with three TDs, including a 92-yard scoring run. He finished the season with 1,404 yards on 171 carries with 12 touchdowns.

— Gboweiah and Alvarez, both sophomores, are the first duo in Southern Arizona since 2013 to gain at least 1,000 yards each. Eight duos have done so since 2009:

Teammates who have rushed for more than 1,000 yards each in a season in the last decade.

— LB Anton Jamero had a team-high 13 tackles with a tackle for loss and he caused two fumbles.

— QB Samuel Brown, a freshman, completed 14 of 20 passes for 127 yards with two TDs and an interception. He also rushed for 29 yards on nine carries.

— DT Tanner Wengert had 11 tackles with three tackles for loss, including a sack.

— DB Kai Spencer had an interception and he recovered a fumble.

The Rangers finished 6-4, their first winning season since 2012 and only their second since 2006.

— QB Treyson Bourguet completed 6 of 8 passes for 107 yards with five TDs and no interceptions. All five of the TDs came in the first quarter.

— RB Bijan Robinson rushed for 87 yards on five carries with a TD.

— S Charlie Raetzman had two interceptions, increasing his total to six this season, and a pass deflection.

— LB Will Parker had eight tackles, two for loss. He also punted three times for an average of 57 yards.

— WR Demier Nelson had three catches for 42 yards with a TD.

#FINAL: Pueblo over #Amphi 25-0 shutout to finish the regular season 8-2. Warriors have done their part, now will wait for seeding for State Championships. #Playoffs 🏈 pic.twitter.com/rrsad9YQxv

— RB Francisco Monares-Leon had two touchdown runs of 8 yards and another for 49 yards.

— RB Tyler Mustain, a freshman, had 116 yards on seven carries with two TDs.

— LB Antone Brack recovered a fumble and returned it 72 yards for a TD.

— RB Michael Molio’o rushed for 100 yards on four carries with a TD.

— LB Wyatt Ogle tallied 10 tackles with one for loss.

— RB/LB David Ballesteros gained 105 yards on 12 carries and also had seven tackles, one for loss, an interception and a fumble recovery.

The Miners finished with a win, going 4-6 in Ernie Ivy‘s first season as head coach.

Santa Rita finishes 3-7 in Richard Sanchez‘s second season, the Eagles’ best record since 2014. Sanchez is 3-17 with the Eagles. He commented earlier this season that he is determined to stay at Santa Rita to get it back to a winning program.