Mike Feder found tickets to the World Series this week in Chicago – finally. He worked the phones. He worked his contacts. And, then …

Then he hoped and, well, hoped some more.

Then Saturday night, it all became a reality … the Chicago Cubs are headed to the World Series, their first since 1945. They play at Cleveland on Tuesday and Wednesday. They play in Chicago on Friday, Saturday and Sunday.

“I didn’t buy my plane tickets to Chicago until after yesterday’s game,” he said with a smile. “I didn’t want to jinx them.”

Jinx? How could he? These Cubs are legit, a year after a quick tease to the National League playoffs. 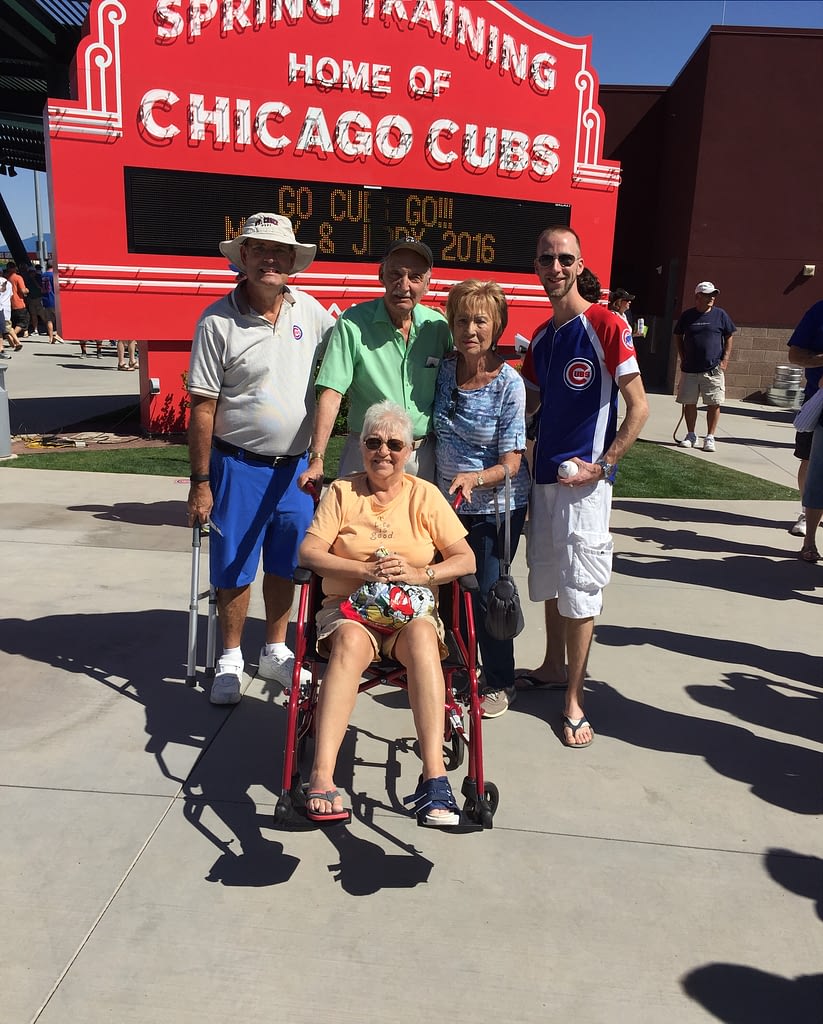 Feder, a well-known sports figure in Tucson handling Tucson’s minor-league baseball teams for years and now executive director of the Arizona Bowl, is headed to the World Series, too. Of course the Ernie Banks-loving, die-hard Cubs fan will be there.

And it’ll be a family affair for the Feders. He’s taking his 89-year-old father, Ed, his son, Nate, and a couple of relatives already there in Chicago.

“It’s going to be an out-of-body experience with the family,” he said.

A happy coincidence is his father will celebrate his 90th birthday at Game 5 on Sunday.

“This is huge for my dad as a gigantic pick-me-up after losing my mom in August,” Feder said. “They were both born and raised in Chicago as lifelong Cubs fans (married 67 years). He started following the Cubs at around 8 years old. In 1945, he was in the service so has never been in Chicago for the World Series!”

“I’ve waited 64 years for this moment,” Feder said. “This year was special because I was all in! Over all of the years of running minor league teams and the last two years with the (Arizona) D-backs, the Cubs were ALWAYS there, but not first because of my allegiance to the organization I was with. I really still can’t believe it!”

Feder played his part – just as any superstitious Cubs fans have in this playoff run. He’s done the same routine and has worn the same Cubs shirt and his “lucky U of A red shorts” for the games.

“After the two Los Angeles losses, Pattie (his wife) turned on the same lights, and not the living room light,” he said. “It was a little dark but the routine wasn’t going to change. I always used the word ‘if’ on social media posts when I was talking about the World Series. I will say the Bartman and goat stuff didn’t mean anything!”

He can say that now … and perhaps say it louder if the Cubs pull off the World Series victory.

Yet, he does believe in superstitions.

Even though he and his father live in Tucson they haven’t watched the games together. But, for a reason.

“We talked numerous times during the game,” he said.

“The Cubs were winning when I watched in my living room so I couldn’t change it! He also liked watching at his house. All I could think about after the game was how much my mom would have enjoyed it. I’m sure she was watching in her own way with a big smile. In her final days, she watched the Cubs game on her phone in bed.”

His love for the Cubs started early having grown up in the city and eventually “working” for the Cubs as a kid. “That ‘working’ can be used loosely,” he said.

“My ‘first’ job was helping clean Wrigley Field after games in exchange for a ticket to the next day’s game,” he said of his early teens.

“Not many kids knew about that. I always got autographs on my scorecards after I cleaned. The definition of cleaning was taking one row and going from the left-field corner and lifting the seats, then coming back from the right-field corner and stomping on cups. That made it easy for them to sweep.”

He kept every program where he went to the games and still has them. Many of them have autographs from famous players, including 100 from Banks.

As he got older – and into his teens – he “never missed a weekend Cubs game” sitting in the right-field bleachers. He’ll admit 1969 was a tough year when the Cubs were the best team in baseball only to see the New York Mets win it all.

“I was in Indianola, Iowa listening to every game on a portable radio and suffering,” he said.

This time, he’ll be in the stands – with family – and maybe, just maybe be able to celebrate and end all the suffering.