Arizona is back home for a final time before leaving for a nine-day break and the start of the Pac-12 season. What better way to end the preseason schedule than play former next-state rival New Mexico?

Tuesday’s meeting begins a home-and-home series with the Lobos, often a foil for Arizona through the years.

Just in the last 30 years, who can forget New Mexico knocking off the Wildcats, 61-59, just a day or so after UA become the No. 1 team in the country for the first time in 1988? 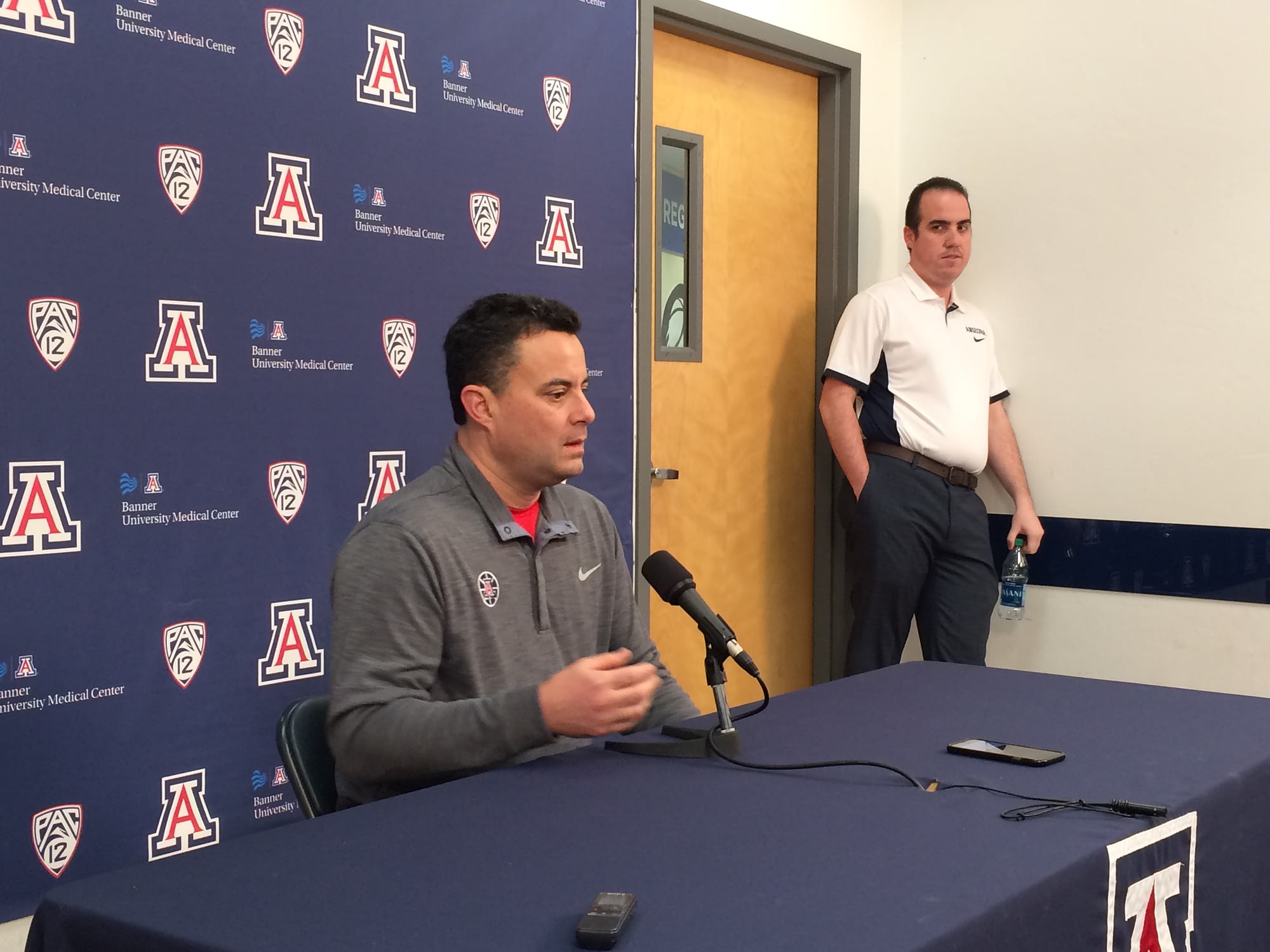 A season later, UA opened with a non-descript 80-67 win over the Lobos. Two years later, Arizona won again, 66-54, in Albuquerque. And, again a year later in Tucson.

Then the series took a rest for a few years before Arizona fell to UNM 84-77, the same season won the national title.

Two seasons later, everything hit the fan when Arizona lost 79-78 on a last second basket by New Mexico on a coast-to-coast catch-and-run play that seemingly took much time given there were less than five seconds left.

Former UA coach Lute Olson was so miffed by the play that he vowed to never return to UNM and the famed “Pit.” And he didn’t – at least not by choice. UA played in an NCAA game a couple of years later (and yes, fans booed the heck out of Olson).

A year after the last-second upset, UA lost again to UNM in Tucson, 70-68. And the series ended … until now.

The two schools have renewed home-and-home agreement that will see Arizona return its game next season. Miller said it’s “something we’ve had our eyes on for some time” to get going.

“It’s going to be a great two-game series,” Miller said. “Hopefully, we will be ready (on Wednesday.”

Miller on Monday continually called New Mexico a “top flight program” and a “high-major program” and “a quality team and program.”

Miller said he knows some of the history between the schools, saying “sounds like they were very emotional, super-charged, but that’s really what’s fun about college basketball. It prepares you for what’s to come.”

Lots of minutes means lots of experience – so you’d think

At some point – maybe soon, maybe not – Arizona is expected to get Parker Jackson-Cartwright and Allonzo Trier. The former for sure and the later at some point but we’re not sure when.

When I asked a hypothetical of two players coming back in the future and the two helping the team, Miller said what’s happened in the first two months without some players has only helped.

“If we were able to get our whole team back, all of us would point to this stretch here – really the whole year from the beginning of the school year – through tomorrow’s game as being incredibly beneficial,” Miller said. “Everybody who has played on our team has had a bigger role (and) more pressure to perform.”

And, what about today’s young players?

You can always expect a good answer from Miller when he’s talking about recruiting and the players of today. He didn’t fail on Monday when colleague Anthony Gimino asked him about the basketball IQs of incoming freshmen these days. Are they better than in the past?

“No,” Miller said, with a long pause. “I think freshmen come to college basketball with more unrealistic expectations than ever before. That statement is the most obvious one that a college basketball coach can make. Nobody truly understands the process that is going to be required to achieve what they want to achieve.

“The one-and-done model is completely upside down in any area of civilization. It’s like; you don’t become a lawyer and go to law school for a year. First of all, you have to do an incredible job as an undergraduate student to even get into a law school. Then you have to take the test to further establish that you’re qualified. And then you have to get all the way through it, and then when you get to be a lawyer, you don’t own your firm; you’re the low man on the totem pole, right? In 15 or 20 years, it’s like, look what I established and now you’re prepared and you have experience. That process is well-defined.”

He then asked if he should he keep going? Of course, it was good stuff.

“A doctor, a college professor … you don’t leave college as an undergraduate student and say, ‘I’m all set here. I’m going to be one of the best teachers at the University of Arizona.’ So, why in god’s name would anyone think that taking a 17- or 18-year-old kid … most of the time what nobody understands except the college world, is that their thought process on becoming an NBA player starts in 10th grade. It’s not about college. And then when you’re in college, if the bump in the road happens, it is a true test of humanity. Are you going to blame the coach? Who are you going to blame? And if you’re not going to blame someone, are you going to stick to it and understand that you’re doing great and that it’s only a matter of time before you’re going to get there. It’s just a really hard dynamic in college sports; it’s very, very difficult in college basketball. I don’t think it’s good for anything. But that’s the way of the world. We’re going to do the best we can. But, no, incoming freshmen are no more prepared than they were 20 years ago. It’s just that the process is completely upside down.

So, if the IQs aren’t better is the talent level compared to the past?

“No,” he said. “If (former UA All-American) Sean Elliott was Sean Elliott as a freshman, you guys would have never gotten to know who he became. He was going to leave after one or two years. I mean, how good was (former UA player) Damon Stoudamire at Christmas of his freshman year? He was just a little guy on the team. And there are a lot of people who would tell me Damon Stoudamire is arguably the greatest guard to play at Arizona. If you judged Jason Terry at Christmas of his freshman year, and he was disgruntled about his opportunity to play and he left Arizona in the spring of his freshman year, think about how different that is. That’s the culture, not at Arizona right now, but in college basketball. …

“It’s just a different game right now. I guess for those guys who are really, really talented, their upside is making money because they leave and they’re in the NBA for a longer period of time. You can make the case that that’s great for him. But they’re the 1 percent. The other 99 percent, it’s just a hard situation.

“I’m not even frustrated. It’s is what it is. We’re led by three freshmen in scoring. We’ve embraced it. If somebody wants to be one-and-done, we’re going to do everything we can to try to help them get there. I try to be honest. We’ve had players who talk about that, and if you see that that’s not the case you have to step forward and say, that’s not the case. And then sometimes maybe they don’t come to Arizona.”

And that was the end of those two questions.