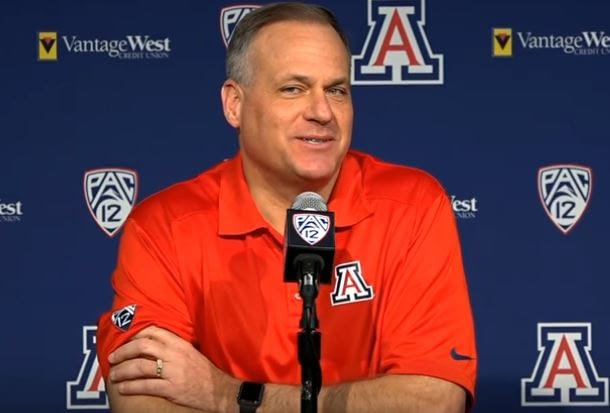 Rich Rodriguez talks to the media on Signing Day.

I tend to be a recruiting contrarian.

If you say a recruiting class looks great, I’ll start coming up with a long list of four-star recruits at Arizona that, for whatever reason, never panned out. At least fans have stopped asking about linebackers Jamardre Cobb and Marquis Ware.

On the other hand, if you instantly dismiss a recruiting class as average or substandard — or bemoan that this once-promising Arizona class dropped all the way to 45th in the 247Sports Composite rankings — I’ll say, “Who cares?”

Just wait and see. You never know how it is going to turn out.

Everybody would love to be Alabama or Ohio State or USC on Signing Day, but Arizona lives in a different world, where you have to do more with less — at least when it comes to how many stars are behind a prospect’s name on the recruiting service web sites.

The Wildcats have seemingly dropped their OKG recruiting rallying cry, perhaps because too many of the guys they were getting weren’t really “Our Kinda Guys.” Not enough talent. Not enough guys who loved football. That’s the worst combination.

There’s only one way back for Arizona, on its heels after a 3-9 season and a 1-8 record in conference play. And that is to recruit better. This class might not greatly alter the win-loss calculus of the 2017 season — a healthy combination of quarterbacks and running backs will have much more to say about that — but there are some intriguing pieces here for the short-term future.

For kicks, let’s just ignore all the what-might-have-been of this recruiting class and say the glass is half full. Here is what’s to like.

He’s the headliner, a consensus four-star recruit who is already enrolled. He ran for 2,031 yards on 223 carries at Colony High School in Ontario, Calif., also picking up 601 yards on 25 receptions. He scored a total of 38 touchdowns.

He’s a well-built 6-foot-1 and 205 pounds, giving the Wildcats a bigger, thicker back to pair with oft-injured Nick Wilson and jitterbug J.J. Taylor.

“He’s a big back. I think he’s been highly recruited since he was a freshman probably,” Rodriguez said.

“We weren’t sure when we were recruiting him that he could even enroll early. Enrolling early was just a bonus, because now he’s working out with the guys and he’s got a chance to learn under Coach Magee (running backs coach and co-offensive coordinator Calvin Magee).

“We have to get deeper at all positions, but especially tailback. We know what happened last year. The nice part is we’re going to have a good variety of different type of tailbacks.”

Wilson-Taylor-Tilford could be one of the top groups in the Pac-12. Behind that trio, the Wildcats have senior Zach Green (last seen rushing for 126 yards against Arizona State) and they flipped Temple commit Gary Brightwell on Signing Day.

RichRod says RBs Nick Wilson and J.J. Taylor will be all good to go when spring ball opens Feb. 18. Both ended '16 injured.

Arizona landed a nice in-state pair of edge rushers in Jalen Harris from Mesa Desert Ridge and My-King Johnson from Tempe High. They are rated as two of the top three defensive ends in the state.

Harris and Johnson project as hybrid defensive end/outside linebacker kind of players. Each could stand to put on some weight and will assuredly do just that.

“We had to get guys who could rush the passer,” Rodriguez said. “In this class we have guys who can play both — d-end and linebacker. And then we have guys who are long, athletic pass-rush guys. So, we got a lot more athletic.”

Harris and Johnson are listed as defensive ends. Arizona signed three outside linebackers, including early-enrolled Tony Fields, another guys to consider as a potential immediate contributor.

And then guys listed at inside linebacker — Joshua Brown and Colin Schooler — could end up as edge rushers in passing situations, too. Rodriguez referenced the 2014 season when linebackers Scooby Wright and Derrick Turituri turned into edge rushers on third down.

“Those were guys who could linebacker on first and second down and be pass rush guys on third down … kind of give us two players for one,” Rodriguez said. “We have struggled with that the last couple of years. In this class we have linebackers who can play both, kind of a pass rush d-end and then linebacker.

“And then we have guys who are long, athletic pass-rush kind of guys. So we got a lot more athletic.”

Rodriguez said he will add more guys to the defensive front via walk-on or delayed scholarship.

“The whole athleticism of our defense, in particular the front seven, is changing in the next year and a half.”

Perhaps none of the four safeties really stand out in terms of recruiting rankings, but they appear to fit the physical profile that Rodriguez and the staff re-emphasized after the 2015 season.

Collectively, let’s call them the sleepers of this class.

If nothing else, these are the types of athletes and body types that can help on special teams, which have been abysmal because of the team’s lack of depth.