The sky is not falling, only Oregon’s 3-pointers did that in the Ducks’ 85-58 victory over the Arizona Wildcats today in Eugene, Ore.

The Ducks shot 36.2 percent from 3-point range entering the game. They made a Matthew Knight Arena-record 16 of their first 21 attempts (76.1 percent) today.

If they shoot to their percentage, the Ducks would have made about eight 3-pointers and not 16 (36.2 percent of 21 is 7.6). That translates to 24 points from beyond the arc instead of 48. The adjusted final score becomes 61-58 in that case. 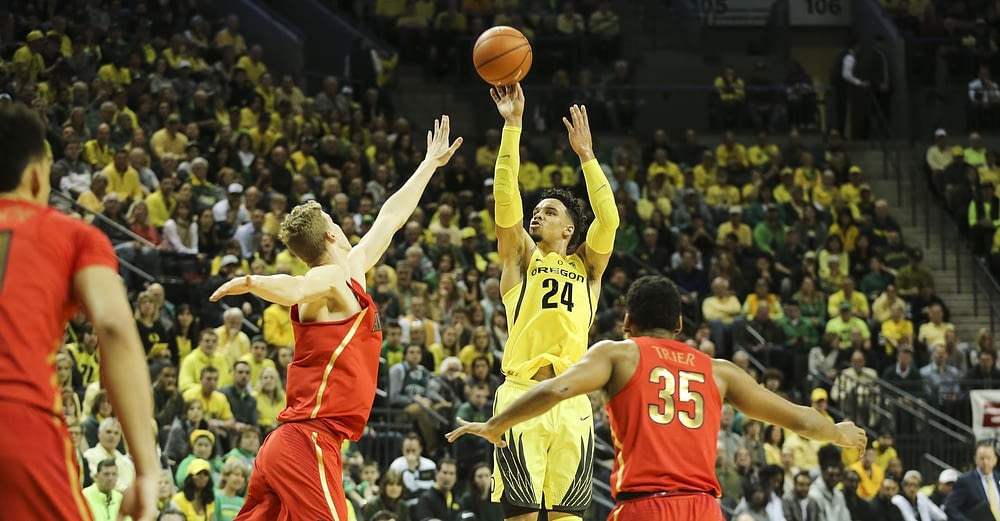 Oregon wound up shooting 16 of 25 from 3-point range but the last four misses occurred well after the game was no longer in doubt.

This is all after the fact, but the reality is Oregon does not normally shoot 3-pointers like that and the Ducks will likely not have a 16-of-21 stretch again. That’s just not realistic.

“It was getting ridiculous,” Dillon Brooks admitted. “But guys feed off each other. One guy’s hot, another guy gets hot. In this game it was like five, six, seven guys that got hot.”

Tyler Dorsey, for example, made all six of his 3-point attempts. He shot 36.2 percent from beyond the arc entering the game. If he shoots to his percentage, he is 2 of 6 instead.

But he didn’t. He made all six. Only thing to do: Take it on the chin and move on.

Arizona loses by more than 10 points for first time in nearly four years, so naturally … pic.twitter.com/Nnh0Mj4BcZ

“Nobody is yelling at anybody; we’ll bet better as a team,” Sean Miller told Brian Jeffries in the IMG radio postgame show.

This is only the 12th time in the Lute Olson and Sean Miller eras (32 seasons) in which the Wildcats lost by 20 points or more. Arizona has generally experienced success after such outcomes except for Olson’s last season on the bench in 2006-07 and Miller’s first season in 2009-10.

Check out this graphic for proof: