Arizona’s 62-58 victory over ASU on Friday night in a Pac-12 women’s basketball game at McKale Center carried significance other than the Wildcats beating their arch-rivals for the first time since 2014.

It meant Adia Barnes is 9-0 against ASU as a player and now coach — she is in her first season coaching her alma mater.

Does it get any better than that for Arizona in the annals of the Duel in the Desert or Territorial Cup or whatever you want to call the heated rivalry between the in-state schools?

The Wildcats have ruled the men’s basketball series since Lute Olson was hired in 1983 with a 54-15 record. During that time, Arizona had a winning streak of 11 games and 12 games twice. Therefore, many Arizona players have enjoyed success against ASU. Matt Muehlebach, for example, not only won every game at McKale Center in his career, he also never lost to the Sun Devils from 1987-1991.

Their victories against the Sun Devils, although admirable in the eyes of Arizona fans, came to be expected because of Arizona’s dominance over its rivals.

This ranking of the Top 5 Sun Devil killers takes into account the difficulty of achieving that success. 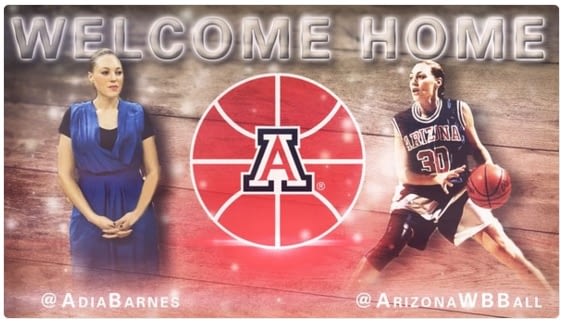 Barnes capped her undefeated playing career against ASU with a 92-57 thrashing, not showing much love to the Sun Devils on Valentine’s Day 1998. The 35-point margin tied the largest in school history against the Sun Devils.

She played when ASU coach Charli Turner Thorne started her career in Tempe in 1996-97. Including Friday’s win, Barnes is 5-0 against Thorne as a player and head coach.

Barnes had a game-high 25 points in that last game, of which ninth-ranked Arizona forced ASU into 41 turnovers. Before the game, Barnes was presented a ball commemorating her 2,000th career point achieved in the previous game at Washington.

During “The Streak”, Chuck Cecil was one of the players who ASU fans loved to hate.

His 100-yard interception return for a touchdown in the 1986 upset of Rose Bowl-bound ASU is the most obvious highlight of his contribution to swaying the series momentum toward the Wildcats.

In the 24-24 tie in 1987, Cecil recovered the ball at the ASU 13 late in the game after punter Mike Schuh dropped the ball without kicking it. Schuh then kicked the ball on the ground and Cecil pounced on it. The led to Gary Coston’s last-second field goal that tied the game.

Cecil also intercepted a pass by thrown by Jeff Van Raaphorst (who also threw the 1986 pass that was picked off by Cecil) with 1:03 remaining in 1985 at Tempe preserving the Wildcats’ 16-13 advantage.

Smith defeated ASU in Tempe on last-second heroics in consecutive years in Olson’s first two seasons at Arizona — 1983-84 and 1984-85.

In the first season, the Wildcats were 5-15 overall, only one win more than the previous year’s victory total in Ben Lindsey’s 4-24 season, before Smith made the winning shot against the Sun Devils that bounced on the rim before finally falling with a second remaining. Arizona’s 65-64 win over ASU, completing its first season sweep over the Sun Devils since 1969-70, put the Wildcats in motion toward where the program stands today.

In the following season, Smith completed one of the most improbable comebacks in Arizona history.

Smith converted on two traditional three-point plays as part of Arizona’s winning rally after ASU led 60-53 with 37 seconds remaining. There was no 3-point line at that time, which made the rally even more remarkable.

He scored and was fouled with 26 seconds remaining. His free throw cut the lead to 60-56.

The late Bobby Thompson, an ASU guard who is the son of the former Arizona all-star tailback with the same name, missed the front end of a one-and-one free-throw situation and Pete Williams grabbed the rebound. Arizona’s Morgan Taylor made a 20-foot jump shot with nine seconds left to cut the lead to 60-58.

Williams deflected the inbound pass and Smith emerged with the ball after a scramble. His scoop shot banked in while he was fouled by Thompson with two seconds remaining. His free throw gave Arizona the miraculous 61-60 victory.

White was 3-0 against the Devils, beating ASU quarterback Jake Plummer each time.

White directed a 34-20 victory in 1993 as Arizona overcame a small second-half deficit.

In 1994, he led the Wildcats back from a 12-point fourth-quarter deficit to win 28-27. He played with a injured throwing shoulder that required a shot during the game.

White was 21 of 26 for 284 yards and five touchdowns in the fourth quarters of those games.

“I can’t pinpoint why that happened,” White told AllSportsTucson.com’s Anthony Gimino in a 2008 Tucson Citizen interview.

“People talk about being in the zone. Who knows why? I know I always enjoyed those situations. . . . You do what it takes to prove you can win the ballgame.”

He completed 66 percent of his passes in three years against the Sun Devils. Against everybody else, he completed 50 percent.

“He was a Sun Devil killer,” said former receiver Richard Dice, one of his primary targets.

One of the most memorable quotes of “The Streak” was Zendejas’ line of “I’m pretty sure ASU fans hate me by now,” after he kicked two fourth-quarter field goals, including a 57-yarder in 1985 that kept the Sun Devils out of the Rose Bowl.

“Every time we’ve needed to beat ASU since I’ve been at Arizona, I’ve been able to come through,” Zendejas told reporters after the 1985 game. “I’m glad to do it.”

Zendejas’ 57-yarder tied the game at 13 with 9:40 remaining. He made a 52-yarder but had to try again 5 yards deeper because Arizona was flagged for illegal motion. He made a field goal from 32 yards with 1:43 remaining to give Arizona the lead. Cecil made his game-saving interception after that.

That’s five crucial fourth-quarter field goals in a three-year stretch for Zendejas, including two from beyond 50 yards with a 57-yarder and a last-second clutch kick. One of the kicks in 1985 knocked ASU out of the Rose Bowl. He also made two field goals in Arizona’s 28-18 win over ASU in 1982, starting “The Streak” and keeping the Sun Devils from smelling roses.