Be prepared. Or here is your warning: The Rich Rodriguez you’ve seen on the sidelines at Arizona Stadium and beyond may get ramped up even more.

Yes, that sideline-stalking, play-card-to-his-mouth-holding coach now in his sixth season might be more intense than ever. Last season’s 3-9 season didn’t sit well with the coach who absolutely hates to lose. 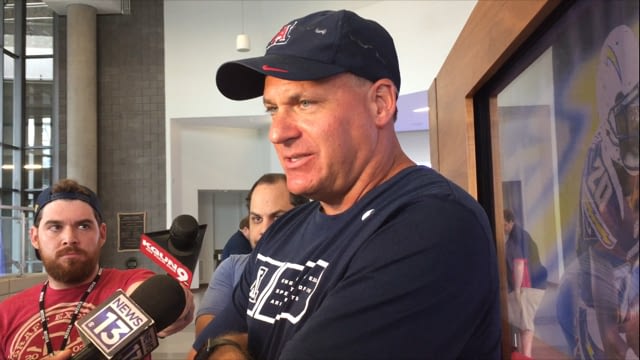 “I’m going to be mad as soon as we lose one rep,” said Rodriguez on Sunday in meeting with the local media for the first time. “I’m not sure who I will be mad at – the offense or the defense. I can’t win or maybe I can. If the defense does bad I’ll be mad if the offense does bad I’ll be mad at the offense. Maybe I should have it the other way and be happy for the other side. If they both play terribly, I probably won’t even talk to you guys (the media).”

Not like that hasn’t happened before through the years. At least he’s warned us now. The guess is there will be days like that when “mum” is the word. With the media predicting Arizona will struggle this year – limp to the bottom of the Pac-12 South – It could be a long, long season.

So, he’ll have to find that extra gear where he will be even more intense in finding a way to get his guys to play harder, smarter and faster.

“We talk about hard edge and all that … and I don’t want to say that we’ve lost (it) but there’s another level we have to get to,” Rodriguez said. “I’ll appeal that to them starting (Sunday).”

But, don’t expect any Dr. Phil moments. Instead, it might be some needed Tony Robbins moments. After last year’s debacle of a season, seemingly most everyone (not quite but it felt that way) jumped ship. From players to coaches, they found respite somewhere else.

What you want to read into all that just a day before the entire team meets for the first time since the spring, well, is up to you. But, in my mind it’s not good.

Success comes from stability; little comes from transition. And Arizona is/was full of it.

This will tell you everything. Before talking to the media on Sunday afternoon, he had just had finished an 80-minute workout with about 50 – yes, 50 newcomers. I can’t remember that ever happening. And I’ve been here 30 years.

“Even though they were half-confused I think they got a lot out of it,” Rodriguez said. “At least they got a feel for what one of our practices is like.”

The road ahead will only get tougher when they start getting ready for their first game in early September. When asked what he’ll tell them when they are all gathered, Rodriguez said he’ll challenge “their competitiveness” and tell them they need to play with “a chip on their shoulder with having something to prove.”

He added, “We all have something to prove.”

Particularly after last year … one that had fans, non-fans and everyone in between wondering what will happen this season. In truth, it’s all about victories and butts in the seats. If they don’t win, who will show up? Last year was a perfect example. Now, Rodriguez is on the hot seat – although it’s just on the warmish side heading into the first week.

Is starting this season feel any different than any other year in his 20-plus years of being a head coach?

“I don’t know if you go into it any differently, but to say you can’t erase the bad feeling you had last year until you win games this year, it should be painful and we should have a chip on our shoulder all the way through the season,” he said. “I think our guys will do that just judging how spring (practice) went and summer workouts (went). No question we have a lot to prove, starting with the coaching staff. I’m anxious to start proving that.”
The clock has officially started.