It’s very likely Chris Gronkowski found out early – perhaps in Arizona’s Eller College of Management – that necessity is the mother of invention.

He put that to use a few years after graduating and playing in the NFL when he created the Ice Shaker, a stainless steel, double insulated, vacuum-sealed water bottle and protein shaker cup.

The Ice Shaker holds ice for more than 30 hours at room temperature.

“The summers in Texas are hot and so are the gyms,” said Gronkowski , 30, in a telephone interview from Dallas. “The bottles I had had condensation in the cup holders. There were sweat bead rings all over. And all I wanted was a good sip of water.” 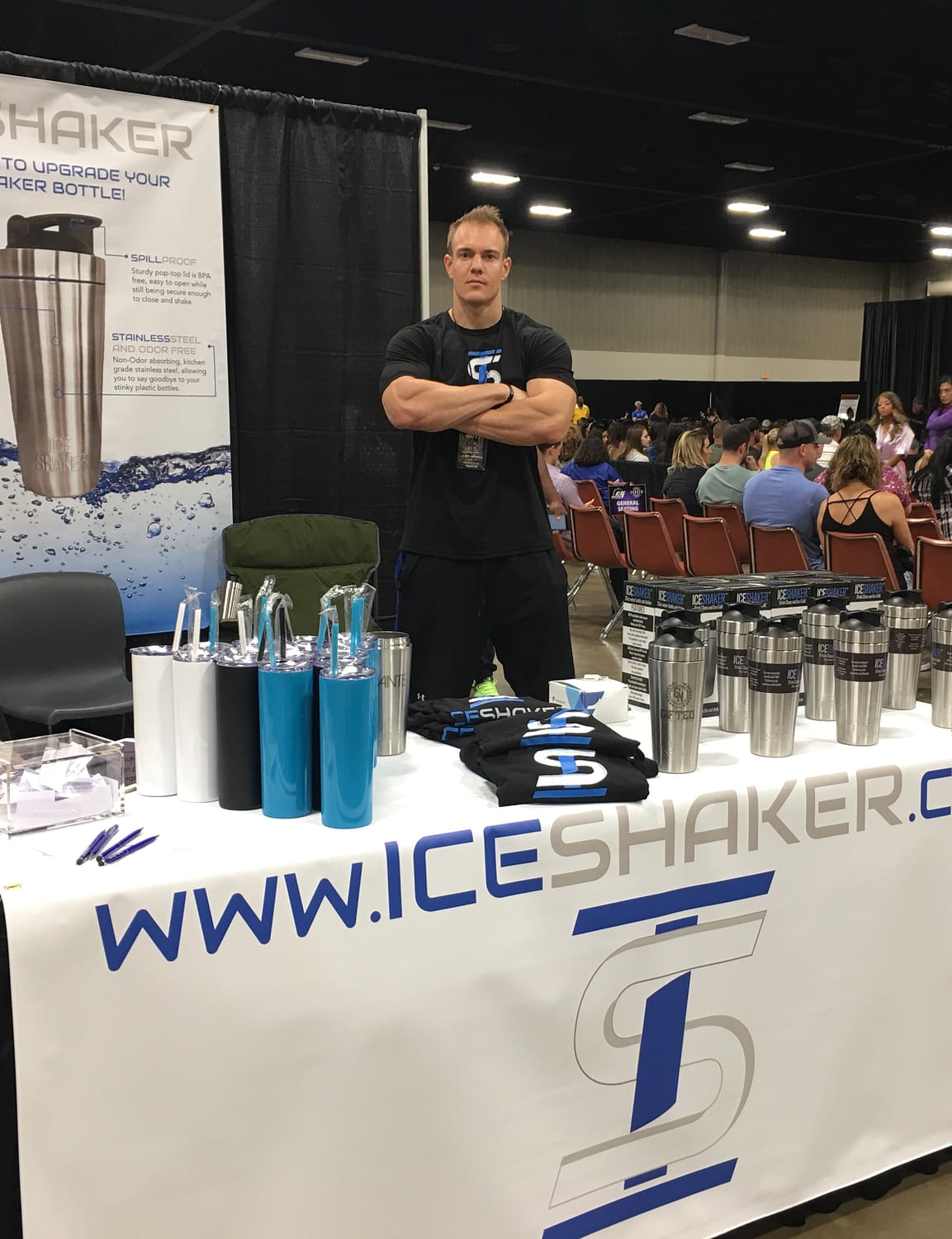 Chris Gronkowski poses with this Ice Shaker’s at a recent Expo.

With nothing on the market – or at least not any to satisfy Gronkowski – he created his own.

“At that point, I thought, ‘I’m going to make the best shaker bottle I can,’” he said.

After several months and a few prototypes, he thinks he has with Ice Shaker.

He does have a bunch of fans on the UA football team, including head coach Rich Rodriguez, who has his Ice Shaker in his office. All the players have one, each engraved with their names on it.

“I use it and you see our guys use it,” Rodriguez said this week. “I endorse 100 percent. Go get your Gronk cup.”

Gronkowski likes the enthusiasm and over the last few months on the market others have liked it as well.

Gronkowski with Ice Shaker in hand.

“We gained some trust and after that, it’s been through the roof,” he said. “Reviews are strong.”

It wasn’t always easy in terms of getting the word out even with the last name being Gronkowski and having a brother who “is our biggest fan.”

“He gives us a shout out every once in a while,” Chris said. “It’s a great connection. It’s not just for working out. It can be used for pool parties, cocktails … everything.”

That’s why he created it, in addition to keeping his ice cubes cold for a very long time, no condensation and no smells after the cup has been sitting there a day or two later.

Still, not all good ideas are met with rounds of applause.

“I loved it,” he said shorting after creating it and it getting on the market. “When it came out I thought I’d get the same reaction that it would be the greatest thing ever. It doesn’t absorb odor like the plastic ones do. I thought people would love it, but truth be told no one really heard about it. There wasn’t a brand. I thought I’d blow it off the roof and that’s not how it was.”

Then after a couple of months – after getting into fitness expos and the reviews – things took off.
It’s likely he knew that would happen, given his background at Eller, where in 2009 he received his accounting degree.

“It was great because you have to take classes for everything … finance, marketing, making for a well-rounded game,” he said. “I knew what I had to do (including) keep my books.”

After all, his first thought was being a tax guy for NFL players with a plan of getting his CPA. And he knew the NFL given he played a few years (Dallas Cowboys, Indianapolis Colts and Denver Broncos).

But then the Ice Shaker came about, given his family’s history in the sports and fitness industry. The Gronkowski name is pretty big in the northeast. Dad, Gordy, is president of G & G Fitness Equipment, a 14-store fitness equipment dealership. It’s been around 26 years. The family recently started Gronk Fitness, as well.
“Of course,” he said, “the name helps (in sales).”

A good idea doesn’t hurt, either.