We have reached the 50-day mark until the Arizona Wildcats kick off their 2018 season under new coach Kevin Sumlin.

The season kicks off when Arizona hosts BYU on Sept. 1 at Arizona Stadium. 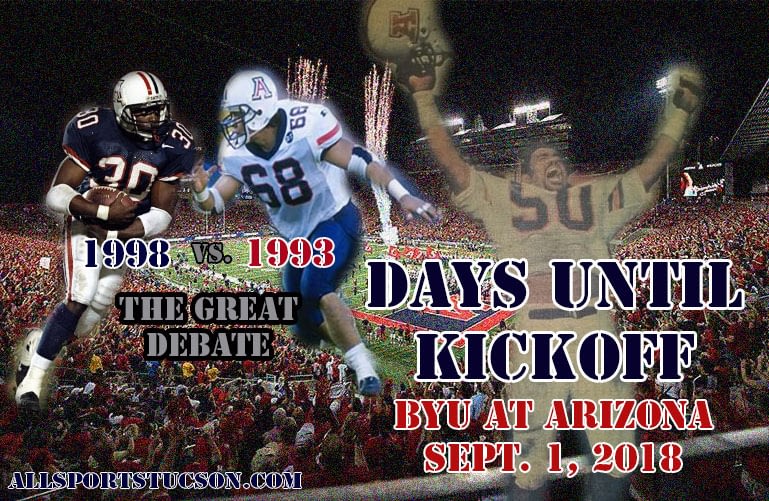 Both teams were coached by Dick Tomey.

Let’s dive right into this debate with polls dealing with positions. First up: Offensive lines.

1993 offensive line: LT Mu Tagoai, LG Pulu Poumele, C Hicham El-Mashtoub, RG Warner Smith and RT Joe Smigiel. Notes: Three of the linemen have sadly passed away — Tagaoi, Poumele and Smith. … Smith was a first-team All-Pac-10 selection in 1994 … El-Mashtoub was a second team all-conference pick in 1994 and was selected in the sixth round of the 1995 NFL draft by the then Houston Oilers.

1998 offensive line: LT Edwin Mulitalo, LG Steven Grace, C Bruce Wiggins, RG Yusuf Scott and RT Manu Savea. Notes: Mulitalo was a second team All-Pac-10 choice in 1998. He was drafted in the fourth round by Baltimore in 1999. He recently became the first former UA football player to become a head coach at the college level at Southern Virginia. … Grace was a second team all-conference pick in 1999. … Wiggins was also a second-team choice. … Scott was a 1998 Football News second-team All-American and an Associated Press third team All-American. He won the Pac-10 Morris Trophy in 1998 as the league’s best offensive lineman. He was a first team All-Pac-10 pick that year. He was also selected in the fifth round of the NFL draft by the Arizona Cardinals. … Savea was taken in the seventh round by the Cleveland Browns.

— With it being the 50th day until kickoff, the best player to wear No. 50 for Arizona? That can be answered in a couple of ways. In terms of most decorated, center Paul Hatcher (1954-56) was a two-time All-Border Conference selection and is a member of the Arizona Hall of Fame. In terms of a player who has meant the most to this community — and was a contributing force on the field especially in Arizona’s memorable 1982 season — that has to be former defensive tackle/linebacker Julius Holt.

Holt is the director of Tucson Youth Football (TYF), which helps the community’s youth mature and prosper in a competitive setting. He played on the 1982 team that upset No. 9 Notre Dame in South Bend, Ind., and No. 6-ranked ASU, preventing the Sun Devils from reaching the Rose Bowl. That team also tied No. 8 UCLA and nearly beat No. 16 USC in a 48-41 thriller. This was done under the cloud of an NCAA probation that would be served in 1983 and 1984 for violations from the previous staff.

Wearing No. 50 this year is sophomore offensive lineman Josh McCauley, who saw action as a reserve in three games last season.