Salpointe coach Dennis Bene and one of his top assistants, associate head coach Al Alexander, tried as best they could to get Bijan Robinson to move quickly at Sahuaro last night.

Evidently, Robinson’s fans, most of them in middle school or younger, are the only ones who can stop Texas-bound running back.

Indicative of his character, molded by his mom and grandparents, including Cleo Robinson, a Marana and NAU legend who became a Pac-10/12 referee, Robinson is making a habit of trying to accommodate all of the young fans.

Bijan Robinson crowded by young autograph seekers. Accommodating as always. Last week, Salpointe accidentally left him behind at Tucson High because of this, according to Salpointe's coaches. pic.twitter.com/DTz72UVOrH

Salpointe’s coaches understandably do not want him to miss the team bus.

“We accidentally left him behind last week (at Tucson High) because of this,” Alexander said incredulously with a smile as Robinson posed for pictures and signed autographs.

Robinson had another in a long line of dominating performances in his 40-game career at Salpointe to this point in the 58-13 win over Sahuaro in a matchup of two top 10-ranked teams in the AIA’s Open Division ratings that came out this week. Salpointe is No. 2 and Sahuaro is No. 7. 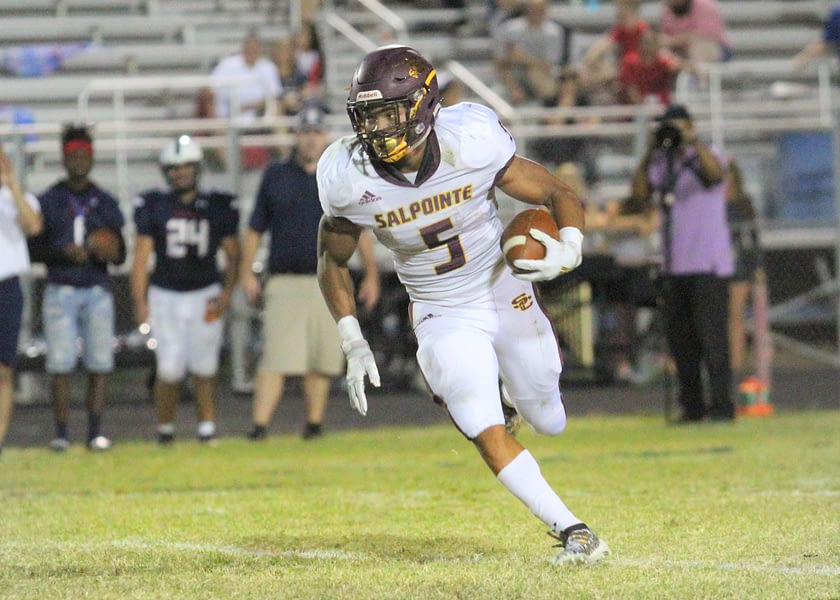 The Cougars (6-1, 1-1 4A Kino) should not drop too far based on the Lancers’ rating. CDO, ranked No. 11, hosts Sahuaro Friday in what could be a battle of two top 10 teams. The Dorados are 6-0 after winning at Catalina Foothills 34-21 in their 4A Kino opener last night.

Robinson’s 130 yards on nine carries — all in the first half because he sat after Salpointe built a 51-7 halftime lead — gives him 5,924 in his career. That broke the Arizona big-school (Class 4A-6A) record of 5,878 set by former Tolleson standout Marcus Thomas from 1999-2002. Thomas went on to star at UTEP and was selected in the fifth round of the 2008 NFL draft by the San Diego Chargers.

“It’s a blessing to break his record, but it’s more of a team effort. It’s not individual for me how hard we work in practice to try to get a record like this,” said Robinson, who finished with 291 all-purpose yards and five touchdowns. “It’s a blessing to celebrate it with the team.”

Robinson is at 1,123 yards rushing this season on only 48 carries (average of 23.6 yards per carry). He is on pace to become the first running back in the state to have three 2,000-yard seasons in his career.

Former Saguaro and current Arizona Cardinals standout Christian Kirk graduated in 2014 with a big-school state-record 103 career touchdowns. Robinson, with 96, is only seven touchdowns from that state record. Jahn graduated with 112 career TDs to lead the lower levels.

What made Robinson more dangerous last night was his season-high 57 yards receiving on two passes thrown by impeccable senior quarterback Jackson Bolin, who was 6-of-6 last night for 153 yards and two touchdowns.

Robinson was targeted in only one game previously this season, against Cactus on Sept. 20 when he had two catches for 54 yards.

“Just trying to move him around and get him in space,” Bene said of the emphasis of trying to get Robinson into the passing game. “Teams want to key on him, so you know, get him out in space and let him make some plays, get seven or eight guys away from him and allow him to make some plays.” 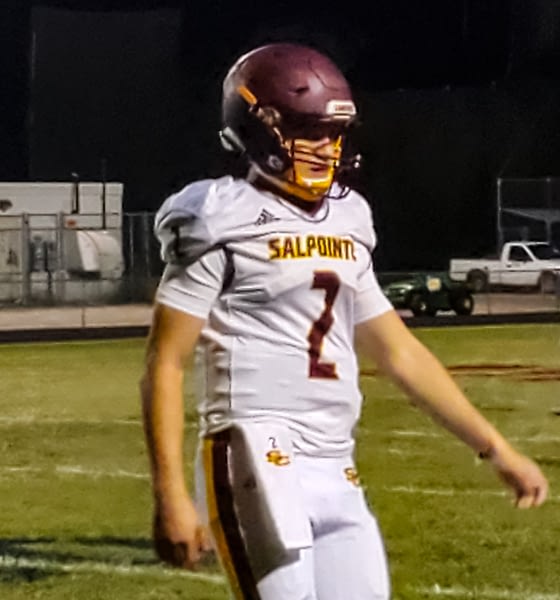 Share Tweet Friday night went like most Friday’s for the Salpointe football team with a blowout win. However, there were many storylines throughout the night with Bijan Robinson breaking the state rushing record, to the Bourguet brother being eligible the first time all season. It was a wild night i…

One of Bolin’s scoring strikes was a 31-yard play to Robinson, who caught the ball surrounded by three defenders. Another was a 22-yard connection with Ohio State recruit Lathan Ransom, who as a safety made a bone-jarring tackle of a Sahuaro runner with the pop likely heard on nearby Camino Seco.

A college quarterback would gladly take that formation.

Salpointe coach Dennis Bene talks about the win over Sahuaro, the Lancers" No. 2 rating in Open Division, Bijan Robinson's threat as a receiver out of the backfield and senior QB Jackson Bolin's impeccable passing. pic.twitter.com/EkScMqEFQh

Salpointe stacks up with plenty of college-level talent, including offensive linemen Jonah Miller (undecided as a junior) and Bruno Fina (UCLA commit). Many of the seniors will continue their careers somewhere at the next level such as Chang, Witthoft, linebackers Luke Regina and Trent Strong (son of former Arizona baseball player Steve Strong).

Bene, resigning at season’s end after 19 years as head coach at Salpointe, believes his talented roster is not quite No. 2 overall in the state, as based on the Open Division rankings, because only five games have been played and his team is still developing.

“I don’t pay attention to (the rankings); to be honest with you, I think we’re ranked too high,” he said. “I don’t know how they figure it out. I just know our kids are playing really, really well. We hope to continue playing at a high level and take whatever comes our way.”