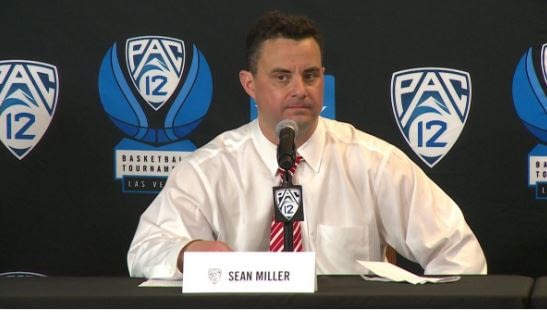 Sean Miller meets with the media after the UCLA game.

LAS VEGAS — When you’re in Las Vegas, you never want to miss the Sean Miller Show after a game against UCLA in the Pac-12 tournament.

There’s his classic work in his 2013 one-man performance of “He touched the ball” and he followed up Friday with a more nuanced routine after an 86-75 victory over the Bruins. Call this one “It’s a Great Time for a Timeout.”

The origin story came two weeks ago in Tucson. UCLA had taken a 77-72 lead on Arizona with one second left when Bryce Alford made two free throws. Five-point lead. One second. Do the math. You don’t have to be John Wooden to know a team has not, will not, can not, come back in those circumstances.

Miller did not forget that move, which he clearly considered grandstanding.

So, with his team up 11 Friday night at T-Mobile Arena, he called a timeout with 0.9 seconds to go.

He was asked about it in the postgame press conference, beginning his answer with a nod to senior guard Kadeem Allen, who had air-balled a 3-pointer late in that loss in Tucson on Senior Night, before UCLA added the clinching free throws.

But Miller, in journalism terms, buried the lede. The TO was all about payback. He would get to that.

Here is the official transcript:

Q. It looked like in that last break you let out a big yell and then a bit of a smile. What was that moment like for you under a second left?

SEAN MILLER: “You know, I love Kadeem Allen, and we didn’t end his senior night the right way. Tonight was about making sure that we paid Kadeem back. And I just wanted him to know how much we love him, how much we appreciate him, how hard he plays. I mean, he had people driving from the state of North Carolina to Arizona for that game, and it didn’t work out. He ended up shooting a basketball on the last play. A lot’s made of that when you miss that shot, and he was playing with a finger that most people wouldn’t even bother to play. So I wanted him to know how much we loved him.”

Oh, and one more thing…

The timeout led to a tense discussion between the coaches in the postgame handshake.

“I guess they’re upset I called a timeout at their place,” Alford said.

“We made two free throws and I didn’t mean disrespect at all. I just wanted to set my defense. But, apparently, he thought I was being disrespectful and that was a means of coming back at us. But I by no means meant any disrespect and that is what I told him after the game. I would never do that.

“I was just trying to set my defense in a hostile environment, making sure nothing happened late in the game that was crazy.

The hottest rivalry in the West just got turned up to full blast.

You’re OK with that, right?

Tune in next season … what will Sean Miller do next at the Pac-12 tournament after a UCLA game?