Fast vs. Slow. Deliberate vs. Tempo. Efficient vs. Effectiveness.

Is there a therapist in the house?

Welcome to Arizona vs. St. Mary’s here at Vivint Arena where Arizona (the speedball) will have to take on some of the roles St. Mary’s has like a change up — one being patience. 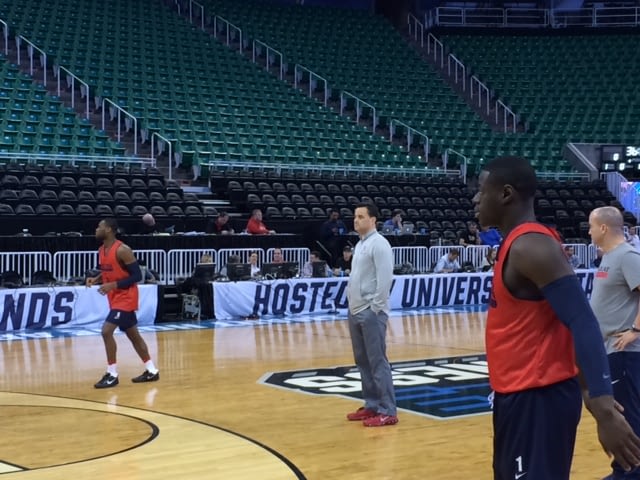 “We’re going to have to be very patient,” said Allonzo Trier. “They’re a very good defensive team. They’re very much like us, as they only play all man (to man defense). They’re very sound. They do a great job of rotating on defense and they are well coached.”

Same, but different. Arizona is in the spotlight; St. Mary’s is overshadowed and “under the radar.”

“I really believe St. Mary’s is one of those,” Arizona coach Sean Miller said.

What is this a sitcom? The Odd Couple?

The biggest statistic is SMC allows opponents just 57 points a game (on average) and Arizona scored an average of 76. Arizona scored 100 on Thursday with relative ease.

St. Mary’s ranks 350th in Ken Pom’s adjusted tempo rating and 350th in time it takes to take a shot. Arizona is 273 in tempo and it takes 18.6 to take a shot (by average).
Clearly it’s an odd pairing for the two. This would have been their second meeting of the season but UA had to cancel a planned out-of-season scrimmage because it had to schedule another home game.

“I don’t know if it’s good or bad that we canceled,” Miller said.

No need. The familiarity is there given St. Mary’s and UA have scrimmaged three times before and according to Miller you don’t really know the Gaels until you play them. That’s when you see how they move the ball. They use a majority of the 30—second shot clock.

“I really believe this, we are up against a great team, a team that’s more than capable of winning several games in this tournament,” Miller said.
He hopes that it’s not against his. Preparation will prevent that, of course.

“They shoot the 3-point shot in a quiet way,” Miller said. “They score more points in transition maybe more than people talk about.”

“It’s going to be a great defensive challenge for us,” Miller said. “…To me, it’s about us being as good as we’ve been all season long defending the other team.”

Clearly, it will have to be better than what it was Thursday night. Arizona wasn’t itself on the defensive end. North Dakota made it interesting in the second half then faded.

What helps is Arizona knows just how disciplined the Gaels can be and have been with positioning, toughness and everything else involved.

“They are a fastball pitcher … they do what they do,” Miller said. “They’re not going to change a lot. (And) they don’t beat themselves. You’ll have to beat them by being the better team.”

“They can be really dangerous,” he said. “And they are big on the boards (and) they have more ways to score. They are pretty balanced. But it’s transition. I think it gets back to those two things.”

It’ll be up to Parker Jackson-Cartwright to make that happen for Arizona. Same goes for Kadeem Allen, Arizona’s pair of point guards who make Arizona go.

“I try to come in to try to change the complexity of the game,” PJC said. “Just try to play fast.”

Damn the circumstances. This won’t be the first time Arizona faces a team that will attempt to go slow. Butler may be the best example. And no need to tell what happened there – Arizona lost.

“It’s tying to speed them up,” he said. “When you play a team like this who runs their sets you have to pressure them to turn the ball over.”

Easy to say, tough to do?

“Yes, it’s way harder than I’m saying it but we’ve been preparing for them and have watched film.”

No word if Oscar and Felix made a cameo.