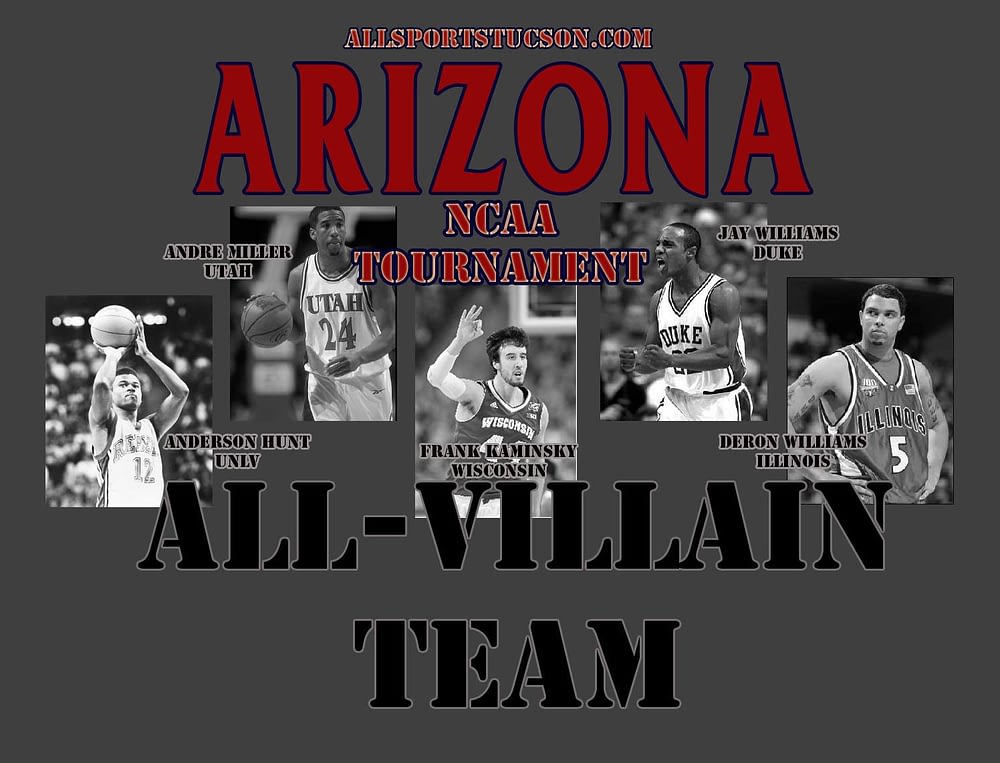 They broke your hearts. Filled your nightmares. Caused you to curse in front of the kids.

The mere mention of their names can make your hands shake, your blood boil, your head explode.

They are the Arizona opponents in the NCAA Tournament who couldn’t miss, couldn’t be guarded, would not be denied … or just flat-out got lucky beyond their means.

They are the villains.

We look back at those foes who you always remember but would love to forget:

Wisconsin F Sam Dekker — Dekker led the way for one of the most epic 3-point barrages in tournament history. Wisconsin made 10 3-pointers in the second half of an 85-78 victory in the Elite Eight, as Dekker’s daggers sealed Arizona’s fate. He nailed a 3-pointer with less than two minutes left to extend the lead to eight and then he hit another with under a minute to go and the Badgers up five. After the last one, Arizona coach Sean Miller just smiled as if to say, “What can you do?” and “Can you freakin’ believe this?!” Dekker made 5 of 6 3-pointers en route to a career-high 27 points, and what really sucks for Arizona fans is that he was a 33.1 percent 3-point shooter for the season. And he isn’t even the most dastardly Wisconsin villain on this list.

G Steve Nash, Santa Clara — Nash was a freshman in 1993 and not necessarily the best player on the team, and his role as a Wildcat killer became greatly exaggerated over the years as his NBA fame grew. But, right or wrong, he’s the recognizable face of the “surfer dudes” that toppled No. 2 Arizona in the first round, which was at the time only the second victory ever in the NCAAs by a No. 15 seed. Nash made only 1 of 7 shots from the field in that 64-61 upset, but give him credit for this: He had six consecutive free throws in the final minute and finished with 10 points, seven rebounds, four assists and only one turnover. He outplayed Arizona’s Damon Stoudamire, who missed all seven of his shots from the field and committed six turnovers.

F Corliss Williamson, Arkansas — “Big Nasty” was just that. He scored 29 points and had 13 rebounds to turn back Arizona 91-82 in the 1994 Final Four in Charlotte. “Williamson was a load the whole ballgame,” coach Lute Olson said afterward. “No matter what we tried to do with him, he gave us problems. He’s just so good and so smart. You can double up on him, and while other guys lose their poise, he doesn’t.” Williamson foiled Arizona’s double-team attempts with five assists out of the post.

F Devin Davis, Miami of Ohio — With a young assistant coach named Sean Miller on the bench, Miami of Ohio stunned Arizona in the 1995 first round behind its dreadlocked 6-foot-8 big man. Davis poured in 24 points and pulled down 15 rebounds in a 71-62 victory, taking advantage of an Arizona team that was without Ben Davis (NCAA suspension) and had to use a clearly-ailing Joseph Blair, who went 14 minutes on a bad ankle.

F Mike Dunleavy, Duke — The skinny sophomore wasn’t among the top three threats on this Blue Devils teams — Jay Williams, Shane Battier and Carlos Boozer were — but Arizona couldn’t stop him in the 2001 national title game. Dunleavy’s burst right after halftime gave Duke a cushion it would not relinquish. He hit 3-pointers in three consecutive possessions and scored all 18 of his second-half points from the 17:02 mark to the 10:08 mark. Dunleavy finished with a team-high 21 points, hitting five 3-pointers, in the 82-72 win. “I knew he was a great shooter,” Arizona’s Gilbert Arenas said in the Tucson Citizen. “He didn’t shoot like that this year because of the other guys. But tonight he did and he hit them.”

G Jay Williams, Duke — He was far from the best player on the court when the Blue Devils beat Arizona in the 2001 national title game (see, Mike Dunleavy, above), but Williams has come to symbolize everything Arizona fans hate about Duke. Namely, Coach K’s team seems to get all the calls. Williams rode the back of Arizona’s Jason Gardner as the players chased a loose ball midway through the first half, but the refs swallowed their whistles. It would have been Williams’ third foul and very likely would have changed the game’s complexion. “What was I supposed to do?” Williams said in February when he was in Tucson with ESPN’s GameDay show. “Tell the referee I fouled him?”

G Andre Miller, Utah — He made a big name for himself in the 1998 Elite Eight as Utah pulled off a stunning 76-51 upset of top-seeded Arizona in Anaheim. With the Utes triangle-and-two defense strangling the Wildcats, Miller posted a triple-double — 18 points, 14 rebounds and 13 assists. “I had never heard much about him, but I think he came out and shocked a lot of people,” Arizona’s Michael Dickerson told me after that game. (STORY: Andre Miller reminisces about 1998 game and his respect for Arizona.)

G Deron Williams/G Luther Head/G Dee Brown, Illinois — Arizona led by 15 with less than four minutes to go in an Elite Eight game in Rosemont, Ill. Then came the most painful collapse in school history, although you have to credit the Illini for hitting big shot after big shot. Williams had eight points and three assists the rest of the way in regulation. Head had eight points, a steal and a block of Salim Stoudamire’s 3-point attempt in the final seconds to preserve an 80-80 tie. Brown had four points, including a huge rebound and layup. Williams hit two more 3-pointers in overtime as Illinois won 90-89. The final damage: 22 points for Williams, 20 for Head and 15 with seven assists for Brown. They combined for 13 3-pointers.

C Frank Kaminsky, Wisconsin — Doing it once was bad enough, but Kaminsky ripped out Arizona’s heart twice. Nobody could guard him. He had a combined 57 points and 17 rebounds in two regional final games, with Wisconsin delivering knockout punches to Arizona in 2014 and 2015. He used his inside-outside skills to make 20 of 40 shots from the field, including 4 of 7 from 3-point range. Arizona had no answer across two seasons, whether it was Kaleb Tarczewski, Aaron Gordon, Brandon Ashley or Rondae Hollis-Jefferson on him. “I don’t really care who is guarding me at this point,” Kaminksy said after the 2015 game.

G Anderson Hunt, UNLV — To me, he’s the No. 1 villain in Arizona’s NCAA Tournament history. The Wildcats were No. 1 in the country; Sean Elliott was a senior; the rivalry against Jerry Tarkanian’s Runnin’ Rebels was at a fever pitch. It was 1989, Arizona was ready to move past a Final Four loss to Oklahoma a year earlier … and then Anderson Hunt happened.

He was a freshman guard, somewhat of an afterthought. He had scored just five points when Arizona beat UNLV 86-75 earlier that season in McKale Center. He entered the Sweet 16 game at McNichols Arena in Denver in an 8 of 32 shooting slump in his previous four games.

But with the game on the line, final seconds ticking away, Hunt dribbled on the right wing and pushed off with his left arm into guard Kenny Lofton. Lofton sprawled onto his back. No call. The Rebels were down two points. With Lofton down, Anderson was open for a 3-pointer. Net. UNLV killed Arizona’s dream 68-67.

Either way, Hunt was the difference, not only for the late soul-crushing shot but for his team-high 21 points, including 5 of 8 3-point attempts.

You can see the final sequence starting at the 1:33:00 mark, if you have the stomach for it.