Former Mountain View High School receiver Isaiah Lovett has always had an Arizona Wildcats career on his mind growing up knowing his dad, Lamont, played for Dick Tomey from 1990-93.

The younger Lovett came closer to his goal today on National Signing Day confirming his commitment to join Rich Rodriguez’s program first as a preferred walk-on.

“Just because my dad was there I had a bias toward them since I was little,” Isaiah said of following his father’s footsteps to the Arizona campus.

Lamont Lovett also serves as the analyst on the radio for Arizona games.

The younger Lovett has also played for Mountain Lions coach Clarence “Bam” McRae, a tight end for the Wildcats in 2003 and 2004.

“He’s a hard-working young man who deserves everything that comes to him,” McRae said. “He’s a great football player who is always willing to put in the work so that people can notice his talents.

“I’m excited he’s staying here locally. It gives me the opportunity to go over at any time to see him play and see him practice and continue to support him as he goes on this journey.”

Isaiah amassed 1,252 yards receiving as a senior with Mountain View. He caught 18 touchdown passes. He is slated to be a receiver for the Wildcats but said “I’ll get on the field how ever I can get the opportunity.”

He said he keeps in contact with Rodriguez and co-offensive coordinator Calvin Magee.

“I’ve been working on everything really,” he said. “I’m going to try to get a little bit faster too and work on the technical parts of my position.” 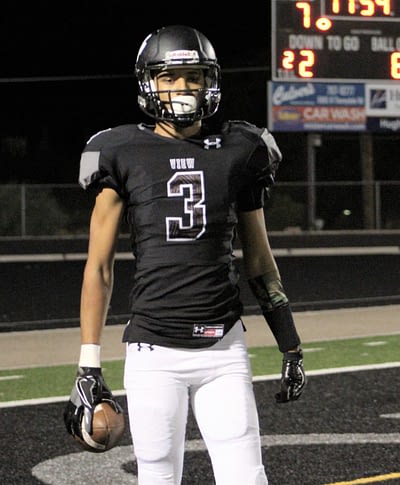 McRae played under John Mackovic and Mike Stoops but like many former Wildcats, he shares a respect of Tomey, who coached many players at Arizona who have become head coaches.

“A lot of the guys who have played at the U of A before me or with me love to give back,” McRae said. “When you have a great coach, a great coach teaches you that coaching is not just about the sport, it’s about turning around and helping others.”

McRae saw that kind of interaction benefit the younger Lovett today on signing day, helping the receiver get one step closer to his dream of a college career.

“For me, signing day is the reward of being a high school coach,” McRae said. “Winning games and all that, that’s for the kids. The kids win the games, they do everything.

“For me, being a good coach is when I see kids carrying on the game and continuing their careers at the university level, that’s the reward for me.”