Allonzo Trier’s return to the Arizona Wildcats for his junior season is one that is met with great anticipation nationally.

Many of the nation’s college hoops pundits believe the leading scorer of the Wildcats could be the the biggest factor to get Arizona back in the Final Four.

Of course, other factors will play a major part in that, including the uncertain return of others such as Rawle Alkins and Chance Comanche (both of whom are testing the NBA draft waters) and the development of a top five recruiting class with center DeAndre Ayton the headliner.

Trier posted this on Instagram the day before his decision to return was announced: “How could you hate me, I beat the odds, I wasn’t even supposed to make it this far.” 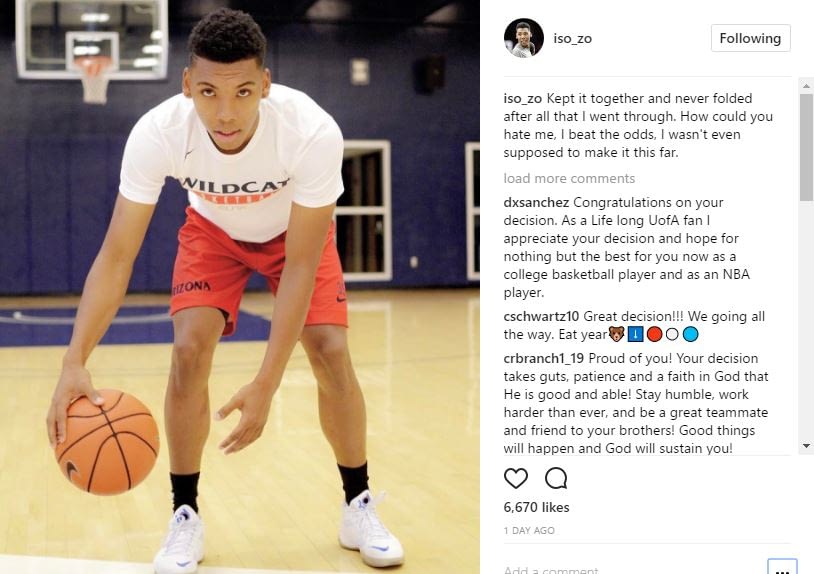 Trier’s social-media bout with critical fans is well-documented. Seems to fuel him.

@greersb Yea sure you were. Yesterday you were trying to clown me, now I announce I'm staying and I'm a hero.

National title or bust for Trier, who if he gets Arizona to the Final Four, will be in greater demand in the NBA.

Also, Trier's mother says he's all in and committed to bringing home a national championship to Arizona…

Allonzo Trier is returning for his junior season.

This is squarely on his mind. pic.twitter.com/MKsOPaFqx6

This is the way of the world in college hoops in which the leading scorer rarely returns because he is a one-and-done player.

As with any team with many new players, chemistry is always a concern from the start but Sean Miller has proven he can mix the egos together.

Interesting that the return of Trier and Michigan State’s Miles Bridges impacts the future of five-star wing Brian Bowen, who may still have Arizona on his list if Rawle Alkins goes to the NBA.