With the announced return of Arizona sophomore Rawle Alkins, the Wildcats will have at least three players in their starting lineup who could be drafted by NBA teams after next season.

Alkins at the wing, Allonzo Trier at shooting guard and freshman sensation DeAndre Ayton at power forward provide Sean Miller quality pieces to one of the best starting lineups since he came to Tucson in 2009.

If they indeed are drafted next year, it would be the first time time at least three Arizona players were selected in the NBA draft in one season since 2001, when four Wildcats were selected: Richard Jefferson, Gilbert Arenas, Michael Wright and Loren Woods. 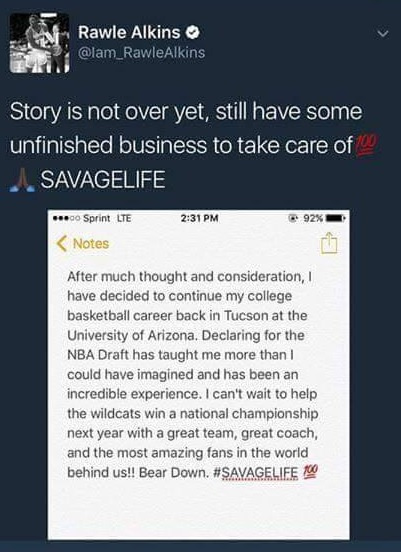 Add to Trier, Alkins and Ayton two seniors — point guard Parker Jackson-Cartwright and center Dusan Ristic — and Arizona shapes up to have one of the most talented and experienced starting lineups in the nation.

The reserves can start for most Division I teams. Miller also has one scholarship to fill, although it is unlikely Pitt transfer Cam Johnson or five-star wing Brian Bowen will join the Wildcats with Alkins and Trier occupying their positions on the perimeter.

Backing up Jackson-Cartwright at point guard: Four-star freshman Alex Barcello. In Miller’s time-sharing system, Barcello will get his fair share of playing time spelling Jackson-Cartwright. Fan favorite in the making because of his all-out hustle.

Backing up Trier: UNCAsheville transfer Dylan Smith. Big South All-Freshmen Team member in 2015-16. He led UNC Asheville in scoring at 13.5 points per game as a freshman after playing in all 30 games during the 2015-16 season. Shot 82.6 percent from the free throw line and scored team-high 14 points against eventual national champion Villanova in the 2016 NCAA Tournament. Finished the year 81 of 232 (.349) from beyond the arc. Four-star freshman Brandon Randolph makes Arizona go three-deep at this position but also can spell Alkins on the wing.

Backing up Alkins: Four-star freshman forward Ira Lee is listed as a power forward but at 6’7″ and 220 pounds, he can play on the wing as well. He has the ability to go strong inside and shoot from the outside. Former Salpointe and Lipscomb standout Talbott Denny, coming off an early season-ending knee injury last season, gives Miller a reinforcement at 6’5″ and 215.

Backing up Ayton: Senior forward Keanu Pinder, who showed promising flashes late last season. He should provide Arizona more of an active defender inside that was sorely missing for most of last year.

Backing up Ristic: Not one player in particular but Miller has the option to use Ayton at the post and Pinder at power forward to go with a more athletic look.

One name to ponder: Kameron Rooks, son of the late great Sean Rooks, one of the best big men in Arizona history. Kameron is an immediate-eligible graduate post player who is leaving Cal with one more year of eligibility left. With his history of knee issues, Kameron will not play an abundance of minutes, but could play just enough to help Miller’s need for a reinforcement at the post. This is just me speculating. Nothing has been reported of Kameron having interest in Arizona or vice versa but it’s a nice thought, right?